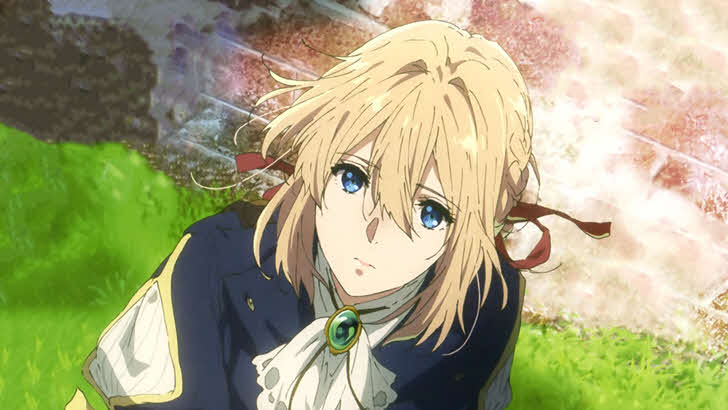 Let us guess – you’re smitten with Evergarden and you’re coming down off a high created by it. We’ve got your back, no worries!

Let’s recap, shall we. What the creators promised: a new waifu candidate, a world of bygone eras, a little steampunk reference, war, romance and an endless amount of drama. And delivered they did!

It caught the audience’s attention for a reason: at the Kyōto Animation Awards Violet Evergarden was the first to win and reap in its category! Allegedly, the story touched the jury so much, it gave them an experience tsunami full of emotional avalanches they had never experienced before. The story was brilliantly written.

Through depicting the smallest detail of the environment, it outlined a plot in which a former child soldier, Violet, faces her war crimes while learning to feel through the personal stories of others. The following are some of our recommendations for amazing anime that take place in reality and in fantasy world but are similar to Violet Evergarden:

1. A Silent Voice (Koe no Katachi)

These two have a serious tone to their plots. This series is the one to go to when you are looking for a series that is sincere and on the sadder side. Both anime are a fruit of Kyoto Animation Studio that is well known for their great stories, deep characters and amazing animations.

Ishida Shouya is an incurable troublemaker and a true leader in school where a new student arrives in the person of the deaf little girl, Nishimiya Shouko. From the very beginning, our hero has been disliked by the girl trying to communicate through her notebook, which is further compounded by the fact that Shouko’s disability places a considerable burden on the entire class.

Soon, the abuses and humiliations aimed at Shouko come together, and of course Ishida is the main driving force behind the abuse, until he feels on his own skin what it feels like to be excluded. Ishida isolates himself from the outside world because it’s the only way left for him to survive the remaining years of school. Years later there is still a dark spot in his past that he is unable to erase from his memory.

A Silent Voice is not just a brilliantly constructed drama, but a work that penetrates deep into the heart. Not just because it’s main plot, but the many little curiosities it deals with beyond that. The difficult past forces the main character to take a new step in life and learn more about himself.

An instructive story of forgiveness and letting go of the past.

Hatori Chise was ready to give up everything since she never felt free, so she decided she had an easier time living her life as a slave, where others would decide her fate. Now she is determined to sign a contract that allow her to be sold to the highest bidder, as she doesn’t really care what happens to her in the future.

Elias Ainsworth also appears at the auction and offers quite a ridiculous amount in exchange for the girl, so there’s no doubt he can take her home. However, he has other plans with Chise, he doesn’t want to keep her as a slave, but would raise her as his disciple, whom he would love to marry later on.

Chise finds herself in a world where she is finally valued, she is respected and loved, for the same reasons she has been ridiculed and excommunicated so long.

Elias Ainsworth is not a human, but a strange, complex being who probably dates back to ancient times and is one of the wizards doomed to extinction. The plot is about both of them, their strives to help others, it’s about their relationship and how they discover each other’s past.

Just like Violet Evergarden this anime too features strong female lead that evolve from being a lost girl into a strong women. The romantic aspect is present in both cases and both show challenging scenarios that are kept close to reality even though it’s about a fantasy world.

The story of this anime revolves around love and miracles, starring two high school students, Mitsuha and Taki. Mitsuha’s family lives in a small mountain village and runs the local shrine, but the girl longs for a big city life.

Taki goes to school in central Tokyo and is interested in an architectural career. One night they both dream that they are living the other’s life and even though they have never met, they start looking for each other while having to deal with the challenges of their environment, such as school and personal life, but most of all with their own problem: neither of them is passionate about the other, however they slowly begin to take an interest in the other.

They leave messages for each other and try to positively interfere in the other’s life on the days of body swap. A dramatic turn makes it impossible for the two to meet in person and that is where the viewer is hooked. After that comes the sense of danger, the hopelessness, the darkness, which creeps relentlessly among the characters.

The greatest virtue of the film is its sincere charm, the mystical investigation, the worry for the characters and their spiritual growth.

4. Your Lie in April

Just like Violet Evergarden, Your Lie in April is also a heartwarming and a very sad anime story, worth watching or even binging. This story is all about sacrificing everything for the sake of eternal love and acceptance.

After his mother’s death, a young pianist finds himself unable to hear the sound of piano. But everything changes when he meets the love of his life, who is a violin player. The two of them start performing together, until a series of unfortunate events lead to a tragic ending.

Similar to Violet, the main character of this anime, Kōsei Arima is a child without parental love, learning how to live a life after a major change. And both stories will make you sob on the floor, which is a reason good enough for not missing it.

Plastic Memories is by far the most similar anime to Violet Evergarden on this list. However, this story is even more romance-driven and emotional.

Plastic Memories is a story of forbidden love between a human and an android (Giftia): a human boy Tsukasa Mizugaki falls in love with a Giftia named Isla. The main problem is that Tsukasa’s job is to erase Isla’s memory after nine years and four months of life.

This story of a forbidden relationship and love that develops over time is one of the most heart-wrenching anime series that one can find. That is why it should be on every serious list of anime to watch if you love love, romance and pure emotion.