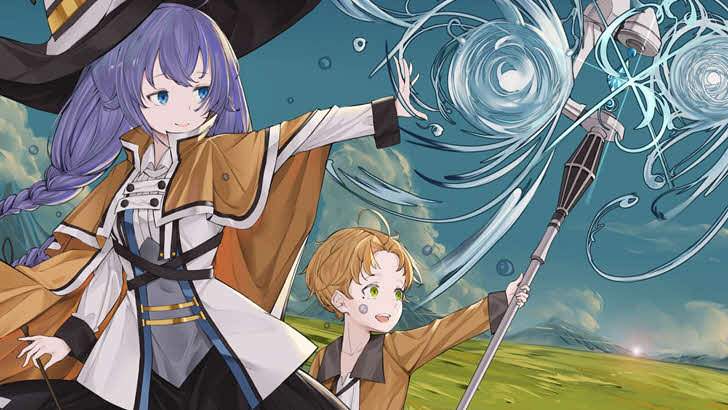 A 34 year man from Japan hits rock bottom as he is evicted from his home. He is disheartened with what his life has become, has no job and wants to do something meaningful for a change. He tries helping a teenager and in the process, ends up dying. But our protagonist’s life doesn’t end here.

He wakes up as a baby, in a magical world where he will have the chance to start over and lead a better life. In Mushoku Tensei we have a classic isekai anime where the protagonist dies and is taken to another world.

1. That Time I Got Reincarnated as a Slime

Satoru Mikami is a 37-year-old man who has a job he doesn’t like, with no way out and who is unhappy with the life he leads. When he dies at the hands of a thief and thinks it’s the end of him, he wakes up discovering that he has been reincarnated in a world of magic and sword – but as a slime!

Now he will have to get used to his new life, although luckily he will have two unique abilities that will help him survive: one that gives him a great understanding of everything around him, and another that allows him to copy the abilities of his opponents.

As you can see, there are huge similarities to Mushoku Tensei so that is why this is our #1 recommendation as similar anime.

Also Recommend: 17 Anime Like That Time I Got Reincarnated as a Slime

2. My Next Life as a Villainess: All Routes Lead to Doom

The series begins like all isekai stories: our heroine dies and appears, in this case reincarnated, in a fantasy world. Katarina grows up and in her tender childhood, when she seems doomed to be an evil young woman, she has a small accident and recovers the memories of her former life.

We get a big surprise when we discover that she finds herself in an otome game to which she was hooked in life. But not as the protagonist of the game, but as the bad guy of the game who always ends up having the worst destiny.

That is where the adventures of Katarina and her group of friends, the main characters of the game, begin. Another great anime like Mushoku Tensei: Jobless Reincarnation but this time with a female lead.

Fifteen-year-old Chise Hatori is alone in the world, without hope or skill, and has lost both family and friends because she has the ability to see supernatural beings.

Her life changes when a non-human sorcerer whose existence dates back to immemorial times ends up buying her at an auction. When Elias Ainsworth invites her to become his apprentice and promises to make her his wife, the young woman’s heart once again harbors some hope.

4. Ascendance of a Bookworm

Motosu Urano was a college student and avid reader who died in an unfortunate and untimely accident. She had finally received the news that she would be working among books as she had always dreamed.

When she comes to her senses she is no longer herself: she has been reborn as Myne, the daughter of a lowly soldier. Her new home is the town of Ehrenfest, in a parallel world where an unquestionable class system gives absolute power to the nobles, who possess the ability to use magic.

The series begins with our protagonist Momonga, who upon being warned of the closure of the Yggdrasil game servers, decides to connect for the last time.

On this closing date, he is the only one left to say a final farewell to the game he has dedicated so much time and effort to. It is also time to say goodbye to his created characters, in charge of serving him and protecting the tomb.

However, not everything happens as it should and instead of ending the connection, our protagonist is transferred to another world. Is it an expansion of the game? A new version? The only certainty is that Momonga and all his dungeon along with the NPCs at his service are in another place, an unknown place.

A nice isekai with a cool twist, just like Mushoku Tensei: Isekai Ittara Honki Dasu this will keep you guessing all throughout.

More Similar Anime shows to watch if you like Mushoku Tensei: Jobless Reincarnation:

6. Knight’s & Magic
7. Wise Man’s Grandchild
8. By the Grace of the Gods
9. Konosuba
10. The 8th Son? Are You Kidding Me?
11. The Faraway Paladin (Saihate no Paladin)
12. Log Horizon
13. Welcome to the N.H.K.
14. Re:Zero
15. Tsukimichi Moonlit Fantasy
16. Ansatsu Kizoku: The World’s Finest Assassin Gets Reincarnated in Another World as an Aristocrat
17. Vinland Saga
18. Spirit Chronicles (Seirei Gensouki)