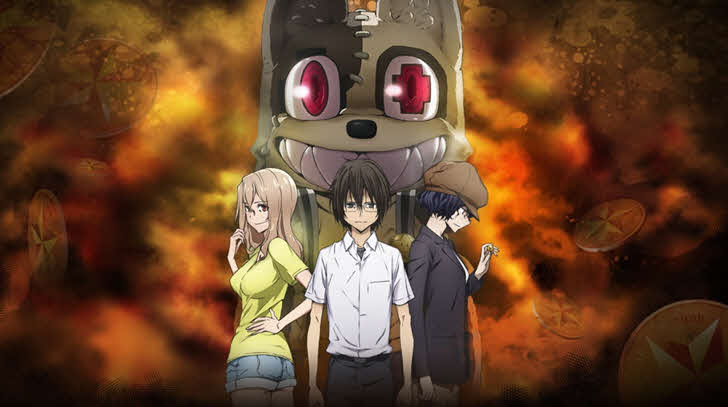 Shuichi Kagaya is lots of things, but precisely human isn’t one of them. He has an innate sense of smell and can morph into an incredibly potent living beast. He does everything he can to prevent standing out and being found out, but no good deed goes unscathed.

His decision to use his power to save a girl will lead to an unexpected path, and the end of his quiet life. He loses his phone in the process, and this will end up costing him, and the wrong people find it.

With very cool action sequences and very interesting character arcs, this is a special anime that many don’t know but soon love once they discover it. Anime like Gleipnir fear characters with special powers that face unexpected challenges. Discover our list below:

Our protagonist Yukiteru Amano, is a very unsocial high school student, who writes a diary on his cell phone. We are told that Yukiteru has some imaginary friends, one of them is Deus Ex Machina and Muru-Muru.

One day Deus gives Yukiteru a diary that can see what will happen in 90 days and unfortunately other people have a diary and compete in a game to the death to take the place of Deus Ex Machina.

Then we get more characters, which is Yuno Gasai, the mythical yandere of this series and that gave birth to this kind of girls. With a phone being at the crux of the story, The Future Diary is a great anime like Gleipnir to enjoy.

In the face of the natural order of things, our concepts of good or evil are meaningless. For some to live, others must die; that has been the unwritten law that has sealed the fate of the cosmos since its very conception.

If we cannot reproach a lion when it kills a fragile gazelle, is it possible to reproach a being that, in order to survive needs to feed on our own species? Nothing will be easy for this poor unfortunate soul, sometimes a hero “by force” and at other times a victim, whose own humanity will be in danger.

Although the witticisms of his peculiar tenant will make us laugh more than once, this is only a momentary relief. It is hard not to empathize with him when he sheds bitter tears, as fate plays a cruel and dirty trick on him by showering him with misfortunes in Parasyte.

Ganta Igarashi while in class sees, through the window, a man covered in blood. Seconds later the man kills all of his classmates, and when he thinks he is next, the killer embeds a crimson crystal in his chest.

Our main character is complex and will have to overcome many challenges, making this a very similar to Gleipnir that will enchant its fans.

The story focuses mainly on Yuya, an average boy, without great aspirations in life and somewhat clumsy.

One day, and by accident he meets Hitomi, a girl who at first glance seems to be very normal. When she is at risk because of Yuya’s companions, he finds it necessary to kill them all by taking his true form: half human half badger.

Leaving only Yuya alive, he ends up entangled in Hitomi’s competitions and has to deal with his and her problems. In turn, Hitomi must take care of Yuya and protect him from all those who try anything against him. An underrated little gem.

Hyakkimaru’s father is an ambitious warrior who grants forty-eight demons the forty-eight body parts of his newborn son in exchange for world domination.

Hyakkimaru who is abandoned to his fate by his parents, is rescued by a doctor who manages to reconstruct him with parts of children’s corpses. As an adult Hyakkimaru decides to recover his forty-eight lost parts, defeating each of the demons with whom his father made a pact.

He is joined in his quest by Dororo, a little thief who at first wants to steal his sword. This is a fascinating anime similar to Gleipnir that has dark tones, well animated fight scenes and a truly captivating story.

More Similar Anime shows to watch if you like Gleipnir: