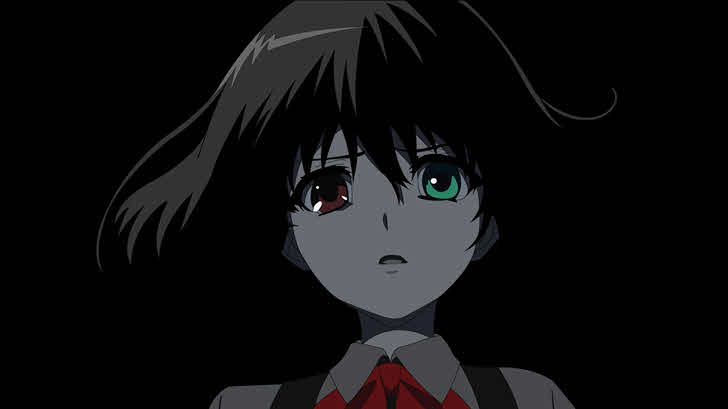 During the year 1972, Misaki, a popular student in class 3-3 at Yomiyama North Middle School, died suddenly in the middle of the school year. Shocked by the loss, his classmates and teachers continue to act as if he were alive. So much so that a strange presence could even be glimpsed in the graduation photo.

In the spring of 1998, a 15-year-old boy named Kouichi Sakakibara is transferred to the same class. There he meets Mei Misaki, a rather strange girl who is ignored by both her teachers and classmates. Unexpectedly, a series of murders causes despair in the class. Kouichi and Mei set out to discover the cause before they become the next victims.

Anime like Another have plots filled with mystery, twists, past and future, where the viewer has to follow along and discover what caused or preceded the unusual events. Read our list below to find out which are our top recommended anime like Another:

Best Anime Shows Similar to Another:

1. When They Cry (Higurashi no Naku Koro ni)

Higurashi tells the story about the so-called Curse of Oyashiro-sama, consisting of the murder of one person and the disappearance of another.

This is fulfilled every year in the quiet village of Hinamizawa since incidents 5 years ago during the festive night of Watanagashi.

Keiichi Maebara and his group of friends become involved in the case of the curse in the various sagas. Each of these sagas reveals various details about the “curse” and has a different ending that usually ends with the mysterious murder of some members of the group.

The story of Mirai Nikki unfolds with Amano Yukiteru as the main character, who is (constantly) accompanied by Gasai Yuno. In the anime we will be able to see the story of the diaries of the future and the survival of their owners. Since, the one who wins the game will take the place of the God Deus, who is the God of time and space.

In a present world lives Amano Yukiteru. He is a lonely young man who usually writes everything he observes daily on his phone. Yukiteru is a friend of Deus, the God of time and space. On one of his visits Deus grants him a special power. This power will allow him to know everything that will happen around him, through his diary.

This is a great recommendation for anime like Another because of the similarity in plot, but also the way the plot unfolds, making it a great choice for fans for the genre.

A village far from the hand of god and a series of deaths without apparent explanation are the idea that nourishes the plot of this anime. We are introduced to the different protagonists of the story and we are shown the first deaths of this in a slow but equally keeping the viewer’s interest.

The main characters (including a young teenager and the village doctor) begin to investigate what is behind these deaths, which are attributed by them at first (at least officially by the doctor) to an epidemic of unknown cause.

Mysterious deaths with an epidemic subplot which is appropriate for current world events makes this a solid choice for fans of anime like Another.

It tells the story of the diclonius, the next mutation or evolution of humans. It has scenes of nudity, and some very nice action sequences.

The story is based especially on the character of Lucy/Nyuu, a diclonius abandoned by her human parents at birth, and constantly despised thanks to her horns by other humans.

This leads her to despise and kill every non-Diclonius being she meets, until she meets Kouta, a human, and their lives change forever. She has a double personality and doesn’t seem to remember much from her past, but she does hold a deep dark secret.

This series tells us small stories of people who are being abused in many ways, physically, psychologically, socio-economically, and even out of contempt and lovelessness.

The victims learn that in the middle of the night you can access an internet portal where you will ask the girl from hell for help, and to take revenge against the person who is making your life unhappy.

This girl is called Enma Ai and by accepting the contract with her she will immediately take the person you hate to hell but in return when you die you will also join them. Quite an original idea that should keep fans of anime like Another well entertained.

More Similar Anime shows to watch if you like Another: