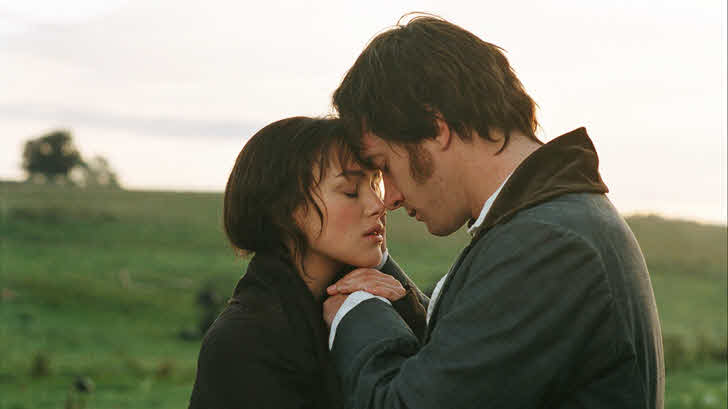 The Bennet family’s quiet life is upended when Mr. Bingley, with his good friend Mr. Darcy, moves into one of the shire mansions, triggering Mrs. Bennet’s obsession with marrying her daughters off to a good match.

But her mother’s plan does not contemplate that her clever and proud daughter Lizzie will decide to hate Darcy after meeting him at the homecoming ball, which will cause their wits and characters to clash, embroiling them in a variety of situations. This is a classic love story showcasing a powerful female lead that fascinated generations.

Movies like Pride and Prejudice have similar love stories or focus on similar characters and their unwillingness to abide by the rules.

Anna Karenina (Keira Knightley) leads the life that every woman in 1874 imperial Russia would desire, even envy. Married to a high official in St. Petersburg, with a son, she enjoys an unbeatable social position and all the luxuries and comforts that her mature husband, Karenin, can provide.

After Anna’s brother Oblonsky asks her to intercede on his behalf to prevent his wife Dolly from asking for a divorce for having discovered one more of his many infidelities, Anna Karenina goes to Moscow where she meets Vronsky (Aaron Taylor-Johnson), a handsome young cavalry officer with whom she has a series of public encounters in which their mutual attraction becomes clear.

She has to tackle everything an out of marriage affair would imply, which makes this a great story to watch and the perfect follow-up to Pride And Prejudice.

In 1795 England, Jane Austen is a young dreamer at the beginning of her writing career. Her stories show her illusion of true love, but in the real world everything is different. Her parents are determined to marry her off so that she can achieve a good social position.

Unexpectedly, the young and intelligent Tom bursts into Jane’s life, turning all her schemes upside down. In an age of social convention, Jane is going to bet on a romance that will mark her work. Jane Austen is one of those writers ahead of her time whose life is little known.

Her stories have always been marked by love and her followers have doubted that she was capable of the great romances she wrote about. This is an obvious must watch for fans of movies like Pride and Prejudice, as it shows us the author of the novel and her own love life.

Jane Eyre takes us back to a time when women had little choice, and Jane, though she tries to suppress the fire within her to conform to the conventionality of her surroundings, cannot help but wonder what lies beyond the world as she knows it.

This film is an adaptation of Charlotte Bronte’s 1847 novel of the same name. Jane’s story begins when she flees Thornfield Hall in the middle of the night, wanders aimlessly in the pouring rain, and finally collapses on the doorstep of Mr. St. John Rivers (Jamie Bell), who and his sisters welcome her into their home, saving her from certain death.

What follows is a story of struggle, strength and resolve, in this timeless classic. A great film like Pride and Prejudice to watch and enjoy with family.

The conflict of lovers, by virtue of social status, is present in all of Austen’s works, but it is most evident in this story.

It tells the story of the sisters Elinor and Marianne Dashwood who, like all the young women of the Austen world, are in search of a husband who can provide them with the economic stability that the society of their times demanded. This is not to say that the girls were bad, self-interested or shallow, but rather that this was the norm in their time.

The point is that these sisters are involved in a series of complicated events, they seem to have their lives figured out but suddenly things change completely, their beaus are not what they thought they were, there is betrayal, pain, a lot of drama and a little romance.

Bridget Jones’s Diary was born as a column by journalist Helen Fielding, who exposed with acid humor the experiences and contradictions of a woman in her thirties who still hasn’t found her place in the world. The success led to an even more successful book; the leap to the screen was a foregone conclusion, which has also been warmly received.

The diary is the excuse to articulate the thoughts of Bridget Jones, young by physical age, childlike by her frequent puerile behavior, and aged by the disillusionment that often overpowers her.

She falls in love with 2 men who will fight for the affection, forming a classic love triangle that will feature both comedy and drama as you follow along. A more lighthearted alternative for fans of movies similar to Pride and Prejudice.

More film recommendations if you enjoyed Pride and Prejudice: