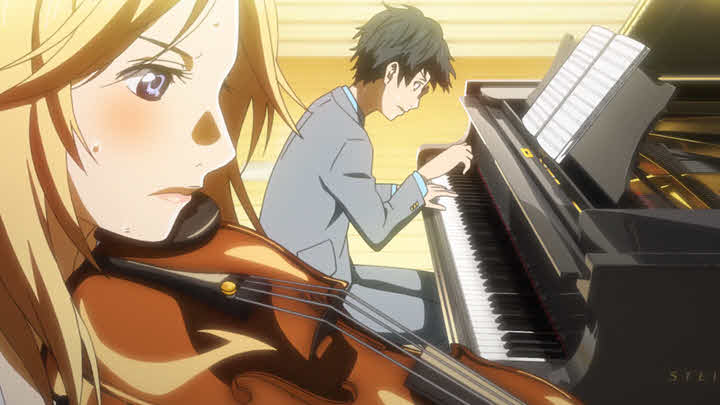 Arima Kousei was born with a gift: he is a prodigious pianist who amazes and inspires in equal measure. However, his talent stifled many aspects of his life, especially during his childhood, as his mother, Arima Saki, instructed him from an early age, forcing him to practice every day in order to achieve perfection. Saki did not hesitate to use violence against her son as punishment for his failings.

Desperate for a show of affection and praise for his efforts, Kousei began to despise his mother, who was ill and soon after passed away. Then guilt consumed him and he decided to abandon the piano. Nothing seemed to be able to pull him out of the pit of despair into which he had sunk.

Then he meets Miyazono Kaori, a violinist of his own age, but with a completely different worldview to his own. Thanks to her and a newfound determination, Kousei will embark on a path of self-discovery, trying to rediscover his love for piano. Anime like Your Lie in April (Shigatsu wa Kimi no Uso) focus on romance, drama and personal growth – some of them with music related setting. Here is our list:

Best Anime Shows Similar to ‘Your Lie in April’:

Nodame cantabile tells the story of several young people who want to become musicians and study at a specialized music college. Our protagonist, Nodame, is a pianist who studies at the music college along with Chiaki, a young man who wants to become an orchestra conductor.

As the anime develops, we will see how they improve every day, meeting more characters who inspire them, support them or put obstacles in their way. We will also see how the relationship between Nodame and Chiaki develops, as they constantly inspire each other.

This is a story about friendship and personal growth that will keep you interested throughout. A great anime like Your Lie In April and our #1 recommendation.

In a future where robots are created to help and accompany humans, Tsukasa Mizugaki is a young man of 18 years who has entered to work in the office of recovery of robots, whose job is to get back the robots that have completed their life cycle of 10 years and need a formatting.

Not doing so their memories and emotions would get out of control, demonstrating superhuman strength and agility and attacking everything around them.

Our protagonist will have to work with Isla, a robot that is about to reach its expiry date – together they will live a romance between human and machine. An unlikely romance that will keep you hooked, especially if you’re a fan of shows like Your Lie In April.

The story is set in the high school music club at Hōjō High School, to which the main character, Haruki Kitahara, belongs. The club is about to close due to lack of members, so Haruki tries to convince the talented pianist Kazusa Touma and the popular Setsuna Ogiso to join and make it to the school festival performance.

What starts out as a music-driven friendship turns into a love triangle in which manipulation, lies and passion play a decisive role in the plot. The twists and turns, together with the music setting make this an obvious choice for fans of anime like Your Lie in April.

Banri Tada arrives in Tokyo after being admitted to a university to study law. Despite seeming like an ordinary guy, Banri actually lost part of his memory in an accident, so he has no recollection of his school life.

Still, Banri wants the chance to start over from scratch, meeting new friends and potential romantic interests. With a quirky new circle, Banri is in for what could be the time of her life. The main character is determined not to let go of the past and to face a new life independent of his former self.

This makes it a very enjoyable series for most of its length, as we focus on the problems and difficulties of the present day, his current relationships and how he reacts to his new companions and feelings towards the girls he meets.

5. The Pet Girl of Sakurasou

Sorata Kanda, a student at Sumei High School of the Arts, is forced to leave the regular dormitories because she is unable to give away the kittens he has collected, which would mean having to stay in the “famous” Sakurasou dormitories.

Rumors abound about their guests: that they are weird, that they are crazy and above all that they are not normal people. Sorata discovers from experience the veracity of the rumors and decides to focus all her efforts to give away the geeks, and thus return to the regular dormitories.

But one day, Sakurasou’s tutor asks her to pick up Mashiro Shiina, her niece, what Sorata didn’t expect is that with this arrival, her goals would take a radically opposite course. A cool and original anime like Your Lie in April that focuses on both comedy and drama to tell a very unique story.

More Similar Anime shows to watch if you like ‘Your Lie in April’: