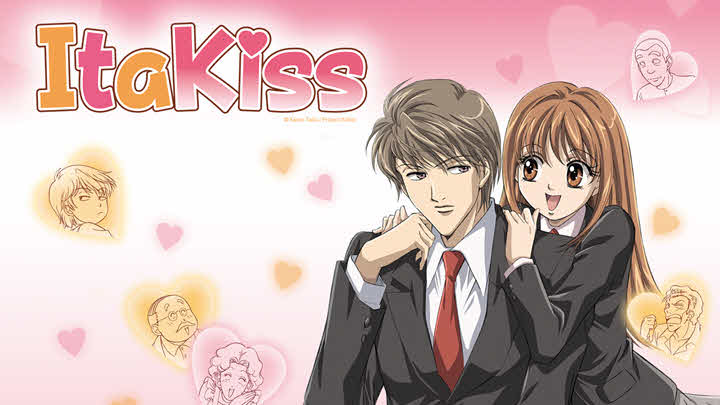 Kotoko is a slightly awkward high school student who has a crush on the most popular and intelligent boy in school, Naoki. When Kotoko plucks up the courage to confess her feelings to him, she is cruelly rejected, since she is a member of class F (the class whose students have the worst grades) and Naoki is from class A.

But everything changes when the house where she lives with her father is destroyed. On the street, a friend of his father’s offers them his house as a temporary shelter until they can move in. What Kotoko didn’t count on, however, was that she would end up living with Naoki’s family.

From that moment on, the two of them will be together day and night and will have to face numerous situations together. Anime like ItaKiss (Itazura na Kiss) focuses on unlikely romances between characters with fun plots that keep things interesting.

The story follows the lives of two students, Risa and Otani. They are the comedy duo of the class. All of this is because of their height – Risa is a very tall girl and Otani is a short boy, that’s why they are so striking.

Because of this, they don’t get along very well at first, but little by little they discover that they have a lot of things in common and that they are very much alike. They fall in love with different people, so it will take them a while to discover what they feel for each other.

This is a heartwarming story showing us that obvious differences mean nothing when two people are similar and perfect for each other. Being in a school setting and focusing on the romantic relationship of two main characters, this is a perfect anime like ItaKiss to watch and enjoy.

Since she was a little girl, Hikari Hanazono trained hard to become a powerful wrestler, and her efforts made her the strongest of them all. However, one day a boy named Kei Takishima came to her house. He quickly defeated Hikari, so now she wants revenge and joins his school – to beat him at all costs.

The academy is an institution for wealthy people and is divided according to the performance of the students into sections from “A” to “F”. Kei and Hikari, along with five other peculiar students, belong to the select group of the academy known as “Special A”, the most outstanding class in the whole school.

The story revolves around school life and the conflicts between the characters in the “A” class. Just like ItaKiss here too the main characters are in different classes, from A to F and they eventually form a romantic relationship.

It tells the story of Miki Koishikawa, a 16 year old student whose parents exchange partners with the Matsura family.

The parents decide to live under the same roof with their children. Miki, who proves unhappy at first and gradually falls in love with Matsura’s son. Over the course of the series they will have to overcome many difficulties and meet more people who will complicate their relationship.

Another interesting story of an unlikely romance in an original setting, this anime like ItaKiss is well worth your time, as it tells a good story with very likable characters.

Clannad: After Story follows the events of Clannad and moves forward in time and tells the story of the anime characters’ entry into adulthood, that is to say, it narrates the events that take place when they all finish high school and enter society. Tomoya Okazaki is our main protagonist. Characterized by being kind, impetuous, very frank, cynical, funny and strong, Okazaki is a very good main character.

He has a very bad relationship with his father, who left him with a half-hurt arm after a fight they had. Nagisa Furukawa is Okazaki’s main love interest. She carries a weak body and that has made her repeat a year and that’s why she is a year older than Okazaki.

She has a strange habit of saying her favorite foods when she’s nervous. A must watch for anyone who likes drama, romance or comedy. It’s a masterpiece.

Also Recommend: 14 Anime Like A Silent Voice (Koe no Katachi)

Misaki Ayuzawa is one of the few females at Seika Boys’ High School, which recently became a coeducational school. Because of this, Miyuzaka becomes the president of the council to give security and confidence to her friends.

However, after being elected she gains a bad reputation among the boys due to her rudeness and fierceness in dealing with them and mediating with the girls’ rights. This will not be true, as our protagonist, due to her family’s poverty, secretly works part-time in a Maid Caffe.

As fate would have it, the most popular boy in the school, Usui Takumi, discovers her and takes an interest in her and her pretty uniform, which leads to some comical and interesting situations. A great anime like ItaKiss that you will be glad you found!

More Similar Anime shows to watch if you like Itazura na Kiss: