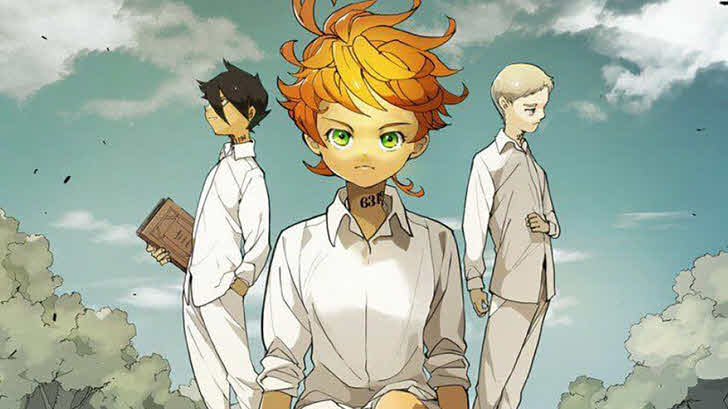 We are presented with the story of boys who grow up happily in an orphanage. They live a quiet, peaceful and comfortable life, with a mother who cares for them all as if they were her own children and gives them the love and hope of being adopted. However, Emma and Norman realize that not all is happy at Grace Field House when they attempt to deliver a forgotten stuffed animal to a little girl whose time has come to leave the orphanage.

As the children embark on this mission, they realize that it is all a lie. The orphanage is a farm that offers the best humans aged 12 and under as saucers for creatures that have a reptilian form. That “Mother” has tricked them all along and her only goal is to make them grow up happy so that their brains will taste better.

Even worse, they are doomed to certain death as the farm is surrounded by a very high wall and escaping their fate will not be easy. Check out this list of anime similar to the promised neverland (Yakusoku no Neverland) that features interesting characters in very unfriendly circumstances, characters that will have to grow and overcome hardship.

1. Seraph of the End (Owari No Seraph)

The anime starts with a post-apocalyptic scenario, the world and its society has collapsed, has come to an end, and all because of a strange virus that, in a matter of minutes, killed all humans over the age of 13, leaving only the children.

At the same time as this happens, vampires make themselves known and begin to feed on the survivors and enslave the children for food, service and livestock, of course. Most of them have resigned themselves to live this way, but not Yuuichirou, he is more than willing to escape from there and kill all the vampires that have caused the situation he is in.

He is not alone; he has Mikaela, his best friend who builds a plan for him, and other children from the same orphanage that he considers his family, to escape from there. As you can see, this has a very similar plot and such it is our #1 recommendation for anime like The Promised Neverland.

The enormous cave system called the Abyss is the only place in the world left unexplored. No one knows the depths of the pit which is inhabited by strange and powerful creatures and filled with ancient and mysterious relics whose usefulness is unknown to modern man.

Generations of daring adventurers have been swallowed by the depths of the Abyss, these adventurers were given the name “Cave Raiders”. In Oosu, the city by the Abyss, lives a little orphan girl named Rico, who dreams of becoming a Cave Raider.

One day, exploring the murky depths, Rico meets a little boy who seems to be a robot, and an adventure ensues. A very fun and original anime that may be even better than the promised neverland and you shouldn’t miss it.

3. Higurashi: When They Cry

In the fictional village of Hinamizawa in June 1983, a boy named Keiichi moves there and befriends four adorable girls: Mion, Rena, Satoko and Rika.

Their days go by normally at school until the town’s most popular festival, Watanagashi, where the town’s deity, Oyashiro-sama, is worshipped. But every year, during this festival, something strange happens: one person disappears and three others die in strange circumstances.

Keiichi gradually starts to get involved in the subject, but perhaps he should never have done so… What are these seemingly innocent girls hiding? What curse does the village have, if it is a curse?

4. Grimgar of Fantasy and Ash

The anime plunges us into a world in which our main characters have no idea where they are, the only thing they know is that they have to adapt to the system or die. So our group of protagonists does what they can to adapt, starting from scratch.

That is to say, they are totally useless at first, but little by little thanks to each one becoming stronger and gaining more skills thanks to their perseverance they manage to become more skilled. But a tragedy occurs that will make them stagnate and wonder how to continue.

As another great anime similar to The Promised Neverland, our protagonists have to overcome a lot of hardship to eventually make it out alive. A great watch!

The story revolves around four girls who decide to sleep over at the school: Yuki Takeya, a very energetic girl; Kurumi, who loves her shovel; Yurii, who brings everyone together; and Megu, the school counselor.

However, for mysterious reasons, the girls are the only survivors of a zombie attack and are forced to stay at the school. But, it’s an anime full of surprises, from the first episode to the last and as the story goes on you realize that it’s not just lolis beating up zombies and running away from them.

As the series goes on it will hook you with its comedy, suspense, characters. An all-around strong anime like The Promised Neverland where the main characters have to overcome hardship to succeed.

More Similar Anime shows to watch if you like The Promised Neverland: