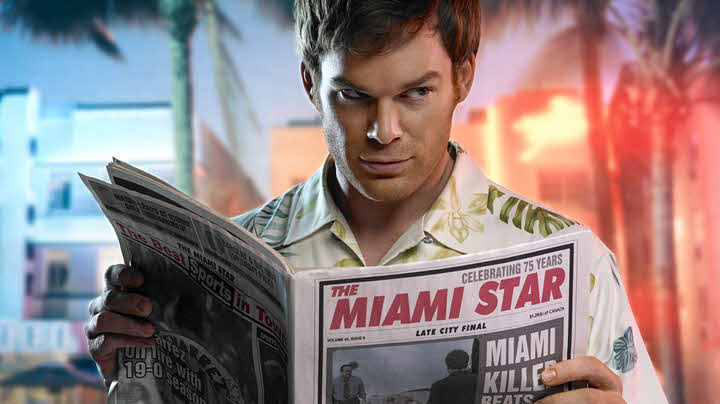 Dexter is a forensic technician working for the Miami police department. He has a sister, is hard working and appreciated by everyone at the police station. But Dexter has a secret – he’s a serial killer, and a sociopath. The way he controls his killing tendencies is by going after criminals and taking them out, thus avoiding to ever kill an innocent.

He calls his dark side “The Dark Passenger” and has regular dialogue with his dead father who acts like his conscience. Dexter is incredibly smart and always tries to solve cases before his colleagues do, while also being very careful with covering his tracks.

Dexter is a well written show about crime, police work, detectives and sociopaths. Shows like Dexter will follow similar topics, with characters that are generally detectives looking to put away the bad guys in different circumstances. Check out the list below:

The show captures the first-person experiences of Agent John Douglas who revolutionized the FBI’s Behavioral Science Unit along with colleagues like Robert K. Ressler.

His project began in the 1970s, known as the “golden age” of serial killings. The task they set themselves was to develop psychological profiles of imprisoned serial killers, obtained by conducting interviews with these subjects.

The objective was to establish common patterns of behavior among them, which would allow the department to advance more quickly in its investigations. Just like Dexter this show too has a fascinating look at the minds of serial killers, and involves a detective who analyzes and categorizes their patterns and behavior. So the similarities to Dexter are quite obvious.

A game of cat and mouse develops between a detective and a serial killer. He hunts young girls who he charms with his charisma, before killing them for pleasure. Meanwhile, she is hunting him, and getting ever so close to catching him.

This show looks at two very smart individuals, one on each side of the law as they try to outplay one another and catch the other off guard. Who will win in the end? A very fun show to watch if you like shows similar to Dexter.

The following tells how Joe Carroll, professor of romantic literature at the university and convicted of the murder of several women, escapes from prison to finish his “unfinished work”.

The police in charge of the case seek the help of former FBI agent Ryan Hardy, who sent Carroll to jail and knows him best. As they move forward with their investigation, they discover that the professor has help from the outside, and that his escape and subsequent arrest are part of a carefully laid plan that has a clear objective. His dangerous followers. Great storytelling and suspense make this a must watch.

Kathy Reichs is one of the best known forensic anthropologists in the United States, due to the novels she has published starring Temperance Brennan, her alter ego that faces the resolution of complicated crimes, using her scientific knowledge about everything related to bones.

These qualities lead her to collaborate as an expert in an FBI case as they start a regular collaboration to solve crimes where the only clues are usually a bunch of bones found in the most unlikely places. Witty and thrilling, this is highly recommended for fans of shows like Dexter and detective shows in general.

Before being a consultant for the CBI, Patrick Jane worked as a psychic, swindling the naive thanks to his great power of observation and without possessing any supernatural power. After appearing on a television, a serial killer decides to kill his wife and daughter, showing the world that Patrick Jane is only a fraud.

Jane joins the CBI as a consultant using his crime-solving skills. Although he is a bit eccentric, he is also very perceptive and many of the theories he believes help solve the cases they are investigating. This in spite of the fact that his methods are unorthodox and often on the edge of the law. Another excellent crime show like Dexter that will keep you entertained and fascinated by its characters.

More TV, Netflix and Amazon Prime shows to watch if you liked ‘Dexter’: