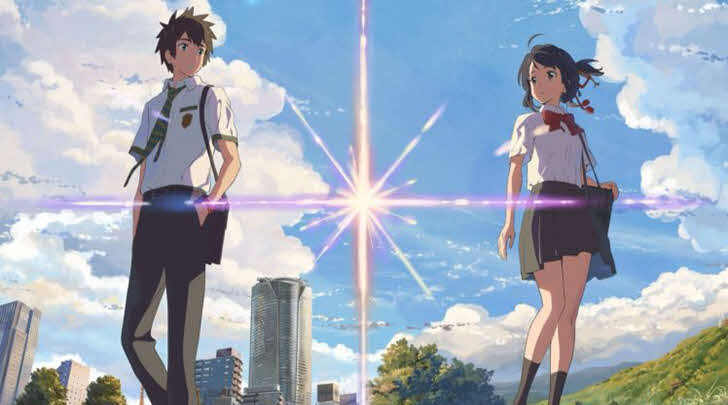 A girl changes bodies with a guy and no one can explain anything. Everything is linked to a shooting star in this wonderful drama fantasy called Your Name. It’s a story about love and about chasing it no matter what, executed to perfection with brilliant editing, storytelling and music.

Every location has so much life and detail, it is something spectacular. You will initially want to see it for that alone, but you’ll stay to watch it because of how great its story is.

Anime movies like Your Name (Kimi no Na wa) have to have interesting female characters, good storytelling and most of all, heart. You need to fall in love with the characters as much as you loved the characters in Your Name. Here is our list:

1. Weathering With You (Tenki no Ko)

Written and directed by the creator of ‘Your Name’, Shinkai’s cinematographic personality is in giving us stories that at first are simple but that become more difficult as the film develops. That’s exactly what Weathering with You is about.

It tells the story of a Tokyo where rain is an everyday occurrence, even causing floods. And in that context we are introduced to a teenager who escapes from his family to go live on his own in the big city where he meets a “weather witch” capable of clearing the skies and making the sun rise.

A powerful story with a lot of symbolism, perfect for fans who want more anime movies like Your Name.

2. The Girl Who Leapt Through Time (Toki wo Kakeru Shoujo)

At first we are presented with the power to go back in time as something great that can be used to fix the stumbling blocks of the past or to experience those moments of happiness again. Makoto, after the initial shock, enjoys and has fun, is able to do and undo anything, but not forget.

As her situation improves, she makes someone else’s worse. For example, because of the disruptions she causes, in part, a boy is ridiculed and abused and his friend ends up being severely beaten by a fire extinguisher. A fascinating look at how our actions can have consequences, this is a beautifully made anime movie like Kimi no Na wa that will linger in your mind for a while.

Our protagonist Yuzuru Otonashi wakes up in the courtyard of a school, without any memory of how he arrived at that place or of his past life. He only remembers his name but soon a student named Yuri Nakamura tells him that he is dead and the place is the “other world”.

Yuri will then ask Otonashi to join the group that he leads to face God and discover the reason why they are in that kind of “purgatory”. The relationship between the characters, the story and the general atmosphere is very similar to anime like Your Name, and you are surely going to love this one as well.

With a romantic theme, Makoto Shinkai – creator of Your Name – manages to create a story in a different way, motivated by the different characters, their feelings and the situations they face.

The main character is Takaki Tono, a primary school boy who becomes friends with Akari Shinohara, from his same class. We will attend the most special moments in which the two of them forge their friendships, often narrated by the characters themselves. Their relationship undergoes an important change when Takaki must move to another city when he passes to secondary school, just when he knows he has fallen in love with Akari.

From then on, the film shows us how these characters will continue to move forward, trying not to disturb their love by distancing themselves.

One Week Friends tells the story of Yuuki Hase, a high school kid who tries to make friends with Kaori Fujimiya, a lonely and seemingly apathetic classmate.

After achieving a first friendly approach, Yuuki realizes his failure when the weekend arrives, as he discovers that Kaori loses any memory she has of her friends every Monday due to a childhood trauma. Despite the many problems this will cause, Yuuki does not stop trying to win her partner’s affection even if she has to become friends again every week.

A love story surrounded by drama and a lot of emotion, a great recommendation for fans of anime like Kimi no Na wa (Your Name).

More Anime Movies to watch if you liked Your Name (Kimi no Na wa):

6. A Silent Voice (Koe no Katachi)
7. Lu Over The Wall
8. The Secret World Of Arrietty
9. Summer Wars
10. My Neighbor Totoro
11. Children Who Chase Lost Voices
12. Millennium Actress
13. Spirited Away
14. Josee, the Tiger and the Fish
15. Words Bubble Up Like Soda Pop