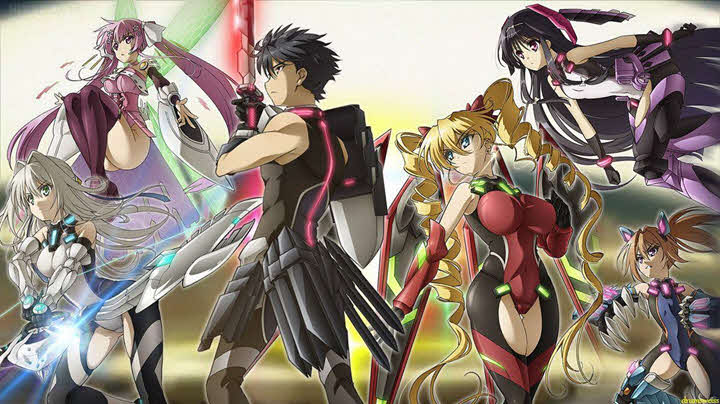 The Hundred is a unique weapon that is capable of destroying the Savage life form. To become a Master of Military Arts trained in the use of the Hundred, Hayato Kisaragi, joins the city-school Little Garden.

There he meets a girl named Emil Crossford with whom he will share a room, and who seems to know him from somewhere. As if he didn’t have enough on his plate, he receives a challenge from the “Queen” – she is the most powerful student in the school, Claire Harvey.

Anime like Hundred involve female characters that are attractive, have superpowers or good with combat, and the action is well combined with comedy. Here is our list:

The protagonist Amagiri Ayato has an unfortunate encounter with a companion in which he accidentally sees her changing her clothes.

It turns out that the classmate she saw in her underwear is Julis-Alexia von Riessfelt, a redheaded foreign student who not only has great talent and is among the top ranked at the academy, but is also royalty in her homeland?

Julis challenges Ayato to a duel to restore her honor, and there we see the great skill with which she handles her fire powers. With similar characters and comedy throughout, The Asterisk War is the perfect follow-up if you want more anime similar to Hundred.

This story is a bit emotional since it begins with a boy named Tooru Kokonoe who goes through a loss that hurts him a lot. This happens in a terrifying incident where his sister loses her life.

He decides that because of this event he wants to be stronger so he enrolls in a school that is not your ordinary high school.

It is a special school where people who enroll have to manifest their souls as weapons called Blaze. This is usually done by human beings who have the ability to control this power, so our protagonist has to learn how to use it. A fun action packed anime, with a good amount of female characters to enjoy.

Thirty years ago a strange phenomenon devastated the center of Eurasia. Since then, small space earthquakes have been taking place all around the world.

Shido a seemingly normal high school student meets a girl at the epicenter of a space earthquake and is informed by his sister Kotori that this girl is one of the spirits that cause space earthquakes when they appear in the world.

He also learns that his sister is the captain of the Ratatoskr ship and that she is recruiting him to make use of her mysterious ability to seal up the powers of the spirits and prevent them from becoming a threat to humanity. A fun little anime which fans of Hundred will like quite a bit.

Lux Arcadia is prince of the Arcadia Empire. He was dethroned by a rebellion a long time ago, that motivated him to go underground and look for ways to subsist to pay the huge reparation that weigh on his shoulders.

After having a temporary job he accidentally falls into the female bathroom of the Royal Academy of Knights. As the girl refuses to have a man in the academy, he challenges her to a duel called the Drag-Ride. After losing the first fight so he is forced to bring out his true power – The Bahamut. As you can see, the synopsis sounds very similar to Hundred because this is an anime very much like Hundred. Enjoy!

The story focuses on Arata Kasuga who lived quietly with her cousin Hijiri in a small village. But one day the sun turned black and everything disappeared.

After some strange phenomena he is found by a magician who explains that the only way to try to recover his cousin is to become a mage. Arata has the potential to become a demon king, so his magic would achieve great things. He is quite a perverted fellow who isn’t shy about sharing his fantasies with other girls. This makes for an interesting series with quite a bit of action and comedy. Great watch if you want even more anime shows like Hundred to binge watch.