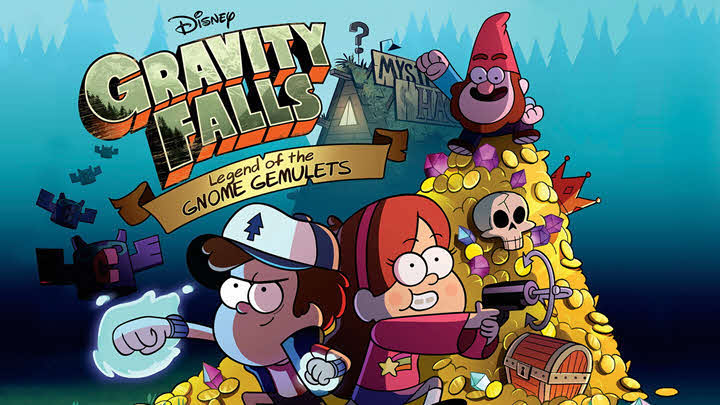 Gravity Falls is an animated series that will work as entertainment for children, but is designed to be enjoyed 100% by adults. Behind each chapter there is a mystery to be solved, and a spectacular tapestry will be woven, culminating in an amazing ending.

We experience mischief, summer love, and a harsh criticism of American society. Little by little we are introduced to the characters, and soon we discover that we cannot resist their charm. A multitude of locations populate the adventures of the two “twins”, taking them away from the safety of the cabin and into dark forests and dangerous caves.

This series is fun, mysterious; with funny yet multidimensional characters that has something in it for everyone. Check out our list of shows like Gravity Falls if you want more of the same type of comedy and genre in general:

The series follows the adventures of half-brothers Phineas Flynn and Ferb Fletcher, along with their friends, who live in a fictional town called Danville within the “Tri-State Area”.

Her older sister, Candace Flynn, becomes obsessed with two things throughout the series. The first is exposing her siblings, usually calling their mother to tell her what the kids are doing in an effort to get them into trouble.

She is usually never successful due to other events taking place, and she ends up looking foolish. The second is marrying her boyfriend Jeremy Johnson. She also has a pet platypus named Perry who turns out to be actually an undercover secret agent known simply as “Agent P”.

A very fun series with a lot of things to enjoy for both children and adults watching. Our #1 recommended pick when you want to watch more shows like Gravity Falls.

Solar Opposites is an animated sitcom that aims to provide quality entertainment to a more adult audience. The animation introduces us to a family of aliens who live in a suburb, and have constant discussions about whether life on Earth suits their needs.

They manage to escape before a meteorite destroys their planet and arrive in their spaceship on Earth, which they thought was uninhabited. Humans don’t seem to be very surprised by their presence. The teenage aliens must go to high school where they are bullied and rejected, but not so much because they are aliens but because they are different.

An animated comedy for adults that is extremely popular nowadays follows the adventures of a mad scientist and his not so intelligent grandson. Frenetic dialogues are ever present – ones that don’t even leave you time to breathe before you laugh at the next joke. Unimaginable characters like a cross between Hitler and Abraham Lincoln to find the perfect politician, worlds and more worlds each crazier than the last are common occurrence.

The adult animated series is in a strange limbo between the exaggeratedly real and the doubts about how many obscene jokes you can make before people think you’ve gone too far. Thus, it is a perfect follow up for fans of cartoons like Gravity Falls.

Finn is a human and Jake is a dog. They live in a fun post-human universe inhabited by interesting creatures, magical entities, animals, and a continuous gallery of bizarre characters.

Each chapter is, for the sake of redundancy, an adventure that leads them through unpredictable situations in which, generally, they have to solve a problem, defeat an evil being or help someone who is in trouble.

Based off the popular comics, this animation has all the ingredients to be a great alternative for anyone looking for more tv shows like Gravity Falls, with very similar comedy and characters.

This is an adventure story about sense of belonging, friendship, fantasy and a series of mysteries that will gradually be solved, which makes it quite similar to Gravity Falls.

A 14 year old teenager accidentally crosses a portal that takes her to a place known as “The Boiling Islands”. This place is inhabited by witches, demons, anthropomorphic beings, mythological beasts and other rarities. There you we meet the powerful and fugitive witch Eda also known as “The Lady Owl”, and her adorable but explosive and tyrannical companion King.

A very imaginative show with lots of comedy and interesting plot lines similar to Gravity Falls.