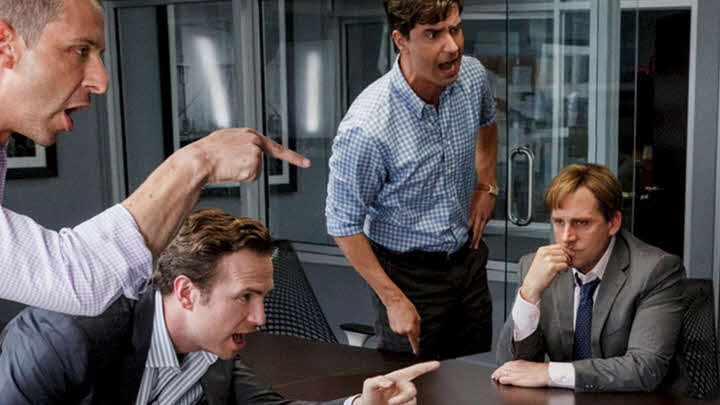 This film aims to show the absurd, hilarious and depressing truth about the global financial crisis of 2008 and the darker side of the banking system. It also shows how there were those who, in the face of the collapse of the big financial firms, sought to take advantage of the incipient economic chaos.

Based on real events, it tells the story of financial manager Michael Burry, who in 2005 studied thousands of individual loans. He found they were grouped into highly rated mortgage bonds and discovered that the financial products were loaded with delinquent mortgage loans that will go unpaid in the coming years.

Burry then invents a financial instrument that he calls “debt default insurance”, thus starting a bet against the banks. An Oscar winning movie with a stellar cast.

Discover more movies like The Big Short which also have financial related plots, with several also being inspired by real life events:

Movies Similar to The Big Short:

The wolf of Wall Street is set in 1987 and shows the career of Jordan Belfort. The novice stockbroker one day arrives on Wall Street with the sole idea of conquering the world from his workplace.

Coming from the middle class with dreams of greatness at the expense of anything, Belfort finds in a company that handles penny stocks the great opportunity to earn 40% commission, although the legality of this is in doubt.

He then forms his working group with whom he opens his own company which becomes famous and is persecuted by justice for large profits. Our #1 recommendation if you’re looking for movies Like The Big Short.

Also Recommend: Movies Like The Wolf Of Wall Street

Based on real events, this movie aims to tell the story of former vice president Dick Cheney. He began his career in the White House during the tenure of President Richard Nixon in the early 1970s. He then becomes the Vice President of the United States from 2001 to 2009.

Able to identify future opportunities and always hungry for power, Cheney managed to extend the tasks and responsibilities of his role to position himself as one of the most important and strategic figures behind President George W. Bush.

Great cast and an amazing performance by Christian Bale make this a solid movie.

Billy Beane faces a depressing situation: his modest team, the Oakland Athletics, has once again lost its best players to the big clubs – and their million-dollar contracts – and has to rebuild it with only a third of the budget.

Determined to win, Billy confronts the system by challenging the biggest players in the sport. He looks for options outside the world of baseball and comes up against Bill James’ innovative theories. That’s when he decides to hire Peter Brand, a Yale economist, smart and talented with numbers.

Together they confront the established theories of measuring activity in the game and reexamine them using computer statistical analysis, until then neglected by the baseball establishment. They invent a new way to discover players for their team, and turn its fortunes around.

A great story again based on real events that is a must see on our list of movies similar to The Big Short.

The story focuses on Jacob Moore (LaBoeuf), an ambitious young man who works on Wall Street. One day after having earned his first million, the unthinkable happens: the financial crisis of 2008 arrives. In a matter of days he loses his job, sees his mentor go bankrupt, and the company he works for goes bankrupt, so he seeks revenge on the man behind all these ills.

Moore has a relationship with Gordon Gecko’s daughter, who has not seen her father for years and resents him.

The protagonist is looking for his future father-in-law and will do everything possible to make father and daughter reconcile. With a story based around the economic crisis of 2008, this is a perfect film to watch after The Big Short.

The story revolves around Irving Rosenfeld, a con man from the Bronx who is involved in an ambitious FBI investigation, Operation Abscam, which was intended to break up a network of corruption involving major politicians.

The virtue of the film is precisely its closeness to the subject of entanglements, confusions, masquerades and deceptions. It seems that in the land of the stars and stripes, they feed on the scandal of others.

With a 5 star cast and based on real events, this movie is a must see if you’re hungry for more films like The Big Short.

More film recommendations if you enjoyed ‘The Big Short’: