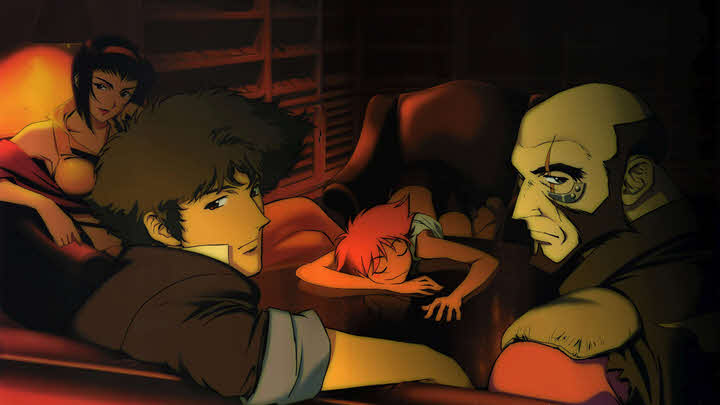 Cowboy Bebop is a story of cowboys in space. The main characters are a group of bounty hunters who earn their living by capturing outlaws and collecting their reward money by handing them over while they sail the skies with Bebop, their ship.

The crew includes Spike, Spiegel, the main hero of the story, Jet Black, a serious big man with a metal arm and owner of the Bebop. We also have Faye Valentine, the “hottie” of the group and the one who gives headaches to the rest, Ed, a super-intelligent hacker girl who is also a little crazy and generates a lot of comedy, and Ein a dog with a superior intelligence.

A futuristic show with a lot of great plot lines that navigates the universe and with it, different themes and story lines. Anime like Cowboy Bebop have similar themes, with some also set in space, while others in completely different times.

Black Lagoon begins with the kidnapping of Rokuro Okajima, then better known as Rock, an executive of a Japanese company. The purpose of the kidnapping is to obtain a disk containing information about illegal trade plans of the company for which Rock works.

The people in charge of the job are the Lagoon Company, a mercantile company that, basically, are mercenaries. Rock, who is unaware of the illegal business of the company he works for and its connections to the mafia, hopes to be rescued and that everything will be resolved. However, things will not be so easy.

Thus, betrayed and disenchanted with the system he was part of, Rock ends up joining the ranks of Lagoon Company. Despite having no skills in firearms or violent confrontations, his talent for diplomacy and the art of negotiation, as well as his knowledge of several languages, including English, Spanish and Russian, will make him a valuable member.

An amazing anime with a lot of great characters is our top choice for anime like Cowboy Bebop.

Gene Starwind and his young partner James Jim Hawking run a small business on the planet Sentinel III. They service anything from mechanical repairs to bodyguards to space shipments, as long as the law is not broken.

A woman named Hilda asks them to act as a bodyguard for her, and without knowing they are involved in finding a bio-droid. He will be vital to the operation of a mysterious ship that they will hijack, in order to reach one of the most enigmatic points in the universe: The Galactic Line.

A very Cowboy Bebop like feel to this anime which you should pick up immediately if you haven’t already.

The adventures of a space bounty hunter trio cruising the universe in search of exotic aliens to make money. The most remarkable thing of all is not the protagonists themselves but the varied situations that range from the emotional to the most absurd and hilarious.

This is a great watch for fans of anime similar to Cowboy Bebop where we enjoy similar characters and tones, but even more comedy which sometimes will keep you entertained for hours. A shorter series, but definitely a must watch.

Van is a wandering vagabond in a tuxedo looking for a man who obeys the outlandish description of “the man with the metallic claw”. He wants to get revenge on him for reasons we will soon discover. On one of his trips he is joined by a girl named Wendy who is looking for her brother, apparently kidnapped by the same man Van is chasing.

The synopsis is not very complicated and the same can be said of the plot, that it is expanded, grows in depth, importance and becomes more interesting as we move along in the story. The characters are the sea of interesting: they are much defined, they evolve and the relationships between them have a lot of memorable interactions.

In a certain part of Japan, three people cross their paths to embark on a journey.

Fuu, a girl of about 15, works in a tea house until one day a fight brokes out between two very strong ronin: Mugen and Jin. But they get into trouble with the bodyguards of the son of the lord of that village. Without being able to finish the fight, they end up being cornered and arrested to be executed the next day.

Luckily, Fuu manages to rescue them after several difficulties, but not in exchange for anything; they must help her find the “samurai who smells like sunflowers”. This might not at first glance look like anime like Cowboy Bebop, but the themes, characters and plot lines are quite in the same tone. This is why we can highly recommend this show as one you’ll enjoy quite a bit!