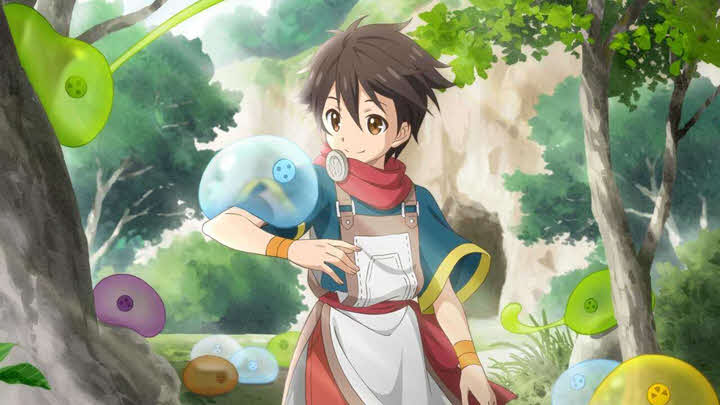 By the Grace of the Gods (Kami-tachi ni Hirowareta Otoko) follows Ryouma Takebayashi a lonely middle aged man with no recognition to his hard work. Upon death in sleep he is transported to three deities who taking pity on him gives another chance to live a fulfilling life. The deities bestowed him with amazing physical and magical skills and teleport him to a world filled with magic and promises to look after him.

He is now reincarnated as a child with affinity to all elemental magic which is very rare in that world and lives in a forest for three years. In that time he manages to collect, train and evolve different types of slimes. During his normal strolls in the forest he comes across a few members of Duke’s household and helps one of them who’s been critically injured. Upon knowing that the boy is living alone in the forest the Dukes family ask him to leave the forest and live with them.

Ryouma is all set to face many new members, learn and discover many types of skills and use the knowledge gained from his previous life to lead a happy life in this fantasy world. With a lot of Isekai around ‘By the Grace of the Gods’ focuses more on character development and drama rather than action like others Isekai. When looking for other anime similar to By the Grace of the Gods, we focused on lighthearted Isekai that are as calm, relaxing and engaging like this one.

Best Anime shows Similar to ‘By the Grace of the Gods’:

1. Ascendance of a Bookworm

Ascendance of a Bookworm (Honzuki no Gekokujou) follows Urano, an young Japanese women who is found of literature and dreams to just read all the books available. To fulfill her desire she joins as a librarian however dies in an accident. The last thought that crossed her mind before dying is to be able to read more at least in her next life.

She now wakes up as a frail five year old girl named Myne in a world with magic and very few books accessible to only Nobles. Frustrated by the lack of books to read around she decides to use her knowledge retained from her past life to make books on her own.

That Time I Got Reincarnated as a Slime (Tensei shitara Slime Datta Ken) follows Satoru Mikami, a middle aged salaried man living a monotonous lifestyle in Tokyo. When stabbed by a random assailant on street he hears a series of random commands echoing in his head before dying.

When he wakes up he discovers that he is reborn as a Slime now in a fantasy world. He soon discovers he has a powerful ability known as “PREDATOR” which allows him to devour anything anfg gain its powers and abilities. He starts devouring every thing he sees and gain new abilities and powers using this skill.

He stumbles upon Veldora, a powerful dragon sealed away for more than 300 years in that cave and befriends him. Veldora grant Satoru with divine protection and names him ‘Rimuru Tempest’. Free from the monotonous life in his previous world, Rimuru embarks on a journey that changes the his fate of himself and the people around him.

Both That Time I Got Reincarnated as a Slime and By the Grace of the Gods are lighthearted Isekai anime with the first one focusing a bit more on combat while the later on slice of life.

The anime follows Yuna, a fifteen year old student obsessed with her favorite VRMMO ignoring what’s happening in the real world. When a new update transports her to the game world and presents her with an overpowered bear costume, Yuna is not sure what to do as the costume looks cute but is too embarrassing to wear.

She must now start from level 1 but thanks to her costume and the skills that it provide she becomes too powerful to the monsters and adventurers around her. Just like By the Grace of the Gods, this anime too is a wholesome Isekai that focuses on friendships and helping others around with their unique powers.

The anime follows an middle aged lonely salaryman living in modern Japan, with no motivation in life. His life takes an unexpected turn when an accident kills him and he finds himself reincarnated as a five year old orphan in a new fantasy world. He is then saved by Merlin Walford, a once national hero who now lives in a secluded forest decides to raise him as his grandson and names him Shin Walford.

Merlin trains Shin in the ways of magic and combat but he soon realizes Shin’s lack of common sense and poor socializing skills due to him being away from other people. To overcome this Merlin joins Shin in the kingdom’s top Magic Academy.

Shin must now adapt to adjust to live in the new city, make new friends in the school and fight the bad guys in the process. If you are looking for an anime like By the Grace of the Gods with a bit more action, then Kenja no Mago is a must watch.

5. The Rising of the Shield Hero

The anime follows Naofumi Iwatani, one of the four cardinal heroes summoned from modern day Japan to save the Kingdom of Melromarc from the Waves of Catastrophe. The four heroes are bestowed with powerful weapons such as Sword, Spear, Bow and Shield. Naofumi, the shield hero gets belittled by others due to his weak offensive capabilities and poor personality.

When Naofumi gets falsely accused for sexual assault and gets robbed of all his resources, he becomes cynical, trains alone and works odd jobs to make the ends meet. He sets out on a journey along with Raphtalia, a demi human slave he bought to become stronger and better his reputation. Though a bit dark in comparison to By the Grace of the Gods, this anime has all the elements needed for a successful Isekai.