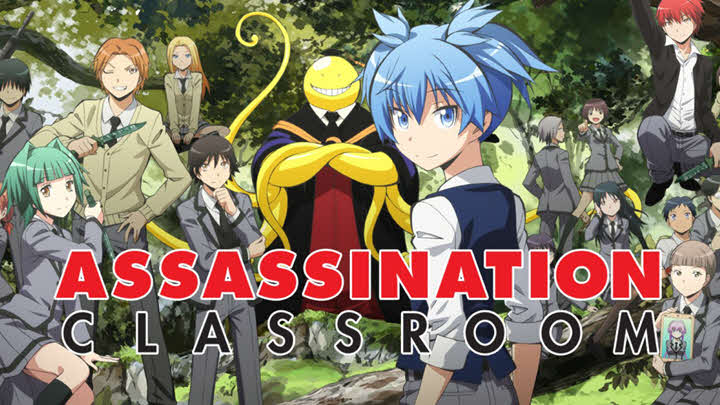 The plot in Assassination Classroom is about the attempted murder of class 3-E against Korosensei, a kind of strange octopus that keeps big secrets. Although this is the main theme, it is simply the basis on which various plots are developed, such as the social criticism of the 3-E class.

A very cruel educational system, as well as the world of the murderers, which we are told about on several occasions and in the development of some characters, the goal is to murder their teacher and receive a prize from the government. However, Koro-sensei is capable of moving at a speed of Mach 20, much faster than sound, and with his skills he will be an extremely difficult opponent.

An exciting anime with a super being as the main character, anime like Assassination Classroom will have similar main characters, and a lot of action. Discover our list below:

The story is set in the present time where 80% of the population has special powers that they call “gifts”, thus emerging heroes and villains.

Within that 20% is our protagonist Izuku Midoriya whose greatest wish is to become the number one hero like his idol, All Might.

Our protagonist agrees and begins to study at the U.A., one of the best schools to become a hero. Here he makes new friends, meets other professional heroes, learns to master his powers and even face real villains. A great anime like Assassination Classroom with very similar characters, and awesome action scenes.

Yuzuru Otonashi wakes up in the courtyard of a school, without any memory of how he arrived at that place or of his past life. Next to him, there is a student named Yuri Nakamura who tells him that he is dead and the place where they are is the “other world”.

Yuri will then ask Otonashi to join the group that he leads to face God and find the reason why they are in that kind of “purgatory”. He will also show him that all the students under his charge have an enemy in common, an angel named Kanade Tachibana who aims to make them find peace and eternal rest. An anime with a cool plot line, and very entertaining twists.

Saitama is a super hero, but not your average super hero. His power? He can kill anyone with just one single punch. While this might seem cool at first, to him it makes life quite boring.

Our hero has to find the motivation to get up in the morning and keep fighting monsters to save the world. But will he ever find one that can really challenge him?

Similar to Assassination Classroom this anime too has a parody angle on the superhero genre, but delivers cool action scenes and a very fun main character on his journey to save the world!

Katekyo Hitman Reborn! is about Sawada Tsunayoshi called loser Tsuna. He is a normal boy until his relative Timoteo informs him that he is going to be his successor.

To prepare Tsuna for the time when he will be the 10th Boss, he sends home a personal tutor named Reborn who teach him everything there is to know. Then more characters will appear that will make life more difficult and at the same time more fun for Tsuna and us the viewers.

A great anime similar to Assassination Classroom that will keep you entertained.

Each year, Hope’s Peak Elite Academy enrolls only the 14 most talented students. In addition, one is added at random. Makoto Naegi is that lucky person this time around. When he enters the class, the first thing he notices is that it is composed of bizarre and eccentric people, under the relentless rules of the principal, a robot Teddy bear named Monokuma.

The only way to graduate from Hope’s Peak is not only to murder another student but also not to be discovered, since every murder is analyzed by a court of law and if the guilty party is discovered, he is executed!

With plots where a student needs to kill someone else to succeed, this is an obvious anime like Assassination Classroom that you will enjoy.

More shows on Hulu, Netflix and Amazon Prime to watch if you liked ‘Assassination Classroom’: