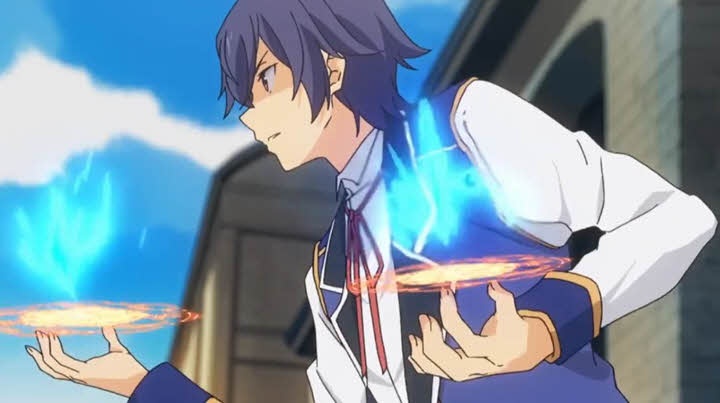 A young office worker without any motivation, does not wish to return home because no one is waiting for him. Suddenly, his life undergoes a radical turn due to a tragic accident. By unknown circumstances, the young man is reborn in the body of a kid in a world where magic exists.

Accepting his destiny, an old man decides to pick up and educate the child in the ways of magic. Soon, this child will manage to master a great deal of magical knowledge.

A very well made anime, where the main character is taken into another world. Check out more anime like Kenja no Mago (Wise Man’s Grandchild, Philosopher’s Grandson), where our main characters are usually transported into different worlds, with different rules.

1. That Time I Got Reincarnated as a Slime

Everything seems familiar at the start, as our protagonist dies, and wakes up in a new world. But from here, the anime starts to innovate. Our slime, which will soon get a new name, is an atypical protagonist in a world with interesting rules.

His strength lies in the fact that he has the unique ability to devour anything and assimilate it. In that sense, what is transcribed is a tremendous potential at the level of combat and knowledge. Our main character will explore all that, and more on his journey. A very strong choice if you want more anime similar to Wise Man’s Grandchild.

Also Recommend: 14 Anime Like That Time I Got Reincarnated as a Slime

This is the story of a programming genius, who after being run over by a truck is reborn in this medieval world as Ernie. As it could not be missing in a respectable Isekai, the reincarnation of the boy turned out to be a prodigy in everything he did. However he does have one weak point that will prove a bit troublesome – his short stature.

Due to the above, our protagonist sees his biggest dream truncated, which is to become a pilot of the Silhouette Knights. This is because he is not able to correctly reach the controls of the weapon. Our hero will have to use his programming skill to overcome his lack of height.

Also Recommend: 50 Anime Where The MC is OP But Hides it

3. In Another World with My Smartphone

Touya Mochizuki who is 15 years old, is accidentally killed by God with lightning. To compensate for his “little” mistake, God decides to send him to another fantasy world.

Besides offering him to live in another reality, God allows Touya to bring with him one thing from the real world. As a common teenager, he decides to take his smartphone.

God also gives Touya superior powers and abilities as part of the reward for his mistake, so that he can defend himself in this new reality. Over time, Touya evolves in this new universe, making friends (with whom he takes selfies) and resolving various conflicts. A very fun and innovative anime like Kenja no Mago that is very much worth your time!

Also Recommend: 14 Anime Like In Another World With My Smartphone

Satou is 29 years old and works as a programmer. He is suddenly thrown into another world where he quickly needs to adapt. He does this by gaining a high level and many treasures after using the magic of Meteor Rain, while defeating great evils.

He also meets three beast girls: two sisters (with beautiful purple and black hair), an eccentric blonde elf, and many more people during his trip. Although he occasionally fights demons and demon lords, in the end, this is a fun and exciting but also comforting fantasy story.

Shingo Ichinomiya is a 25-year-old man who works in a corporation. One day he falls asleep while thinking of what a busy day he’ll have tomorrow. To his big surprise, when he wakes up he is in the body of a 6 year old.

He begins to uncover the memories of this child and his current life. The eighth son of a poor but noble family and no money for inheritance.

Our hero discovers he is able to use magic, and has to learn to use these powers to become strong and able to fulfill his destiny. Another great story for you to enjoy if you like anime like Philosopher’s Grandson.

Also Recommend: 14 Anime Like The 8th Son? Are You Kidding Me?

More Anime shows to watch if you liked Kenja no Mago: