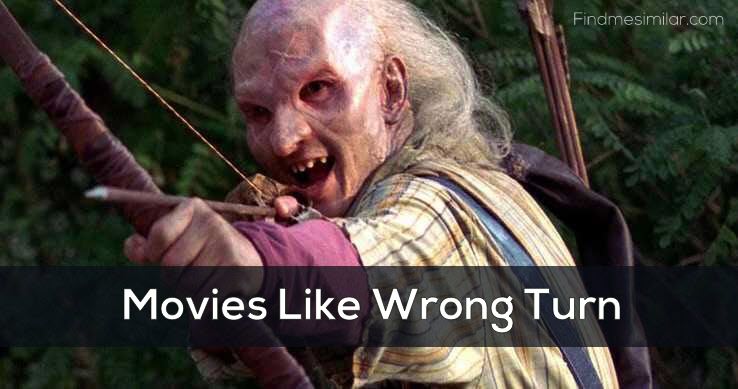 Chris Finn, a young doctor on his way to a work appointment finds the road blocked due to an accident in which dangerous chemicals were spilled. While looking for a phone, Chris finds a gas station where a map indicates a dirt road that will allow him to get to his destination on time.

Chris doesn’t know it, but by taking this road he puts his life in danger. The first scare takes him away when he crashes into a truck parked in the middle of the road. It is the vehicle of five young men who were in the woods on a hike and were forced to stop when a piece of barbed wire thrown on the road destroyed their tires. Is this a trap? Is someone playing a dangerous game?

Discover more scary movies like Wrong Turn where the characters face difficult circumstances after taking a wrong turn and have to overcome mysteries and pure evil to survive.

Kristy, Ben and Liz are three young hikers who go into Wolf Creek National Park in Australia. The trouble starts when their car won’t start. While looking for help, they run into Mick Taylor, a nice local resident who promises to repair their car.

The young people agree to accompany him to his camp, not knowing that their journey will become deadly. The trip turns out to be a nightmare when, once there, the man turns out to be a sadistic murderer who plans to torture them to death.

A very scary thriller that is perfect for fans of Wrong Turn, both in action, suspense and jump scares.

A road trip to one of the biggest college soccer games of the year takes a dramatic turn for Carly, Paige and their friends when they decide to camp overnight before heading to the game. A confrontation with a mysterious trucker at the campsite leaves everyone restless.

When she wakes up the next morning, they realize that her car may have been forced deliberately. At the risk of being stranded, they accept an invitation from a local neighbor to take them to Ambrose, the only town for several kilometers.

Once there, they are drawn to Ambrose’s main attraction – Trudy’s Wax House, which is filled with incredibly realistic wax sculptures. But, as they soon discover, there’s an eerie reason why the pieces look so real. A great cast and similar to Wrong Turn, this too turns out to be quite the wrong turn for our heroes.

A late night detour leads to an unimaginable nightmare when a couple’s car breaks down on a remote road. Finding themselves stranded on a dark and deserted two-lane highway, David Fox and his next ex-wife Amy are forced to spend the night in a seedy motel run by a strange but seemingly harmless owner.

As this is a list for films like Wrong Turn, this movie also features a wrong turn for our main characters, one that they will have to try and get out alive.

Cabin Fever places the viewer in a fairly typical location for teenage horror films. A group of young people make a weekend getaway to a cabin in the middle of a forest, and once there, things get out of hand.

In this case there is no killer to kill them in various and intelligent ways: here, the monster is a virus (a particularly bloody and nasty one, but a virus after all). Cabin Fever is a very entertaining film, with a lot of strength and a lot of very powerful scenes, made by a great lover of horror films (and that shows).

It doesn’t complicate existence, it doesn’t seek anything else than to entertain, but that makes it VERY good.

The story follows a group of very stereotypical friends like the nerd, the pretty one, the virgin, the tough guy and the drug addict, on a weekend in a small cabin in the middle of the forest where they start being chased by some monster or paranormal entity that they themselves will choose without realizing it.

All of this is orchestrated by an organization that is dedicated to killing people in very strange ways for scientific purposes.

This can be a satire or a tribute, it can even be a study of horror stories because you may or may not be a fan of the genre, this movie can be very entertaining and a great watch for fans of movies like Wrong Turn.

More films to watch if you liked Wrong Turn (Series):