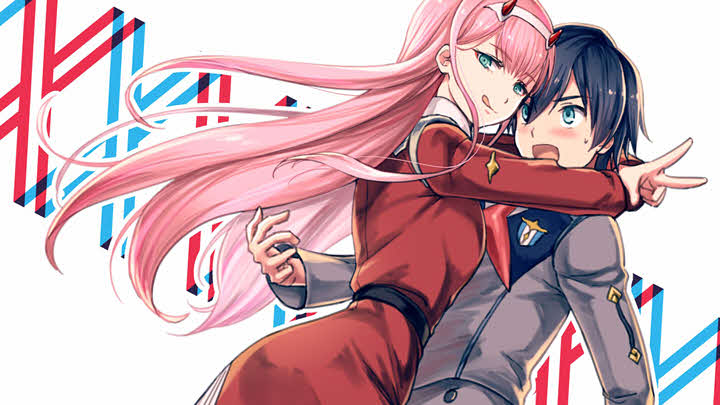 In a dystopian future, humanity is forced to live in cities within domes called plantations, this is because the land is no longer fertile. These cities are constantly besieged by beings called Klaxosaurs, with the Plantations being protected by giant robots called Franxx, which are piloted by children.

The main characters of the series are the boys who are part of the 13th Squadron. The story will revolve around them, but the real protagonist is Hiro, a shy boy who can’t connect with his partner to pilot the Franxx (these robots must be piloted by two people, a boy and a girl).

One day he comes across a girl with pink hair and horns on her head, who is a pilot who has a bad reputation: no pilot survives after getting on the robot 3 times with her. Check out more fun action packed anime like Darling in the Franxx where we also have young protagonists, a dystopian future, saving humanity, great action scenes and a little romance:

Best Anime Shows Similar to Darling in the Franxx:

In this dystopian future, humanity is forced to live in underground colonies without contact with the surface. In one of these colonies live Kamina and Simon: Kamina is a crazy dreamer who lives thinking that something is waiting beyond the surface, while Simon is a shy boy who only does his own thing.

One day a girl with few clothes and a robot fall into this abyss, our protagonists help the girl (Yoko) to defeat him (with the help of a small robot that Simon finds). The three of them will embark on an adventure full of dangers in order to free humanity. Our top recommendation if you’re looking for similar anime like Darling in the Franxx.

The story of Evangelion begins when the third angel begins to attack the city of Tokyo-3. Here we meet a young Shinji Ikari who, at his father’s request, goes to the NERV base of operations. NERV is a secret organization founded by the UN that will be in charge of fighting the angels and protecting humanity.

These angels are giant beings that attack humanity and can only be defeated by the Eva, a series of giant robots built to deal with the angelic threat. These robots have the peculiarity that they can only be piloted by teenagers and the feelings of the pilots deeply impact their ability to navigate these robots.

You can already notice the similarities yourself, so this is obviously a very similar to Darling in the Franxx that is sure to keep you on the edge of your seat.

The story begins with the school life of Renton Thurston, the son of legendary hero Adroc Thurston. His grandfather and legal guardian wants him to become a mechanic of his stature and lead a happy and peaceful life, without the complicated circumstances surrounding his father’s death or his sister’s disappearance.

But the boy, partly because of the irresponsibility inherent in his age, is not content with so little; he wants to go to uncharted territory. This will lead him to get involved in Gekkostate, a dangerous gang made up of little less than terrorists in the eyes of the government.

Or to put it another way, in this particular case, people who are willing to break the law for a greater good: the good of humanity, of the planet and of everything that inhabits it.

The plot introduces us to Ryuko Matoi who arrives at the academia Honnonji to look for the murderer of her father, the only clue she has being a scissor-shaped sword.

At the academy she will have to fight against other students who wear special combat uniforms (goku uniforms), who obey the president of the student council Satsuki Kiryuin. Ryuko will get her own uniform to fight fire with fire.

A cool action packed anime with a simple plot that delivers hours of good entertainment for fans of Darling in the Franxx.

The story of Guilty Crown begins in the year 2029 when an alien virus called Apocalypse spreads and plunges Japan into a state of chaos known as Lost Christmas. Due to this tragedy an international organization known as GHQ intervenes and restores order in Japan at the expense of its independence.

Ten years later, in the year 2039, Shu Ouma a 17 year old high school boy, meets Inori Yuzuriha, the vocalist of the popular group Egoist. At this meeting, Shu discovers that Inori is a member of the Undertakers, a resistance group that aims to free Japan from GHQ. It is there that Shu begins to take part in the actions of the Undertakers and obtains, accidentally, The King’s Power.

This is a kind of mark that allows him to turn people’s hearts into weapons called Voids and use them at will. Another perfect watch for someone who wishes to enjoy more anime similar to Darling in the Franxx, this has it all: action, romance, mystery and comedy.

More anime shows to watch if you liked Darling in the Franxx: