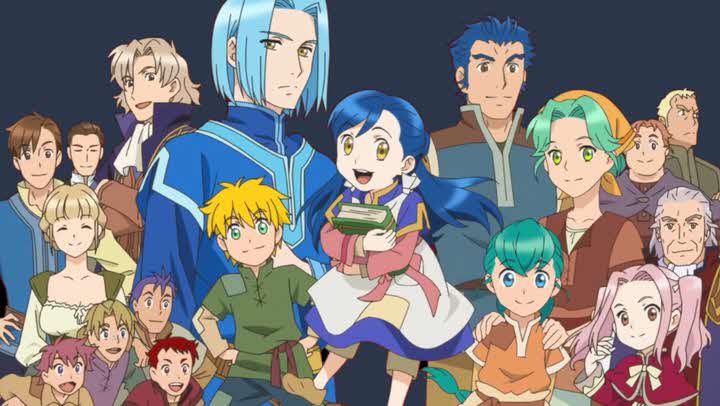 Honzuki no Gekokujou is an Isekai anime set in a fantasy world whose protagonist Urano Motosu, is a university librarian and is deeply in love with all kinds of books. one day she dies when a mountain of books fell on her, and is reborn in another world in the body of a sickly girl named Myne.

She soon discovers that in that place the existence of books is limited to only the most noble of people. She will do anything to get one or make her own but… will she be able to do it before she dies?

Check out more smart and fun anime like Ascendance of a Bookworm where the characters are either taken to a new world, or live a different life, a new life because of a similar development.

Best Anime Shows Similar to Ascendance of a Bookworm:

Dr. Stone is an anime of the Shonen genre, post-apocalyptic and comedy that has as its protagonist Senku, a young man who stands out for his extraordinary intelligence and his friend, Taiju, who enjoys great strength.

They are petrified by a blinding light along with all humanity but 3700 years later, Senku “wakes up” and discovers that the world as he knew it has fallen apart. It is now up to him to return everyone to normal using science, but does he have enough time?

This fun and witty anime is perfect for fans of Ascendance of a Bookworm who want something different that hits similar notes.

2. My Next Life as a Villainess

Catarina Claes is the young heiress of a rich family who one day receives a blow to the head with a stone and recovers the memories of her past life. It turns out that the world she lives in is not real, or so she thinks, since it is the world of Fortune Lover, an otome game she was obsessed with in her previous life… but her role is that of the villain who tries to spoil all the romances for the protagonist!

The best possible ending the game offers Catarina is exile, and the worst is death! She will have to find a way to avoid all the situations that lead to her death and try to create a happy future for herself.

Another great anime like Ascendance of a Bookworm where the character lives a different life in a different setting.

3. Restaurant to Another World

The Nekoya restaurant at first sight looks like a simple place to get some food, however every Saturday it closes its doors to its normal customers to attend special guests.

This is because its entrance door in these days is connected to mysterious doors to other worlds, so different beings like wizards, elves, fairies, dragons, mermaids among many others come to consume the different dishes on the menu in what for them is the exotic restaurant in another world.

With a wide range of characters and many interesting twists, this anime is both original and fun.

Shinichi Kano is a young reclusive otaku who is offered a job thanks to his great knowledge of anime, manga and video games. Right after meeting his boss he is kidnapped and wakes up in a parallel world with a fantastic theme.

Shinichi is informed that he was selected by the Japanese government to help improve his country’s relations in this new world, establishing a company to promote the unique products of Japanese culture in this unexplored market.

Once again we have the theme of waking up in another world, and Outbreak Company does a very good job of navigating through it through the eyes of our main character.

In Spice and Wolf, the story revolves around 25-year-old Craft Lawrence, a traveling merchant who travels from town to town selling and buying various things to make a living in a historic setting with European influences.

His main goal in life is to raise enough money to start his own store, he has been traveling for seven years already, while gaining experience in the trade. One night when he stops in the city of Pasroe, he finds in his car a girl named Horo, a wolf deity, more than 600 years old. She appears to be fifteen years old, with the exception of having a tail and ears like a wolf.

She negotiates her way out of the village by making a deal with Lawrence to take her with him. As they travel together, their wisdom helps to increase their profits, but at the same time, their true nature must be hidden so as not to attract the attention of the church.

A little different in setting, this awesome anime will be very enjoyable to fans of Ascendance of a Bookworm because of the characters’ wit, and the way the story progresses.

More Anime shows to watch if you liked ‘Ascendance of a Bookworm’:

6. The Saint’s Magic Power is Omnipotent
7. Mushoku Tensei: Jobless Reincarnation
8. By the Grace of the Gods (Kamitachi ni Hirowareta Otoko)
9. Knight’s & Magic
10. Snow White With Red Hair
11. That Time I Got Reincarnated as a Slime
12. Kemono no Souja Erin
13. Somali and the Forest Spirit