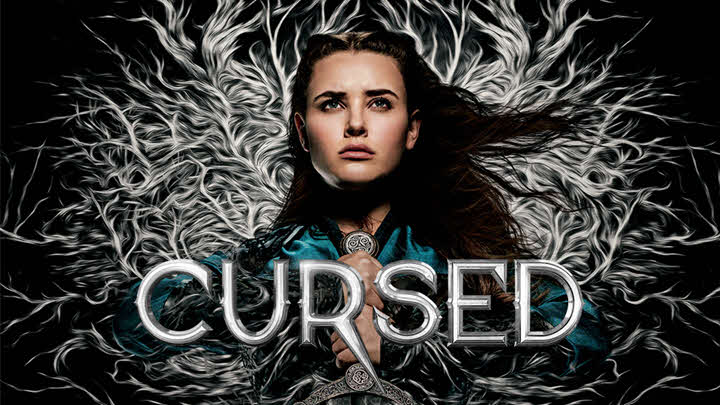 The story of Cursed is set in the world of the legend of King Arthur and follows the character of Nimue, better known in literature as the Lady of the Lake, a kind of fairy who appears in some works as a mortal being who learns the art of magic from Merlin, while in others she is shown as an inherently magical creature.

After her mother’s death, the teenager finds a partner and friend in Arthur, a young mercenary who is looking for Merlin to deliver him an ancient sword.

A show that combines history with legend and magic, shows like Cursed are similar in that they also dramatize and fictionalize actual history and sometimes also include magic.

The plot based on the Arthurian legend focuses on the moment when the young wizard Merlin is about to enter adulthood and meets the future King Arthur Pendragon, at an age similar to his, both being of the same generation. Set in Camelot, it takes the action back to the moment before the story of King Arthur is known to all.

If you enjoy shows like Cursed, then Merlin is the obvious show for you as it focuses on this magical character that is also very important in Cursed. You could even see it as a prequel of sorts to Cursed, so it is easily the #1 on the list.

Camelot’ picks up the story just as King Uther suddenly dies and Britain falls into inevitable chaos. The sorcerer Merlin names Arthur king, the not-so-well-known son and heir of Uther who was raised as a commoner. But his half-sister has other plans. An inexperienced young Arthur will face difficult times and be tested beyond imagination.

Arthur will have to rely on Merlin to shoulder the new responsibilities of being king: he must fight against a kingdom full of deceit and divided by war. The decisions that young King Arthur will make will be crucial to saving his kingdom and the hope of a more just life.

Once again, if you loved Cursed and are looking for more shows like Cursed, another story about Merlin and Camelot is the obvious choice.

Geralt de Rivia is the sorcerer, the White Wolf, the famous monster-killing mutant of the continent. Feared and hated alike, the sorcerer travels through a brutally hostile world trying to make a living doing what he is best at. What he was trained to do in the ancient fortress of Kaer Morhen: to kill as many nightmarish creatures as possible in exchange for a few coins.

Everything will begin to change when he is linked to Ciri, a girl with an unusual power… A show very similar in tone to Cursed, extremely well made, with great visuals and a stellar cast.

Ava is a quadriplegic teenager who has lived most of her years in an orphanage. After dying in mysterious circumstances, Ava is brought back to life when a divine artifact is embedded in her back and she chooses to be its new bearer and become the leader of the Order of the Cruciform Sword, a secret organization of nuns who fight demons on earth.

However, Ava has never been a believer and refuses to accept her duty, for now that she has recovered all the functions of her body, she prefers to live her second chance at life in freedom. Good action, a main character very similar to the main character in Cursed, a show which you’ll enjoy.

Mary of Scotland, arrives at the French court at the age of 15 to get engaged to Prince Francis, and thus seal an alliance between the two countries to be able to fight England, which threatens to invade Scotland.

Here the interests of King Henry II, pressure from the French nobility and political pretensions of other countries and of course those of the Vatican are intermingled. The threats of danger and war are constant and have to be dealt with.

With strong ties to real history, this show doesn’t have a magical fantasy aspect to it but it is still a very worthy watch if you’re still craving more shows like Cursed.

More TV, Netflix and Amazon Prime shows to watch if you liked ‘Cursed’: