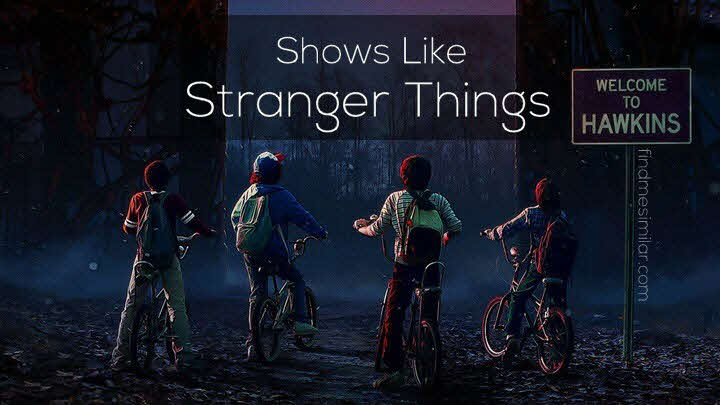 Dungeons and Dragons, school dances, Soviet paranoia, hormonal teenagers. Stranger Things, takes place in a town as American as the apple pie. On the surface, it brings together the ingredients of the American dream in the 1980s: a safe, stable community where people greet each other when they cross paths, children ride their bikes down the greenish avenues, and the word violence barely comes up in literature and history classes.

But the peaceful life of Hawkins, Indiana, is about to change. A supernatural science experiment has unleashed a strange creature that, in a few days, will turn the quiet daily life of a handful of residents into a dark nightmare.

In this new and tricky environment, some misfit children who take refuge in their imagination to get around their tortuous school life, some teenagers who feel trapped in the desperate monotony and some adults tormented by their memories will have to deal with the creature and its extraterrestrial implications.

This awesome show with a nice retro feel deals with the supernatural but also with themes of friendship and love. Shows like Stranger Things are shows about supernatural happenings that are hard to explain, and where different groups of individuals have to deal with them.

The series begins with a mobile phone recording in which we see a young blonde girl throw herself off a bridge. This is Praire Johnson, a young woman who had disappeared seven years earlier without a trace and who, once hospitalized, is found by her adoptive parents.

They discover to their surprise that she has regained her sight, inexplicably and that she is very different to the girl they remember. At the time of her disappearance she was completely blind and it is unknown what her whereabouts were or how she managed to see again.

What follows is a series of mysteries about what happened to her, who she really is, or better yet, “what” she really is. The show has in many ways a very similar tone to Stranger Things, but it is also different in others. All in all, if you are looking for shows like Stranger Things, this is the place to start.

Dark begins with a cryptic discourse about time and inevitability. We also have a quote from Albert Einstein about the non-linearity of time and our cultural misconception of simultaneity.

We see pictures of people at different stages of their lives and a bunker full of weapons and apocalyptic preparation. With all this, we understand that this series will go on a reflective path, will talk about time travel and will have some dystopian element. And these are just the first 5 minutes.

What follows is a story surrounded by mystery that will keep you hooked from beginning to end. So if shows like Stranger Things is what you are looking for, do not skip this one.

Federal Agent Ethan Burke is heading to Wayward Pines in search of two of his missing colleagues, when the car he is traveling in with a partner goes off the road.

A few hours later Ethan wakes up in the middle of a charming town, a town where birds are singing and children are running around. He doesn’t know where he is or how to get out of there.

With no papers or money, Burke must unlock the secrets of this idyllic community where nothing is what it seems. Welcome to Wayward Pines, a place you may never be able to leave!

The question “Who killed Laura Palmer” kept a large group of television addicts guessing for almost a year in the early 1990s.

Highly aromatic firs, majestic waterfalls, diners with jukeboxes, pin-up style women and even a glamorous, clandestine whorehouse, drew the radiant facade of Twin Peaks. But, there was also a dark side. A ghostly forest that surrounded a town where its inhabitants were fervent believers in the power of natural forces to combat the invisible evil presences that plagued them.

What happens when we get too addicted and too dependent on technology? This is exactly the question Black Mirror looks to answer.

A dark future for humanity because of technology, or rather, because of the use that is given to it? Random scenarios are proposed in each chapter, analyzing the human condition and the repercussions the high use of technology might have on us in the future.

This is a show that really makes you think, but it is an important one, to keep us grounded and remember not to become too addicted to technology. A great watch if you love shows similar to Stranger Things.