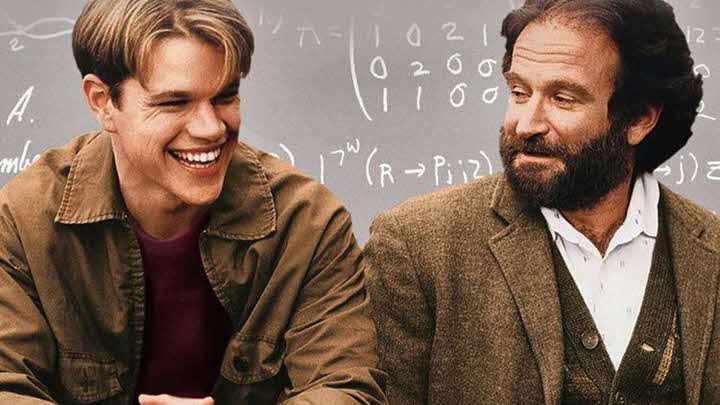 Twenty-year-old Will Hunting, struggles between his brilliant intellect capable of solving any mathematical problem and his bad behavior on the streets of Boston, which causes him, time and again, problems with justice.

It is for one of those crimes that Will was about to go to jail, but a professor at MIT proposes a deal to the jury and ends up taking care of the boy, who is forced to commit to two specific tasks: study mathematics under his tutorship and assist a psychologist to help him eliminate criminal actions from his life.

Great cast, written by Matt Damon and Ben Affleck and starring Robin Williams in the role that won him his only Oscar. Movies like Good Will Hunting are also about geniuses, people with flaws but a lot of redeeming qualities that have to grow and evolve into better versions of themselves.

The story begins in 1959 with the welcoming ceremony of the new school year at Welton Academy, when literature teacher John Keating, an alumnus of the school, is introduced. The motto of the private school, declared at the ceremony, is: “tradition, honor, discipline and excellence”.

Breaking with tradition, in his first class, Professor Keating takes the youngsters to the classroom that holds the memories of the school’s history. As they gaze at the photographs of their predecessors, Keating whispers, “Carpe Diem,” which means “Seize the day. Thus, he begins an educational journey that aims to inspire children.

Again starring Robin Williams, this movie has a similar tone which makes it our top recommendation for people looking for movies like Good Will Hunting.

John Nash is a professor played by Russell Crowe, who started as a student at Princeton in 1947.  He stands out as a great mathematician, with the extraordinary ability to detect patterns in nature and in various areas.

For him, mathematics became a fundamental symbol in his life. As he is always testing formulas and theories,  he did not have much time to make friends.

While also suffering from schizophrenia he creates a roommate who helps him with his problems and shares things with him, becoming a great support for Nash in his difficult moments. But very soon, Nash will have problems in realizing what is real and what isn’t. And so will the viewer.

Accused of the murder of his wife, Andrew Dufresne – after being sentenced to life imprisonment – is sent to Shawshank prison. Over the years he will gain the trust of the prison director and the respect of his fellow prisoners, especially Red (Morgan Freeman), the head of the bribery mafia.

This is a story about character development, regret, redemption and second chances. It is one of the most popular movies of all time, and one of the best acted. Andy Dufresne is smart, cunning and determined to achieve his goals, and his journey is one that you won’t really ever forget.

If you like movies similar to Good Will Hunting, this is an obvious must watch as well.

Jamal Wallace is a smart and impetuous young man of 16, a good student and an African-American athlete who excels at basketball.

He comes from a humble family, but his true vocation, despite his love of sports, is to write. He has a notebook where he narrates his thoughts, his reflections. A notebook that he keeps hidden.

A chance encounter makes a Pulitzer prize winning author to find his notebook and discover the kid’s talent. From that moment on, a master-disciple relationship begins between the two. A great story, well acted, well worthy of a watch if you’re into movies like Good Will Hunting.

Fred Tate is a gifted seven-year-old boy entering a specialized institute in an advanced university course. He is capable of all kinds of activities, is a genius in mathematics and music and therefore feels isolated in front of a world of ignorant and less intelligent classmates, and does not enjoy his childhood either.

He feels lonely and, sometimes, a rare specimen. His mother also does not know how to act with such a particular child. But the little one’s luck changes when an expert in the education of this type of child appears.

Very similar tones here and another great watch if you want to see more movies like Good Will Hunting.

More film recommendations if you enjoyed Good Will Hunting: