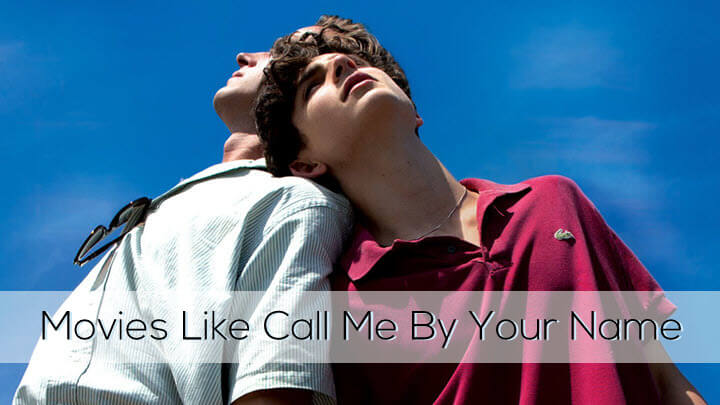 The story told in Call me by your name takes place in Italy in the 1980s and stars Elio, a 17-year-old whose father, a prestigious academic researcher, receives Oliver during the holiday season to help him with his academic articles.

Oliver is much older than Elio, but what happens between them, which goes from initial rejection to friendship, desire, sexual attraction and complicity, gives rise to one of the most powerful and eloquent discourses on love.

This movie tackles a very important subject, and the movies like Call me by your name we recommended here are similar in topic and message.

Best Movies Similar to Call Me by Your Name:

This generational masterpiece tells the story of two cowboys who meet in the summer of 1963 and feel a mutual attraction to one another. This union, full of complications, joys and tragedy, proves the strength and power of love in the face of aversion.

At the end of the summer, they have no choice but to go down the mountain and separate. They get married to women and try to live “normal” lives, only to continue seeing each other over the years. Will living a lie work, will people accept who they really are?

These are tough questions that will be answered, and that will make the viewer think about prejudice and injustice. In the list of top movies like Call Me By Your Name, Brokeback Mountain is easily our top choice.

Three pieces that capture Chiron’s life, from his childhood to adulthood. Moonlight tells the story of a boy who has everything he needs to become a monster around him.

We share a journey of vital search, of flight forward, of reflection about what we really keep inside despite appearances. Jenkins manages to find poetry in decadence, among drug trafficking, among violence and bullying.

This story shows how in spite of your circumstances, with a little help and direction, you can rise above it. Very appropriate if you like Call Me By Your Name.

When Omar’s uncle, a young man of Pakistani origin who now lives in London, decides to stop working in the family laundry, the young man will take over and start running it. He will be assisted by Johny (Daniel Day-Lewis), a former classmate.

He will soon discover that Johnny has become a juvenile delinquent, a hooligan with no aspirations in life. This, however, will allow her to get close to him and help him, and an open and intimate relationship will develop between the two of them, and they will end up becoming lovers.

The relationship will not be well accepted by either families, and will shock all those who cross paths in their lives.

In this movie we will go into the story of Clementine, a 15 year old teenager who, like many young people her age, is looking for her place in the world, but everything becomes complicated when she realizes that her sexual identity does not correspond to what she would “normally” expect.

One day, when she happens to run into a blue-haired girl on the street, her whole life is shaken up and changed. Full of prejudices and complexes, she clings to the idea that falling in love with another woman is wrong, but her desire to be happy and to love that girl takes precedence over everything others believe in.

New York, Christmas 1952. Carol is a married, wealthy, upper class woman with a four year old daughter who is elegant and sophisticated.

Therese is a young woman who works as a shop assistant in a department store, who doubts about what to do with her future, with her boyfriend, with her job, with her whole life, in short. What is common between them? Nothing, but destiny crosses their paths to upset or turn upside down the desires and hopes of both of them, as well as those around them.

They form a bond that is stronger than just friendship, and have to deal with the consequences. A great story that will make you think, which makes it perfect if you want more movies like Call me by your name.

Films you may like if you enjoyed ‘Call Me By Your Name’: