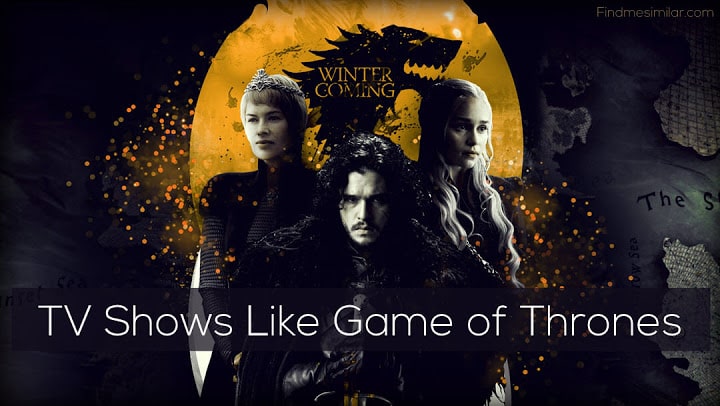 In a land where summer lasts for decades, and winter for a lifetime, conflict awaits at every corner.

From the Machiavellian south and the wild lands from the east to the frozen north and the ancient wall that protects the kingdom from darkness, two powerful families are caught in a deadly game of cat and mouse, the purpose of which is absolute control over the Seven Kingdoms of Westeros.

While betrayal, carnal lust, intrigue, and supernatural forces shake the four corners of the kingdoms, the bloody battle for the Iron Throne will have unforeseen consequences. You will be taken on a journey filled with twists, with drama, with betrayal, with dragons, undead creatures, and fascinating characters.

TV Shows like Game Of Thrones need to have a similar medieval feel, with politics, wars for power, intrigue and betrayal as recurring themes.

Vikings follows the adventures of Ragnar Lothbrok, the greatest northern hero of his time. The series presents the life and actions of the Viking gang, but also of Ragnar’s family and his journey to the throne of the Viking tribes.

In addition to being a fearless fighter, Ragnar embraces traditions and devotion to the gods, legend has it that he was a direct descendant of Odin, the god of war and warriors. Ragnar is ambitious, wants to invade new lands and eventually sails to England, where new adventures, twists and drama unfolds. Ragnar meets and spares a Christian Monk, who could lead to Ragnar confronting his entire belief system.

When wanting to watch TV shows like Game of Thrones, Vikings is a natural transition. The setting looks similar, and even though this is based in history, the same politics, betrayal, ambition and drama motives are abundantly present.

The Last Kingdom reveals a turning point in the history of England. King Alfred fought against the pagan occupants, who had occupied the English territories for some time. Only the kingdom of Wessex could offer any resistance to the Northern occupants. We are presented with a struggle both at the strategic and ideological level, as well as at the religious level. The culture of Christian England collides with that of pagan Denmark.

All the action of this series is closely related to the character of Utred, who as a small child had become a prisoner of the Danes. But even though the character grew up in the opposing camp, he always felt that Saxon blood flowed into his veins. The young man was educated as a true Viking, but now he has to choose which side he will be on. Which side will he fight for?

This show is great both for Game of Thrones fans and fans of the series Vikings. Definitely worth watching after you’ve watched the first two!

Spartacus is a broad overview of the life of the most famous Roman gladiator – all in a bloody, visceral note.

After being separated from the love of his life, Spartacus is forced to participate in fights in the arena with warriors and beasts. Any violent death is a dose of fun constantly sought after by the entertainment lovers of those times. Spartacus, however, struggles for survival, not for fun.

He has to enter dirty political games and make friends with enemies in that world controlled by corruption, violence, sex and reputation. He himself will feel the seductive force of power and will be tormented by the need for revenge. A great high quality TV show like Game Of Thrones.

Jonathan Rhys Meyers plays Henry VIII, as he has never been presented: attractive, passionate, “the most sensual Henry VIII of all time”.

With a great desire for power and thirst for love, the young and brave monarch governs his kingdom with a cruel neglect. History is rewritten by Michael Hirst. This drama represents the splendid rebirth of the dynasty of the Tudors under the leadership of King Henry VIII.

Here we will find the unfailing historical truth, without inhibitions, of the counter-king Henric Tudor VIII, known for his numerous marriages and short duration, the wives being either sentenced to death or banished from the royal court.

It is the year 52 I.C. For four hundred years since the Republic was founded, Rome has been the richest city in the world, a cosmopolitan metropolis populated by one million people, the epicenter of an expanding empire.

The Republic was founded on the principle of common power and never allowed a single person to have absolute control. But these principles are strongly shaken and corrupted by excesses and corruption. The leadership class became overly rich, and the old Spartan values of discipline and social unity were forgotten. There is a huge difference between social classes.

The political and legal systems prove to be full of cracks, and the power is almost exclusively the army. A drama that abounds with the intensity of love and betrayal, describing the relationships between slaves and masters, husbands and wives.

More TV, Netflix and Amazon Prime shows to watch if you like Game of Thrones: