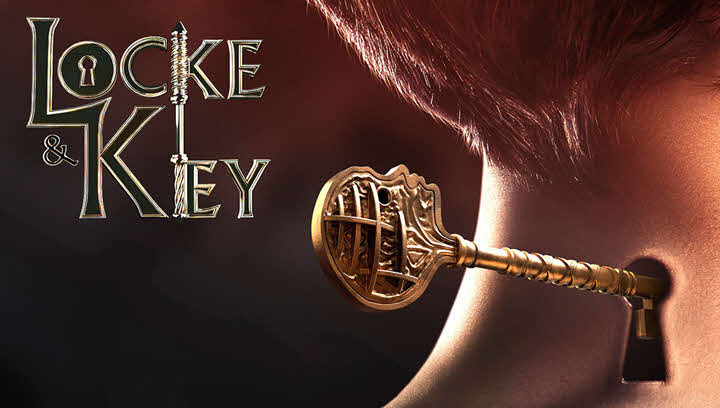 Locke and Key is based on a graphic novel of the same name written by Joe Hill and illustrated by Gabriel Rodriguez. The series centers on the three Locke siblings Tyler, Kinsey and Bode and their mother Nina who moved into their ancestral home of Keyhouse after the families patriarch Rendell is murdered.

The siblings soon discover that their new house is full of magical keys each with a unique powers and they are some how related to the death of their father. When a mysterious demon threatens the Locke family they must now collect all the Keys to save their family and solve the mystery of their father’s death.

It took nearly 10 years to bring the live action version, however Netflix has made the series a little less creepy and graphic compared to the book and made it a bit more as whimsical show. Looks like Netflix was trying to pitch the series to a larger audience making it family-friendly show by decreasing the adult content and a lot of bloodshed.

The series have terrific set pieces, aesthetics and performances from the lead crew. The first season has 10 episodes of whimsical adventure for us to binge. This series amazingly blends both fantasy and real world drama and if you are looking for more such magical shows like Locke and Key then this list of recommendation are for you.

Based on a horror comic series by Steve Niles and Damien Worm, October Faction follows a monster-hunting couple Fred and Deloris Allen who constantly travelling around the world and killing the monsters.

When they learn about the death of Fred’s father they return to their ancestral home with their teenage twins Geoff and Viv. Not as dark as the comic series the Netflix series focuses mostly on the family drama and teen angst rather than the supernatural side.

With each episode we learn more and more about the dark secrets of the Allen Family and this is a must watch if you are looking for a show similar to Locke and Key.

Based on “Sabrina: The Teenage Witch” which is an dark coming-of-age story, Chilling Adventures of Sabrina follows Sabrina Spellman who is a half-witch and half-mortal.

Ragnarok is an Netflix series that follows teenager Magne who along with his mother and brother recently moved to Edda a small Norwegian town. This town is headed for Ragnarok as it is plagued by pollution and climate change caused by the Jutul families factories.

Jutul’s are actually frost giants and giantesses disguised as normal humans and Magne learns he is an embodiment of Thor he decides to fight against Jutul family and save the planet. This show combines supernatural elements, environmental issues and Norse mythology making it a worthy binge.

Stranger Things is an Netflix original horror drama series created by the Duffer Brothers. Set in 1980’s Stranger Things tells a story of an young boy named Will Byers who disappears during supernatural events occurring around the town.

His mother, a police chief and a groups of friends starts investigating his disappearance and uncovers a mystery involving secret government experiments and frightening supernatural forces.

Dark is a German Netflix original Sci-Fi thriller series. It tells the story of a small town in Germany called Winden where children start disappearing.

When four estranged families set out on search for missing kids they unearth the sinful past, mind-bending mystery and hidden connections between the missing children with the town history and its citizens that spans across three generations.

More TV and Web Series recommendations if you like Locke and Key:

6. The Stranger
7. The Umbrella Academy
8. A Series of Unfortunate Events
9. The Shannara Chronicles
10. Shadowhunters: The Mortal Instruments
11. The Order
12. Lucifer
13. Mindhunter
14. Lost in Space
15. The Haunting of Hill House
16. Outcast
17. American Gods
18. His Dark Materials