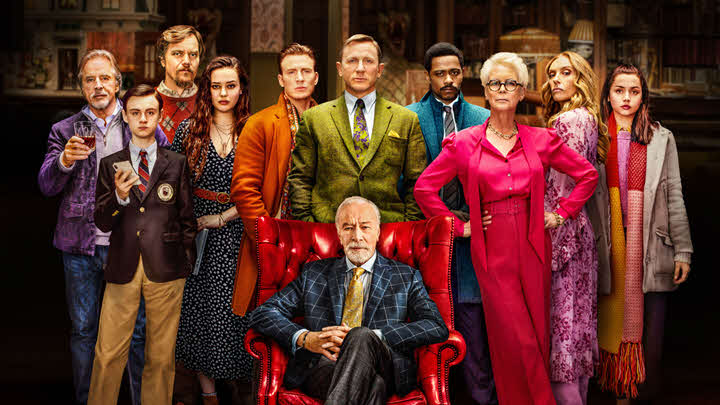 When the famous writer Harlan Thrombey is found breathless in his mansion, just after his 85th birthday, the curious and playful detective Benoit Blanc is appointed to investigate the case. Between Harlan’s dysfunctional family and his devoted employees, Blanc juggles secrets and backstage games to find out the truth about the crime.

Who is the killer? It’s not who we think. A very enjoyable mysterious “who did it” type movie with a unique take, movies like Knives Out also feature detectives or people investigating(or planning) a crime, trying to find out who the real murderer is, or playing games with others to advance their own agendas.

In a large, secluded Victorian mansion, several picturesque characters gather to dine at the mysterious invitation of an unknown host. They all have secrets to hide from those who have been vilely blackmailed for years.

When the house goes dark because of a momentary power failure, the blackmailer is found murdered in the living room. Now, you must find out which of them is to blame. A very complicated task considering that all of them had strong motives for committing the crime.

Adaptation of the famous mystery game “Cluedo” to the big screen. A very similar setting, so if you want movies like Knives Out, this should be your first pick.

Hoping to get rid of a defamation charge, journalist Mikael Blomkvist moves to a remote island in northern Sweden, where the unsolved death of a young woman still torments her uncle forty years later.

Suspecting that the killer may still be on the island, Blomkvist undertakes an investigation that leads him to uncover the secrets and lies of a powerful and wealthy family. He has an extravagant ally, the punk hacker Lisbeth Salander.

Worth to note that this movie also features Daniel Craig and Christopher Plummer, which is an extra reason why this is a great choice for movies like Knives Out.

Andrew Wyke is a prestigious writer of intriguing novels. Furthermore, his passion for games of genius and riddles has led him to turn his large mansion into a kind of museum, where the most extravagant toys and mechanisms are on display.

One afternoon, he invites Milo Tindle, his wife’s lover and owner of a chain of beauty salons, to his house to propose an ingenious plan from which both of them could benefit. Milo wants Andrew’s wife, and all he has to do is play a series of games to get her.

But the games could prove to be … deadly. While this isn’t a “who did it” like Knives Out, the mystery, the setting and the twists make this a worthy suggestion.

A literature student hands his professor, a well-known writer, the manuscript of his first novel. Desperate and anxious for a new success, the famous novelist plans to murder the young stranger and appropriate his work.

What follows is a game of cat and mouse, with several twists and turns that will leave the viewer intrigued and satisfied.

Murder on the Orient Express brings up the famous detective Hercule Poirot to try and solve what became one of the most infamous crimes in history.

Following the shocking murder of a wealthy businessman on the luxurious European train heading west in the middle of winter, private detective Poirot must use all the tools at his disposal to discover which of the eclectic passengers on the train is the murderer before he strikes again.

A classic “who did it” this will be very enjoyable to fans looking for movies like Knives Out.

More whodunit type films if you enjoyed Knives Out: