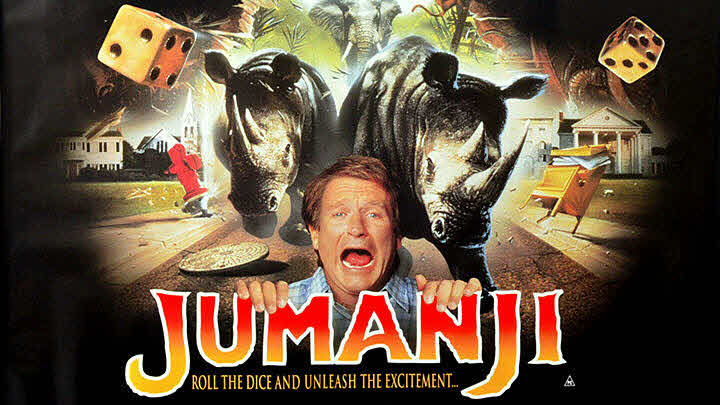 Jumanji is a very original adventure movie about a 12 year old boy called Alan, who one day starts to hear a strange drumming noise. When he approaches that strange noise he finds a “magic” board game called Jumanji. One night after arguing with his father he runs away from home and meets his friend Sarah and shows her the strange game. The frightened girl does not want to continue playing but when she throws the dice again the game absorbs Alan in a mysterious way without leaving any trace.

Years later Sarah moves with her orphaned nephews Judy and Peter to the old Parrish house. One afternoon, the kids start hearing drumming noises just like young Alan did years before, and an unpredictable adventure with, twists and dangers at every turn begins.

This is a classic Robin Williams movie that has everything: comedy, suspense, unpredictability and charm. Movies like Jumani have to have to tick all of these boxes of course. The sequels, Jumanji: Into the Jungle and Jumani: The Next Level won’t be part of the list, but they are of course logical follow-ups.

The volcanologist Trevor discovers in a copy of the novel “Journey to the center of the Earth” notes left by his brother, missing in an expedition. Trevor follows the instructions and leaves for Iceland, with Sean, his nephew, and Hannah, a researcher.

The three fall into a pit that leads them to the center of the Earth, where they will meet a lot of scary creatures, including a Tyrannosaur and many others. They have to overcome a multitude of obstacles to find his brother. The adventure, the different sets of challenges, this is a lot like Jumani.

Also Recommend: 20 Movies Like Lord of The Rings (Series)

Night at the Museum tells the story of a divorced father who applies for a job as a night watchman at the American Museum of Natural History in New York City. During the night he is shocked to experience that that the exhibits, because of a magical Egyptian Artifact, come to life during the night.

At first he does very badly trying to keep order and calm in the museum, but he will need everyone’s help to recover an Egyptian magical artifact, since it has been stolen by the ancient guards of the museum. This movie has a very similar feel to movies like Jumanji and it also includes Robin Williams.

Wayne Szalinski is a scientist and inventor who develops a machine that allows objects to be shrunk in size. A baseball accidentally activates the machine on his children, who will live a real adventure trying to cross the grass from the garden to the house, which has now become a real “jungle” for them, complete with huge creatures and major obstacles.

Who knew our garden could be so dangerous! This is a great family adventure for fans of movies like Jumanji.

When their father goes off to work, leaving them in the care of their older sister, Danny, six, and Walter, ten, are either getting on each other’s nerves, or they are bored out of their minds.

Their fights increase, and when Walter starts chasing Danny, he hides in a small freight elevator. But Walter surprises him and, to get revenge, takes Danny down to the dark and feared basement, where he discovers the old and shattered metal board game called “Zathura”; after trying, without success, to get his brother to play with him, Danny starts to play alone.

From the first move, Danny realizes that it is not a normal board game. The spacecraft moves by itself and, when it lands in a space, it ejects a card that says: “Meteor shower, adopt evasive tactics”; immediately, over the house, hot, molten meteors start falling. If this sounds like too much of a ripoff of Jumanji, it’s because it is.

This was planned to be the first actual sequel to Jumaji, but when Robin Williams declined to do it, they made it a different movie with a similar synopsis. Still a great entertaining movie!

Hidden in the attic of his school, Bastian devours during class hours an enigmatic book, “The Neverending Story”, which tells the gradual destruction of the Kingdom of Fantasy.

A kind of mysterious “Nothing” destroys the country and the creatures that inhabit it. As he advances in the reading, Bastian realizes that Fantasia’s salvation depends on him; and he manages to get inside the book, and become the hero!

Instead of being absorbed by a game, this hero is absorbed by a book, so the similarities to Jumanji are strong and the movie is a classic.