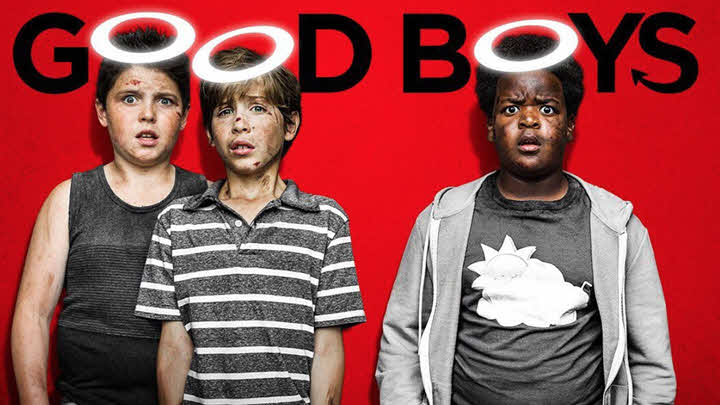 After being invited to his first “kissing” party, Max, a 12-year-old kid, panics because he doesn’t know how to kiss. Eager to learn quickly, Max, helped by his friends Thor and Lucas decide to use Max’s father’s drone, which he is not allowed to touch, to spy on a couple of teenagers in love.

But, when the whole thing goes crazy, and the boys manage to destroy the drone, the madness begins. Desperate to get another one before Max’s father returns home, the boys skip school and enter into an avalanche of decisions, one worse than the other.

When looking for movies like Good Boys, we found funny spirited comedies with a young teenage cast who usually get into some sort of trouble that they need to get out of – creating chaos all the way.

If you think we missed any similar films like Good Boys that should be on this list, then don’t forget to mention them in comments below.

This sparkling comedy has Wren in the center of the action, a teenage girl who is invited to a party by the boy for whom she had a secret crush – Aaron Riley.

All is perfect until her mother forces her to take care of her younger brother, and to accompany him on Halloween night, which means she would have to miss the party. She decides to go to the party regardless, only to lose her brother which turns everything upside down.

Evan and Seth are two friends who can never spend too much time apart from each other. That is a problem, because at the end of the school year they will go to two different universities.

Evan is a shy person in general and girls in particular, while Seth talks too much, gets his nose in where it doesn’t belong and is as fascinated by the reproductive functions of the human body. The time has come for the two to face their destiny and maybe the first night of love.

A classic Jonah Hill comedy, perfect for anyone looking for movies like Good Boys.

Because their teenage girls are best friends, their parents, Lisa, Mitchell and Hunter, have known each other for over ten years. But as time goes by, and puberty has already redefined parental dynamics, high school students are already heading for graduation.

But after finding a pact on the girls’ laptop, a pact encoded by emoticons which reveals a plan to lose their virginity at prom, the parents embark on an ultra-secret mission to overthrow their plans, even if that means they have to make it as shameful as possible and as public as possible in front of everyone. A chaotic comedy that you’ll want to watch if you enjoy movies like Good Boys.

A group of high school students are punished for the lack of consideration with which they treat the school and their teachers.

While they are serving their sentence, in a school detention room specially built for individuals like them, small offenders have the wonderful idea of writing to the US President a letter to make him aware of the shortcomings in the education system.

They have only one problem, namely, that the President loves the American education system! A cool original little comedy!

Directed by Kevin Smith, this is a frothy comedy with and for young people. Located in a mall, the movie follows a few story lines with lovers, enemies and friends.

Here they meet Jay and Silent Bob (played by director Smith), popular characters from “Clerks”, with whom they hatch an original plan to win back their girlfriends.