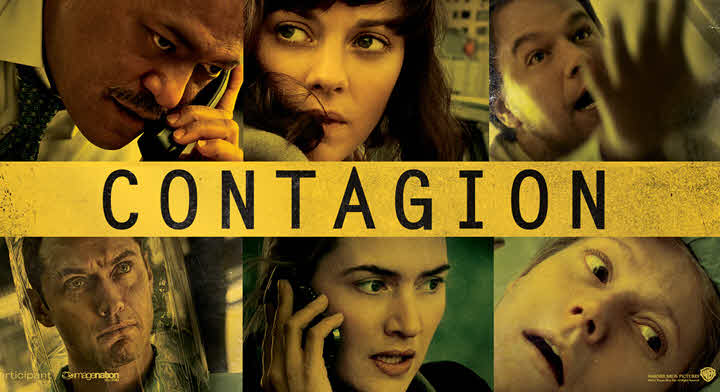 Contagion finds humanity again in danger of extinction. The emergence of a terrible virus, which spreads at lightning speed and has the power to kill in a few days, arouses fear all over the world. The medical community is overcome by the situation and in addition to the fact that scientists cannot find an antidote, they cannot stop the panic caused by deaths.

All this time, ordinary people are also trying to find a way of survival, in a society destroyed by the terrible plague. When looking for movies like Contagion, we searched for movies where a virus or plague was unleashed on the planet or in a community, where people have to fight to contain and overcome the disease/life changing event.

This list is also great for anyone looking for movies like the pandemic caused right now in the world by Covid-19.

In the face of an epidemic that is spreading exponentially, you have to react at the same speed. All the doubts and fears that this generates are addressed: what should be the role of the army? To what extent should extreme measures be taken to prevent mass contagion? Who should take the final decision? Are preventive measures effective?

With an unexpected Dustin Hoffman as the protagonist of a big-budget action thriller, this movie is both surprising, fascinating and extremely relevant today. If you’re looking for movies like Contagion on Netflix, this should be your first choice!

A group of illegal immigrants sneak into South Korea in a crowded container. When those responsible for their transport meet them in the populous suburb of Bundang, they discover that all of them have died except one, who escapes carrying a mutated and extremely contagious variant of the H5N1 virus (bird flu).

From this simple approach, a story is developed that aims to expose the direct effect on citizens of this deadly disease and how it rapidly progresses to the total collapse of the urban core in which it takes place.

At the same time, it emphasizes the behavior of health institutions, the army and political leaders, building a global panorama in which the viewer enters essentially through three characters that will serve as cohesion for all the plots and conflicts. When looking for movies like Contagion, The Flu is a must see!

London, 2027. Humanity is sad after the world’s youngest person, an 18-year-old boy, is killed in Buenos Aires. Through this introduction, we can appreciate the worldwide tragedy presented by the film. It has been 18 years since there were no births, due to a problem of female sterility.

The crisis is aggravated by illegal immigration, and those who are caught by the forces of the current government are treated without the least pity, isolated and deported to a horrible place, where they live like vermin. The film takes place a midst much violence and darkness. It is an atmosphere of oppression.

The world presented is one consumed by self-destructive progressivism. The lack of children is expressed through dirt and lack of color. The film is a social critique of the consumerist and value-less world we live in today. The film shows the possible consequences of the inconsiderate acts that we human beings commit.

The story tells of a strange and sudden epidemic of blindness that attacks the population indiscriminately, leaving those affected completely blind, immersed in a milky white mist.

As the disease spreads rapidly and it is not very clear which is the vector of transmission, the authorities decree a quarantine for all those infected and confine them in various government buildings, guarded by soldiers.

The first to arrive at the center will form the main group in the film. In the first room of the centre will be a doctor (Mark Ruffalo), his wife (Julianne Moore), a prostitute (Alicia Braga), an elderly one-eyed man (Danny Glover), a child, an Oriental man who was the first declared case of blindness and his wife, a car thief, and a motley crew of various people who will complete the room until it is overcrowded. A unique and interesting film like Contagion that you don’t want to skip.

World War Z is a challenging movie in narrative terms. In that journey of the character in charge of recording them, there are many interviews that work perfectly, but there are many others that become monotonous. Max Brooks combines the zombie theme with political, social, religious and psychological themes.

In that journey of the character in charge of recording them, there are many interviews that work perfectly, but there are many others that become monotonous. The film World War Z focuses on a single character, a former member of the UN who, after working in crisis areas in Africa, is entirely devoted to his family, in an attempt to lead a more normal life.

One day, when the family is out for a walk, it goes from emotion to absolute tension as it faces an unexplained attack in the middle of a crowded street of cars in Philadelphia, which are overwhelmingly destroyed as people run for their lives from others of their own kind who suddenly want to devour them.

While this is a Zombie movie, it has a very similar feel to Contagion and that is why it absolutely deserves a place on this list.