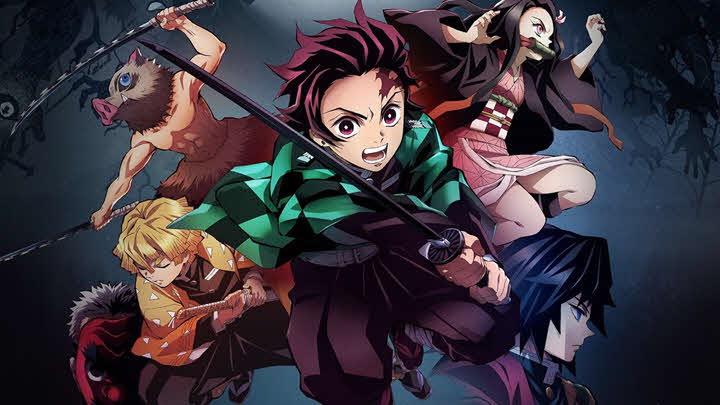 Tanjiro has decided to become a demon-hunter in the wake of the massacre his family suffered, and since his sister was transformed into a demon, his main mission is to return his sister to normalcy and find the demon that killed his family and destroy it.

This feels like a raw, brutal story, that gets you down to your bones, makes you sad, and moves you, develops at an excellent pace and then moves on to something more bearable but equally good.

A classic Shonen and one of the best anime of its kind, anime like Demon Slayer (Kimetsu no Yaiba) have to have similar heroes looking to become powerful and avenge someone or try to win the fight between good and evil.

It all begins with a legend, many years ago the kingdom was attacked by a giant demon which was about to destroy everything in its path, but the strongest wizard of the kingdom, known as the first Wizard King, was responsible for stopping it.

Many years later, two young orphans who were abandoned in a remote church within the Clover Kingdom will have the destiny of becoming magical knights competing for the greatest goal: to be the next Wizard King.

The story revolves around, Hyakkimaru, a young man from old Japan, who travels facing demons and recovering parts of his body every time he defeats one. This is because his father, made a pact with the demons to bring prosperity to his land, offering them what they wanted.

Thus, they decide to take everything from Hyakkimaru except his life, so he was born without limbs, senses and skin. This young man, who for the most part has few expressions at the beginning of the story, is accompanied by Dororo, an orphan whom he meets and who decides to travel with him after seeing his abilities.

This is an absolute classic and a similar anime like Demon Slayer you should watch if you haven’t already. The plot has everything, it’s deep, well written, dark, funny and engaging.

Bleach is a supernatural manganese shonen of action and adventure.The main character is Ichigo Kurosaki, a teenager who is anything but ordinary. He can see spirits and has the ability to interact with them.

Bleach’s plot begins when one night Ichigo Kurosaki meets Rukia Kuchiki, a shinigami (a god of death). Bleach’s plot focuses on the adventures of this fifteen year old who has accidentally absorbed the powers of a Shinigami and must do Rukia’s job until she manages to regain her powers.

He will have to use these skills to guide good souls after death and protect them from the hollows. Another absolute classic and a must watch anime similar to Kimetsu no Yaiba (Demon Slayer).

A story in the feudal era with the current touch of comedy and youthful romance makes this anime perfect if you want to see more anime like Demon Slayer. This story takes us to know Kagome Higurashi, a young woman who lives in the present Japan, when suddenly one day she is sucked by a well that was in the temple that is located in her house.

After this, she is taken mysteriously to the ancient feudal epoch of Japan, here she knows Inuyasha, who after being attacked by a Yokai, asks her for help in defeating him. This youkai desires the pearl of shikon, as do most of the youkai of the time.

Kikyo was a priestess who was in charge of protecting this pearl, as it is extremely powerful and in the hands of any youkai it could be misused. Kikyo died, after an incident with Inuyasha. After 50 years, Kagome is born as the reincarnation of Kikyo. Another classic anime you don’t want to miss.

It is the year 1930, in the imperial capital of Japan a group of mysterious people known as “Jaegers” have just arrived at Tokyo station, carrying musical cases.

They are hunters who came to eradicate the vampires that have come to the country of the rising sun from the old continent. Among them a young man named Yuliy, known for his unusual aura – is a Sirius – a werewolf who seeks revenge for the destruction of his clan.

He and the Jaegers will now begin a search to find these blood drinkers, getting involved in the process in the mystery around an ancient box searched by the vampires, and related to the young man’s past.

Also Recommend: 16 Anime Like The Rising of the Shield Hero

More Anime shows to watch if you liked Demon Slayer: