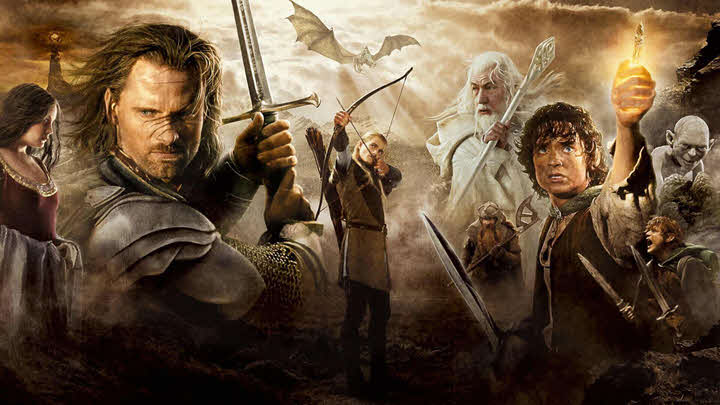 The legendary Lord of the Rings trilogy begins when Bibo Baggins, a Hobbit from the Shire wants leave all his belongings to his nephew Frodo. Bibo’s powerful ring, with which he can make himself invisible, is of great importance and power, and Bilbo wants to take it with him but is stopped by the wizard Gandalf.

It is now Frodo’s burden, and he has to carry it himself while kept a secret from all. And thus, an epic adventure of bravery, friendship and darkness begins. When it comes to fantasy films, The Lord of The Rings is probably at the top of most lists. If you’ve enjoyed this epic saga and are hungry for something similar, this list is for you.

The following movies are all about bravery, some in fantasy settings, others with a historical approach. All follow extraordinary heroes, and larger than life villains. If you think we missed any similar films like ‘The Lord of the Rings’ (Series) that should be on this list, then don’t forget to mention them in comments below.

Movies Similar to The Lord of the Rings (Series)

Mel Gibson launches into the historical genre with one of the greatest demonstrations of epic cinema in history: Braveheart. How has the passing of the years affected William Wallace? With love, pain and revenge as our weapons, we look at this classic of the ’90s. Patriotism. Religion. Love.

Three recurring themes in the career of one of the most particular film directors in history, whose visceral gaze has left us jewels like the one we are dealing with here.

Immersed in the lands of Scotland, the film presents us with a people betrayed before the merciless will of the King of England, Edward I (Patrick McGoohan), to whom they owe allegiance as sovereign.

If you are fascinated by movies like Lord of the Rings and want something that feels just as real, just as epic, Braveheart is the way to go.

Gladiator is an American film directed by legendary director Ridley Scott. It was released in 2000 and stars Russell Crowe, Joaquin Phoenix and Richard Harris. The film can be classified as adventure, action and high drama.

It is set in imperial Rome, starting at the end of the life of Emperor Marcus Aurelius, showing how his son Commodus becomes emperor, which leads to end of the High Empire and the Flavian dynasty. We are introduced to the pseudo-historical part of the film, which includes the main character, General Maximus, and everything that surrounds him.

Desperate to defeat Maximus, Commodus prepares a head-to-head battle in the coliseum, where Maximus will have to show what he is truly made of. When looking for Movies like Lord of The Rings, Gladiator is a top choice because of the medieval setting, the action, drama and fascinating main characters portraying the classical fight between good and evil.

The amazing story of The Boy Who Lived takes us in a world just like ours – apparently, but there is one important difference. Humans with magical abilities live among us, in complete secret and impossible for regular people to detect.

Harry is an orphan, living with his horrible uncles and his cousin Dudley. But one day, his apparent ordinary live becomes quite extraordinary, when a visit from a Giant with a special letter begins an adventure where he is expected to be the hero – yet he is totally unprepared for it.

This is a story of courage, magic, wizards and witches, friendship, love and hate. As Harry grows up and learns more and more about the magical world, so does his task become darker and darker.

The story of Spartan King Leonidas and his 300 Spartan warriors who have to fight against a Persian “God-King” Xerxes and his army of soldiers. Due to the fury and importance of the battle, the Spartan queen tries to get the support of Sparta for her husband, inciting the Spartan senate that “The king would die if they did not send the army”.

However, the senate betrays all Sparta, leaving Leonidas and his 300 men abandoned on the battlefield having to face Xerxes all by themselves. This is an amazing visual story about the odds being stacked against a legendary hero that must find a way to go on, even in the face of certain death.

This is a truly unique and memorable movie, and extremely worthy of being on a list of movies like The Lord Of The Rings.

The popular film trilogy of “The Hobbit” is based on the novel of the same name written by J.R.R Tolkien and published in 1937 and is also directed by Peter Jackson, the director of the Lord of The Rings Trilogy.

In a timeline within this fictional universe, The Hobbit takes place in the year 2941, in the Third Age of the Sun, and tells the story of the evolution and growth process of the main character, Bilbo Baggins, as the main axis of the story.

This is a movie about a hero’s personal development, because the protagonist strengthens his identity and acquires greater confidence in his abilities and environment thanks to the journey undertaken.

Some of the moral topics such as overcoming the greed and selfishness that exercise the ring as a magnet for those who possess it. This makes the Hobbit an ideal movie like Lord of the Rings to watch, especially since its about the same universe and directed by the same director.

More film recommendations if you enjoyed The Lord of the Rings (Series):