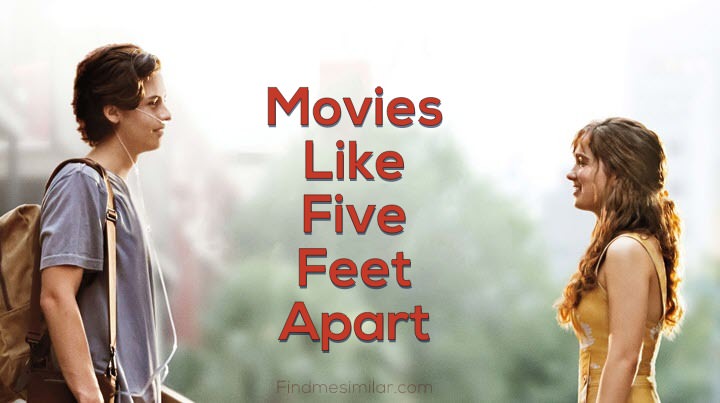 The movie Five Feet Apart tells us the story of Stella (Haley Lu Richardson), a teenager suffering from Cystic Fibrosis, a fatal disease that limits the life of those who suffer from it, leading them to be hospitalized constantly and for long periods of time.

Stella is a fighter and it is there, in the hospital, where she meets Will (Cole Sprouse), another patient of Cystic Fibrosis, who with his rebellious attitude calls her attention to gradually fall in love with him – but there is a unique problem: Cystic Fibrosis does not allow patients who suffer from it to come into contact with each other.

They are forced to stay at at least five feet apart so Stella and Will have to live their love without contact, wanting to touch, kiss and love each other, but not being allowed to. A unique love story with tragic implications. Movies like Five Feet Apart are about extraordinary love stories, some forbidden, some impossible, some in the face of tragedy.

Katy Price is a teenager who suffers from a strange condition that makes her vulnerable to the sun’s rays, a slight exposure in broad daylight could kill her. That is why she has spent all her life locked up in her room, except at night when her father lets her go out to the train station to sing and play the guitar.

On one of those nights, Charlie, the handsome boy in the neighborhood hears her singing and a “love at first sight” emerges. The two begin a summer romance that will be marked by Katy’s illness and its consequences.

When wanting to watch more movies like Five Feet Apart, this is a top choice because of the special condition of the main character. How the couple tackle that and how they overcome it is the central theme of the movie.

The film tells the story of Kathy, Tommy and Ruth, and their experiences in a boarding school in England; together they will learn the importance of friendship, art and love, as they prepare to accept and face the reality they never anticipated.

Never Let Me Go is a film full of poetry. It is powerful, brilliant, passionate and a compelling viewing for people looking for movies like Five Feet Apart.

A literary adaptation, this is another designed for young audiences, whose main plot lies in the romantic and impossible love between two young people who are perfect for each other – only that there is a problem which is what gives meaning to the film.

Every Day introduces us to the story of Rhiannon – an ordinary teenager in high school. One day, she has the most incredible day she has ever had in life with her boyfriend Justin, just a perfect special day.

What Rhiannon does not know, is that Justin that day, was not Justin, but a traveling soul, which changes body every day, and this soul called A. This soul falls madly in love with Rhiannon, making her look for it every day in a new body.

This unexpected love story is about a teenage rebel, Landon Carter who was part of a gang. Once the new guy who wanted to join was made a fool of, Landon gets in trouble with the school. As a punishment they put him in drama class and there he meets Jamie (Mandy Moore).

Landon begins to like Jamie and hides that from his friends in his group. They met, became friends and fell in love. What follows is a story about change, regret, love and tragedy. Landon’s life is about to be changed in ways he never imagined.

Will Traynor (Sam Clafin) is a rich and successful man who has enjoyed his life, until he ends up involved in a motorcycle accident that leaves him permanently disabled. A couple of years later, Louisa Clark (Emilia Clarke), a 26-year-old girl with diminished ambitions, is fired from her job and forced to find one immediately.

Luckily for Louisa, it doesn’t take long to find one, and that is caring for a disabled man. Will’s mother hires Emilia in the hope of bringing back the joy in her son’s life that has changed his attitude since the accident. As the days pass in this house, Louisa begins to realize the problems with her parents and the suicide attempts that Will has had.

The couple fall in love, but they have to tackle the unique tragic condition and incapability of being together as a regular couple. This is a tough movie with a complicated message, making it a must watch for fans of movies like Five Feet Apart.