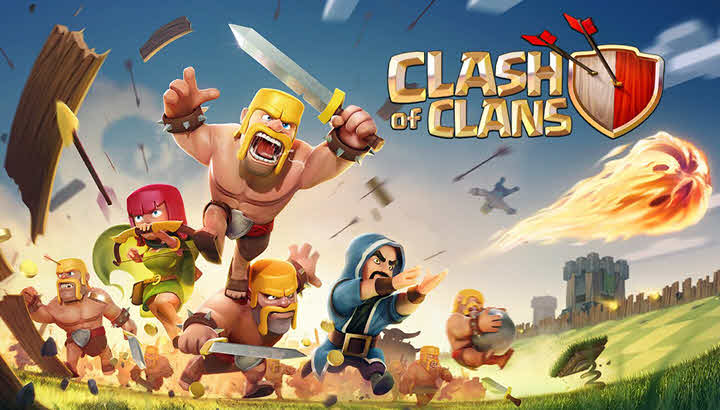 Clash of Clans is a mobile strategy game that is based on building and improving a village. As almost all games of this type, the main objective is to attack other villages and through a percentage of destruction increase cups to climb in the league and get resources to improve your own village.

Today the game consists of 12 levels of town hall, this in turn contains a variety of levels in the defenses, troops, potions and resources available to each town hall. The game mechanics are has many functions, there are different troops with which you can make countless strategies to attack the other villages and destroy them completely by stealing their resources.

There is also a clan system in which you can organize wars against other clans. Games like Clash of Clans are also about building a base, upgrading your defenses, structures, armies and troops, and conquering other bases yourself.

You are given a choice of 6 civilizations: Byzantines, British, Franks, Teutonic Order, Kievan Russians and Saracens. Each one has its own style of construction, heroes and special units. It can be changed later, but it requires gold.

The game’s resources are Food, Wood, Stone, Gold, Crowns and Pennants. Other players can invade you, so you must have your castle with plenty of protein. You can also invade yourself to plunder resources. Each player has 5 minutes to destroy and loot as much as they can. A great alternative for anyone looking for games like Clash of Clans.

Total War Battles: Kingdom looks more like a 4X title – Exploration, Expansion, Exploitation and Extermination – and of construction of empires in which the combat takes a more fundamental and outstanding aspect.

Exploration, resource acquisition and expansion is essential, giving us the opportunity to open up to larger military campaigns and greater and greater battles, as long as we meet our objectives as managers.

In this way, we will spend a lot of time cutting down trees, building walls and castles, planting fields and building roads to unify population centers through mapping hexagons, while collecting daily tributes and tame gold and money. A more authentic kingdom experience for fans looking for alternatives of Clash of Clans.

Star Wars: Commander is basically Clash of Clans set up in the popular Star Wars universe. The game mode is quite simple. The player must build different types of buildings – such as forts, shields, towers with cannons, buildings – to create soldiers. He must also create vehicles in order to attack and defend their base.

The constructions require crystals that are obtained by destroying enemies or also by buying them online. Of course, you can attack other bases, steal their resources, and try to defend your base as best as possible against enemy attacks. Good clean fun!

Guardian Kingdoms is built on pioneering technology for aggressive team battles, enabling multiplayer experiences never before attempted on such a large scale on mobile devices. This mobile innovation allows for a true strategy game experience reminiscent of classic Blizzard, Warcraft or Starcraft, rather than the rival Clash of Clans.

Guardian Kingdoms also sees players enjoying co-operative play complemented by story-driven quests and massive challenges for team raids. If you’re looking for games like Clash of Clans, this is like that and much more!

Jungle Heat will turn the jungle into a battlefield. As you will see below, it is a very Clash of Clans style game, in which we will have to create our army and go to war.

Unlike Clash of Clans, we will be in the Jungle this time, we will have to collect minerals and elements from our environment to build our army and improve our base. The main resources we have at our disposal are oil, precious stones and gold.

One of the things that makes the game really fun is the inclusion of heroes – just like in Clash of Clans, which have superior characteristics and functions to the other characters. The fun lies in the fact that these heroes will be familiar to us, and that they are winks from well-known characters that are in everyone’s collective imagination: Indiana Jones, Lara Croft, Rambo, Chuck Norris. and many more.

More games like Clash of Clans you may enjoy playing: