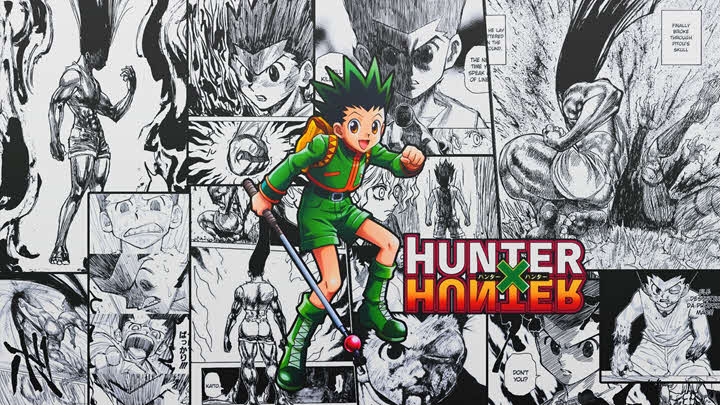 Hunter x Hunter is an exhibition of an adventure of great proportions, a great adventure of life where each bow will have its own lessons and messages that will make our protagonists grow and that, in passing, will make us reflect as spectators.

The story presents us with a world that is modern but with elements of fantasy and mysticism, where although there are cities with all the comforts that modern technology can offer, at the same time there are exotic and surprising creatures, possessing incredible abilities, and places full of mystery and danger.

This is where the Hunters come in, a group made up of men and women of great talent and specialized in various areas (from bounty hunters and adventurers to cooks and archaeologists), who under the protection of the Hunters Association to hunt the various mysteries and secrets hidden in the world.

The plot introduces the protagonist Gon, a young, good-natured, lively, somewhat wild and possessing great physical abilities, who decides to become Hunter to try to find and meet his father who years ago left him in the care of his aunt on a quiet island. Anime like Hunter x Hunter will be adventurous, have smart protagonists, mind games, cool plots and twists.

The series is about the lives of certain children living in a city built around a large hole (called the abyss) found in a place on earth whose depth is totally unknown. As expected, human beings have dedicated themselves to exploring it in order to unveil its secrets.

However, entering this place is not as beautiful as it seems at first sight, since not only will you have to survive the attacks of the creatures that live inside it (the deeper you go, the more powerful and hostile they are), but you will also suffer something known as the curse of the abyss: a series of consequences that your body will have to endure if you move upwards once you are inside the abyss.

These effects range from mild things like dizziness and nausea to death itself once you are in the deepest layers, so if someone wants to go all the way, they must know that they can never go back. A great choice for fans of anime like Hunter x Hunter.

The story stars Sora and Shiro, brother and sister, who are very famous all over the Internet as NEETs and hikikomoris who spend all day playing video games, so much so that they are legends. They both consider the real world to be “a bad game”. One day, a boy named “God” summons them to another world.

There, God has forbidden wars and declares that everything in the world will be decided by games, even what the borders between countries will be. Humanity has been reduced to a single city because the other races have taken away all the territory.

Shiro and Sora will have to be the saviors of humanity in this alternative world. A unique plot with fun characters, if you’re in the mood for anime like Hunter x Hunter this is yet another great pick.

The story begins with Jonathan Joestar who is part of a very powerful British family, almost on a whim of fate embarked on a crusade against a powerful vampire. However, it doesn’t end there, since the entire Joestar lineage must face evil when it appears.

But little by little the series increases in pace to find the way in which it wants to tell the story. Things get more and more bizarre, with zombies, vampires, Nazis, killer squirrels and totally fabulous poses taking over the screen and making us fall in love with Joseph Joestar.

Yusuke Urameshi is a young teenager of 14 years of age, a juvenile delinquent, who in a moment of redemption makes the attempt to save a small child by pushing him out of the road where a car was coming, which hits him instead, causing his immediate death.

In the underworld he is received by Botan, the one in charge of transferring the souls to the Subterranean World or Reikai, for his judgment for his works performed on earth.

If anime like Hunter x Hunter is what you are looking for, this is a great choice as it is created by the same author, Yoshihiro Togashi.

Dororo is set in the midst of the Sengoku Era, a turbulent period in Japanese history when war and political instability plagued the islands’ well-being for more than a century. The local clan chiefs saw their power increase, thus beginning an era of squabbles and internal wars between these local chiefs that ended up fragmenting the national territory.

Rot and misfortune devastated the lands of the daimyo Daigo Kagemitsu; factors which, together with its excessive ambition, led it to forge a deal with the same evil. Willing to do anything, the pretentious Daigo makes a pact with the demons in exchange for power and fortune.

But of course, the champions of hell demand something in return: the life of their future child. Thus, the child is born without 48 body parts. Devoid of any glimmer of hope, the feudal lord decides to take away the little life that resides within him, in contrast to his mother’s wishes.

A darker story yet just as fascinating, this is another quality anime like Hunter x Hunter to binge watch and enjoy.

More anime recommendations if you like Hunter x Hunter: