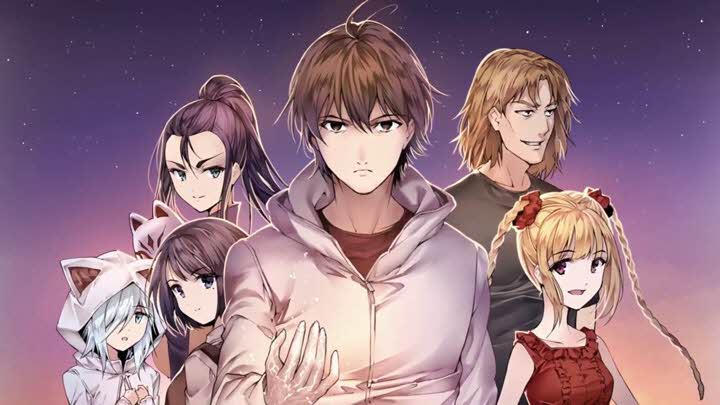 Sudou Kaname receives an invitation to play a mysterious mobile game known as Darwin’s Game from his friend Hamada. Thinking it to be a random free to play game he accepts the invite and starts playing it. He soon realizes that the game is not like any other game he played and his life is at stake now.

To learn about the game and survive he allies himself with other players in the game and must now try to survive and get out of the game. If you are looking for more death match game anime that is all about survival and battle of wits then look no further.

Here are some amazing anime recommendations for Darwin’s Game. Think we missed any similar anime like Darwin’s Game that should be on this list? Then don’t forget to mention them in comments below.

Yukiteru Amano is a shy lonely high school student who mostly spends his time writing a dairy in his cellphone. He has only one imaginary friend Deus Ex Machina, however he soon realizes Deus is an actual entity and he is a god of time and space.

Deus is dying and wants to select the next god to take his position through a death match game where Yukiteru is one of the twelve participants. Each of these players are granted with a special future dairy with unique powers. The aim of this game is to kill other future dairy holders and become the next god. Yukiteru teams up with another dairy user Yuno Gasai who is obsessively in love with him.

There are many similarities between Mirai Nikki and Darwin’s Game, both the male protagonists here find themselves in a deadly survival game and both have the help of a more powerful and obsessive female leads.

The Anime follows Ryouta Sakamoto a 22 year old shut-in NEET (Not in Education Employment and Training) who lives with his mother and spends all his time playing video games.He is the best player in Japan’s popular online action game called Btooom!

All of a sudden he wakes up in an unknown tropical Island with a case full of grenades and a green crystal embedded in his hand. After being attacked he realizes that he is in a real life version of his favorite game and must now survive the deadly game.

Both Btooom! and Darwin’s Game have a lot of similarities like the protagonists are forcefully dragged into a death game they don’t want to be a part of and the players in both anime has a unique powers(Darwin’s game)/grenades (Btooom!) to the participants.

When Kei Kurono and Masaru Kato are killed in an train accident, they are resurrected by a strange black ball called ‘Gantz’ to take part in a game with several other recently resurrected people.

Now they are forced to hunt down alien criminals invading and hiding on earth using several futuristic weapons. Both Gantz and Darwin’s Game are taking place in real world, however they cant communicate with other people who aren’t part of it.

Note: This anime is not for faint of heart as this contains some disturbing themes such as heavy violence, gore and sexual contents.

Caligula is an Anime adaptation of the video game called The Caligula Effect. The anime follows the Story of an AI μ (Mu) who in her quest to bring happiness to humanity. To realize this she invites a group of people to live in a simulation virtual world called Mobius.

In Mobius Mu provides all the desires while they forget the reality believing Mobius is the reality. When Ritsu Shikishima finds out about the actual reality, he creates a ‘Going Home Club’ with eight others who realized the truth and tries to escape the simulation.

They must now use their emotions as a source of their power and escape from Mu and the mysterious Ostinato Musicians behind her. In both Darwin’s Game and the Caligula the players are trapped in a virtual world and are now trying hard to exit it.

Kanazawa Nobuaki who transferred to a high school faraway is afraid of getting close with his classmates due to the event that happened in his previous school involving the King’s Game. The King’s Game begins when you receive an email text from the king which includes instructions that has to be completed within 24 hours.

Failing to complete the task or trying to quit the game you will have a gruesome death. One day, Nobuaki and his entire class receives a strange message The King every one takes it as a joke, but only Nobuaki knows what it means. When he tries to warn others of this game they refuses to believe his warning at first until they realizes the real danger.

Nobuaki must now try to help his new classmates from this game unlike in his previous school. Both Darwin’s Game and King’s Game are mobile based survival games with gruesome deaths.