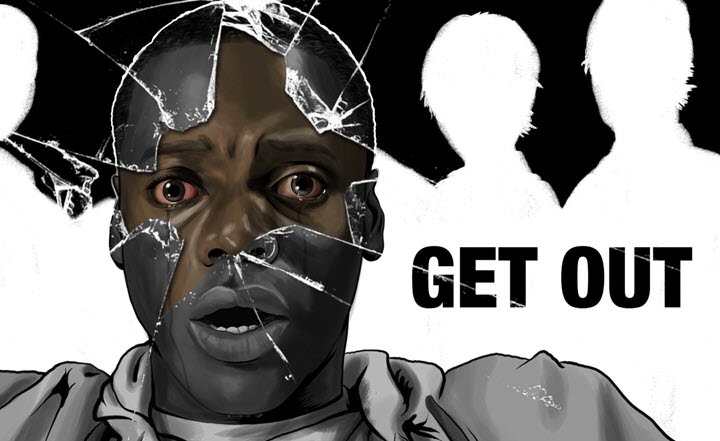 Chris (Daniel Kaluuya, Sicario) and his girlfriend, Rose (Allison Williams, Girls), have gotten to the point of their relationship when he is about to meet the girl’s parents, Missy (Catherine Keener, Captain Phillips) and Dean (Bradley Whitford, The Cabin in the Woods).

At first, Chris believes that the girl’s parents’ exaggerated kindness is just an emotion provoked by their efforts to get used to the idea that she is in an interracial relationship, but, as time goes by, a series of bizarre and increasingly bizarre things start to happen. Just how disturbing and terrible the actual truth would be, he could never have imagined.

This is a mystery thriller that keeps viewers on the edge of their seat, as the plot unfolds and we find out the real secret behind it all. Movies like Get Out are both psychological and emotional thrillers, where the main characters have to navigate an uncomfortable situation as best as possible.

If you think we missed any similar movies like Jordan Peele’s Get Out that should be on this list, then don’t forget to mention them in comments below.

Best Movies Similar to Jordan Peele’s Get Out:

A subversive and humorous look at consumer society and perfectionism forms The Stepford Wives. The film underlines what it means to be human in antithesis with a perfect micro society located in an idyllic town and as if painted. A perfect micro-world in a chaotic macro-world.

Joanna Eberhart (Nicole Kidman) thinks she has reached the top in every respect. She is the youngest president in the entire history of a television network – EBS, has a very caring and loving husband and two beautiful children. On the surface, Joanna has a life that seems perfect until a day full of misfortunes, when everything collapses around her.

Something is happening to the Stepford Wives, and Joanna is definitely not ready to learn the truth. This movie is a perfect watch for anyone looking for similar movies like Get Out, where the mystery unfolds and concludes with a shocking truth.

It all begins with Eden’s (Tammy Blanchard) invitation to her group of friends. It’s a reunion dinner, since they haven’t seen each other for more than two years. What should be an evening of laughter and complicity-filled conversations becomes something unexpected that has nothing to do with pleasure.

There is in the still passionate feeling of a penetrating trauma that time has turned into a taboo, that cannot be disguised when the complex sentimental network faces the meeting. Something that everyone knows and no one mentions for fear of awakening ghosts from the past, which in reality have never ceased to be.

For anyone searching for movies like Get Out, this is a must see with very similar tones and pacing.

Adelaide Wilson is a woman who returns to the vacation home where she spent her childhood, along with her husband, Gabe (Winston Duke), and their two children, for a well-deserved summer vacation.

Faced with childhood trauma, unexplained and still unresolved, now brought to the surface and aggravated by a series of bizarre coincidences, Adelaide is becoming increasingly certain that something terrible is about to happen to her family.

After spending a stressful day at the beach with their friends, Tyler, Adelaide and her family return to their vacation home. But, as the evening falls, members of the Wilson family notice four eerie figures that refuse to leave their driveway. To their horror, they discover that the four silhouettes are, in fact, duplicates of theirs, doppelgangers who came upon them with a precise purpose.

After a long and unsuccessful tour, a punk rock band is unexpectedly hired to play in an unknown club located in a lost woodland area of Oregon. What should have been just a concert in a third-rate venue turns into an agonizing and claustrophobic nightmare as the band encounters a horrific act of violence behind the scenes.

An intense action and siege thriller, emotionally and wittily twisted, Green Room is a good example of the best genre cinema, as shown by the enthusiastic reception it received at its Cannes Film Festival premiere. Mystery, violence, intrigue, this movie has everything someone looking for movies like Get Out would want to see.

Craig Schwartz (John Cusack), an unappreciated puppeteer, is hired as an officer on the 7 1/2 floor of an office building. Bored by his 10-year marriage to Lotte (Cameron Diaz), Craig becomes obsessed with the beautiful Maxine (Catherine Keener), who rejects him.

Angry, Craig returns to his office, and in a moment of exasperation, he knocks on a door and discovers a secret passage. Caught in a dark, damp tunnel, Craig realizes he has discovered access to the unique experience of being … John Malkovich!

He just managed to enter into John Malkovich’s mind! And this is just the beginning. A fun, original and thrilling experience, you’ll love this if you love films like Get Out.

More film recommendations if you enjoyed Jordan Peele’s Get Out: