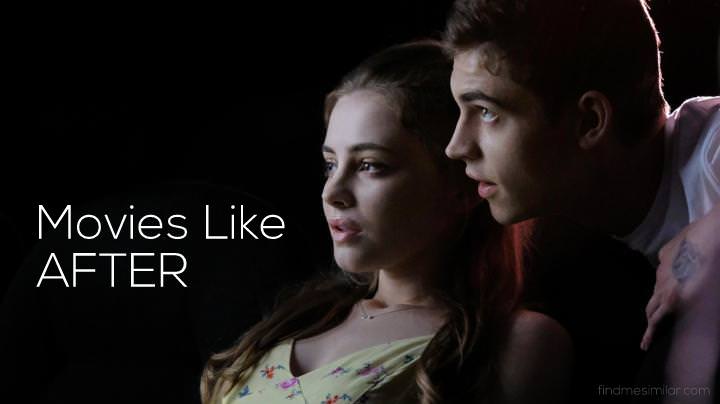 A young woman falls in love with a man who has a dark secret, and the two begin a stormy relationship. Tessa Young (Josephine Langford) is a dedicated student, a conscientious daughter whom her mother – Carol (Selma Blair) who raised her daughter alone – can always rely on.

She is a loyal girlfriend when it comes to her boyfriend Noah (Dylan Arnold). But everything changes when she meets Hardin, a mysterious young man. When Hardin invites her to visit his “secret place” – an extremely beautiful place, near the lake, off campus – she shows her vulnerability and an unwanted desire inside to explore herself.

Tessa begins to let her guard down and opens up to Hardin, discovering that they have more in common than she could have imagined. As the romantic and physical relationship between the two flourishes, Tessa’s mind gets even more confused when she learns that Hardin is hiding a secret that threatens their relationship.

If you’ve enjoyed After and are looking for Movies like After, we’ve compiled a list that focuses on tough but romantic relationships between the protagonists. There is usually some sort of difficult or even tragic obstacle they must overcome.

Two young people struggling with an irreversible disease who meet and fall in love in the halls of a hospital have the choice between staying at a distance of five steps from each other, in order not to be contaminated with possible infections, or to – live your life and know your love by taking a step closer to each other.

The decision here has major implications, and when looking for movies like After, it is the most solid of recommendation.

When Elle Evans, a beautiful teenager who didn’t have the experience of the first kiss, decides to attend the kissing booth at the Spring Carnival of the high school, she kisses Noah, her secret love. The sparks fly, but there is a small problem: Noah happens to be the brother of her best friend, Lee, and this is totally outside the limits, according to their friendship pact.

She develops a secret love affair with Noah, a story that tests her friendship with Lee. Elle’s life comes to a head when she realizes that she finally has to make a choice: to follow the rules or to follow her heart.

Although a miraculous drug prolonged her life, 16-year-old Hazel Grace Lancaster has the impression that she has been “in the terminal phase” ever since.

But when the charming Augustus Waters, suffering from the same terrible disease, appears at a support group meeting where Hazel goes, the girl’s story will be completely rewritten.

Related spirits, sharing the same charm and sense of humor, Hazel and Gus begin a race against the clock in which they will learn what it means to love.

Inspired by JoJo Moyes’ bestseller, the film follows the story of Lou, a young woman with no prospects in a small town, and Will, a successful man in a wheelchair after an accident.

Will feels he has nothing to live for until he hires Lou as a nurse. To prove to him that life is worth living, Lou helps him go on more adventures together. To the surprise of both, this experience changes both of them.

Lara Jean Song Covey can rather be described as a house sparrow. Since the death of her mother, she prefers to spend time with her family: big sister Margot, little sister Kitty and father Daniel.

She has already been in love, but has never done anything with it except writing letters to the boys in question. Letters she never sent. But that happens after all these years anyway.

The biggest complication: one of those letters is addressed to her sister’s sweetheart, who happens to be their neighbor’s boy. To solve this problem, she uses a more unconventional method.