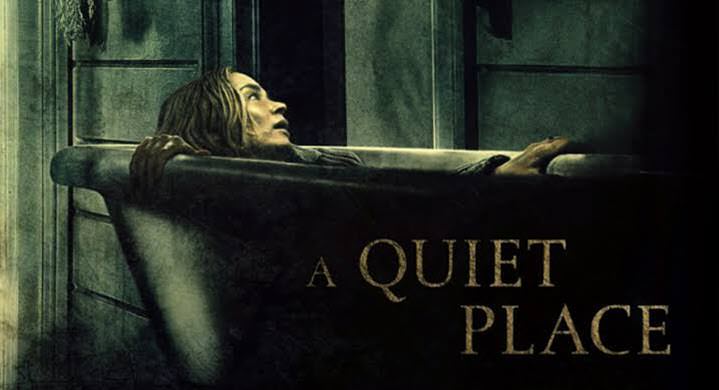 A Quiet Place takes us to a near post-apocalyptic future in the year 2020, where the human population has been practically annihilated by extraterrestrial creatures that easily detect humans thanks to their hyper-developed hearing. Very few have managed to survive – among them the Abbott family – whose eldest daughter, Regan, is deaf.

All their family members, father, mother and two other children, learned to speak sign language. Keeping quiet is the key to staying alive, and over the course of more than a year they have developed a whole system inside and outside the house to keep the deadly creatures out of their lives. The silence they must maintain is the first attraction of this story.

To walk barefoot, to laugh without sound, to play without making the least noise is the permanent challenge of this family and especially of its parents who must make their children aware of the misfortune into which humanity has fallen and, in passing, prepare them, on the ground, for their survival. Making the slightest mistake in this regard has lethal consequences and the Abbotts experience this very early in this story.

Movies like A Quiet Place need to have a similar suspenseful and uncomfortable atmosphere. That tension in the midst of everyday life for the main characters is at the center of every story.

Hush tells the story of Maddie (Kate Siegel), a writer who leads an isolated life in the middle of the forest after becoming deaf as a teenager.

But one night a masked psychopath (John Gallagher Jr.) shows up at her window and with no one else around for miles, Maddie will have to fend for herself if she is to survive.

Just like in A Quiet Place, our protagonist lives in complete silence, and the movie is a thriller/horror/survival, a perfect alternative for someone wanting more movies like A Quiet Place.

Three friends break into the home of a blind hermit to strike what is an easy score only to discover that their life is in danger in a terrifying nightmare.

This is a captivating, brutal and twisted no-holds-barred thriller that pits three thieves against an unexpectedly dangerous opponent. They have to keep complete quiet if they are to survive.

While the premise is different, our characters MUST keep quiet to have any chance at getting out of the house. This is a perfect alternative for fans of films like A Quiet Place.

But soon after a road accident, she wakes up in an underground bunker where Howard (John Goodman) informs her that she survived a chemical attack, and that the only other survivors are him and his acolyte, Emmett (John Gallagher Jr.).

However, is Howard just eccentric or crazy? Is he a savior or an aggressor? Our protagonist is forced to uncover the secret for herself in this fascinating sequel to the hit movie Cloverfield.

Chris (Daniel Kaluuya) is a young African-American who is dating a white girl, Rose (Allison Williams). He feels somewhat uncomfortable, as she invites him to take a weekend getaway up north with his parents, Missy (Catherine Keener) and Dean (Bradley Whitford), who are unaware of their ethnicity.

At first, Chris thinks that his parents’ exaggerated behavior is due to their nervousness about their daughter’s interracial relationship, but as the hours pass, a series of increasingly unsettling situations lead him to discover an unimaginable truth.

Mysterious, uncomfortable, wanting to escape, all themes that should captivate fans of movies similar to A Quiet Place.

When the human race is attacked by entities that take the form of our most horrific fears, a woman tries to save her children by closing her eyes and trying to shelter the attackers. This mysterious force destroys a large part of the planet’s population, and one thing is certain: those who see it lose their lives.

Malorie finds the love, hope and chance of a new beginning, but all of this can be shattered. She has to take her two children and walk along the river in search of the only remaining shelter. In order to survive, they must cover their eyes and set off on a dangerous two-day journey. You open your eyes or you die.

Similar in theme, here the mechanic is keeping your eyes closed at all times, compared to not making a sound in the ‘original’. A most interesting concept as well. Bird box is a movies like A Quiet Place streaming on Netflix right now.

More film recommendations if you enjoyed watching A Quiet Place: