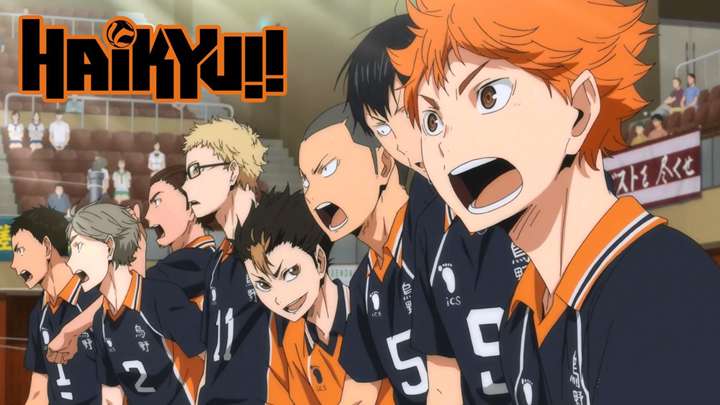 Haikyuu is an Japanese Shonen anime about Volleyball. Shouyou Hinata is inspired to be a volleyball player after watching the game of “Little Giant” on television. Even though he lacks the one important thing “Height” required for the game he is determined to be a player thanks to his amazing jumping power and super human reflexes. He forms a team with his middle school friends and enters in an volleyball tournament.

However his dreams are shattered in the first match as they suffer a brutal defeat against the opposing team due to Tobio Kageyama their amazing setter and the so called “King of the court”. Hinata vows that he would surpass Kageyama and joins Karasuno High School the same school little giant attended. To his surprise he soon learns his sworn enemy will be his teammate now.

Both Hinata and Kageyama should now patch-up their rivalry and use their amazing reflexes and volleyball skills to take the School’s Volleyball team to the top. While looking for sports anime similar to Haikyuu we looked for the stories of underdog characters who rose above their limitations and reach to the top of their fields.

Kuroko’s Basketball (Kuroko no Basket) is one of the popular Shonen sports anime about Basketball. Basket ball team of Teikou Junior High School has been winning the Basketball Champion ship for the last three years thanks to the five top players who are each an champion on their own and are popularly known as ‘The Generation of Miracles’. Post graduation all these five move to different schools and now consider each as rivals.

Tetsuya Kuroko is a former member from the legendary team also known as ‘Phantom Sixth Man’, now joins Seirin High School Upon meeting Taiga Kagami, Kuroko decides to help him become the greatest Japanese basketball player by becoming his shadow and challenging the other members of ‘The Generation of Miracles’.

Sora Kurumatani is in love with basketball ever since he can remember. Despite lacking ‘height’ the one important factor needed for the game he is unwavering and practices a lot each day to compensate his Short stature. Sora’s dream is to join a basketball team and compete in tournaments, to fulfill this he joins Kuzuryuu High School only to find out the team is full of delinquents who have no interest for sports.

In order to revive the basketball team, Sora challenges them for a match against him overwhelms all of them with his amazing skills. he rekindles the groups passion for the game with his relentless devotion for the game and impressive skills. When i saw the premise of Ahiru no Sora the first thing I remembered was Haikyuu.

Both the anime focuses on the players who lack height but compensate the shortcomings with their skills. Ahiru no Sora is a must watch anime like Haikyuu that are lighthearted sports drama with always hardworking main characters.

Ace of Diamond (Diamond no Ace) is a popular Shonen baseball anime that follows the story of Eijun Sawamura. After losing the final game in the middle school Sawamura and his teammates promise to reach the national Baseball tournament once they are in high school. However to his surprise Eijun receives a invitation from Seidou High School one of Tokyo’s prestigious schools for baseball for his unusual pitching style.

Unlike middle school Sawamura is now surrounded by many talented players and he now struggles to find place in the teams starting roster. He now has to compete with a fellow first year Satoru Furuya who is known for his breakneck pace balls to become the team’s ace. Seidou baseball team is now aiming to be Japans best, facing other formidable teams.

Both Haikyuu and Ace of Diamond focuses on teamwork among the players, passion for the game, struggle within and the developments in the characters with each challenge.

Big Windup (Ookiku Furikabutte) is another baseball anime in this list that follows the story of Ren Mihashi. Mihashi is the ace of his baseball team that has been constantly on the losing side due to his poor pitching. This made his team to bully Mihashi that crashed his confidence levels. To get away from this Mihashi joins a Nishiura High school far away from his former team and the game.

Unfortunately in this new school he is dragged into the baseball team starting as a pitcher. In this new team Mihashi soon realizes he is accepted for who he is and this boosts his confidence and skills. Seeing his ability Takaya Abe, the catcher of the team decides to help him the ace of the team.

The main characters in both Haikyuu and Big Windup appear silly and weak, however when the times comes both of them surprises the opposing team.

My Hero Academia (Boku no Hero Akademia) is one of the recent popular anime in shonen field that is funny, action driven and is amazingly animated. The world of Boku no Hero is filled with 80% of people with “quirks”, a super power that is different for each individual. The hero of the series Izuku Midoriya is on among the remaining 20% of people with no powers.

Midoriya’s only dream from the very young age is to become a hero like his favorite super hero ‘All Might’ and help the people. It leaves him devastated when the doctors tell him that he can not manifest quirk, his dreams of becoming a hero slowly fades away.

However the fate soon makes him meets with his Idol All Might and inherits the quirks of him under strange circumstances. With his new found super power Midoriya enters the prestigious UA High School famous for super hero training program and along with friends learns what is means to be hero.

My Hero Academia is an anime like Haikyuu that aren’t sports based however, have every thing you loved in Haikyuu with an extra dose of super powers and action.