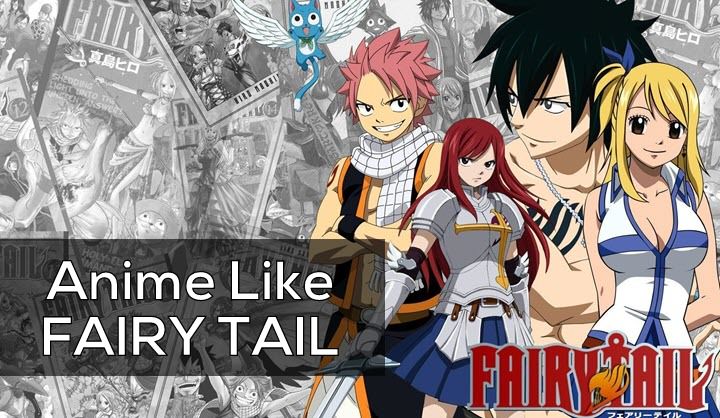 This Shonen anime, based on the manga created by Hiro Mashima (creator of Rave master, among other things) began to be written in 2006 and continues until the present time, with its popularity expanding well into the United States and Europe.

The plot tells us the story of Lucy Heartfilia who joins the Fairy Tail magicians guild where she meets Natsu, Gray, Erza, Happy and all the other members of the guild, where they experience hundreds of adventures where they use diverse magics to confront their various enemies.

The magicians, grouped in guilds, and identified with their own brands as tattoos, offer their services in exchange for money, thus making them normal workers. Even so, there are magazines with a lot of pull in which details of the lives of famous magicians are given, making them look like real stars, so it is a profession with a lot of prestige.

When looking for anime like fairy tail, we will be prioritizing Shonen anime with magic, adventures, comedy and a mix of varied characters involved. If you think we missed any similar anime like Fairy Tail that should be on this list, then don’t forget to mention them in comments below.

The so-called King of Pirates, Gol D. Roger, declared before being executed that his treasure, the One Piece, was hidden somewhere in the Grand Line. Behind his surprising words, the Pirate Age began. The seas were filled with pirate ships leaving with the aim of finding the well-known booty.

Twenty-two years after this fact, the plot presents us with Monkey D. Luffy, a crazy young man of strong convictions who leaves with the hope of getting the One Piece and thus become the new King of the Pirates.

Little by little, this boy, who keeps a rubbery secret, will be recruiting members of all kinds to his crew. A crew that will soon be known as the Straw Hat Gang. With over 920+ episodes and counting, fans who are looking for anime like Fairy Tail will no doubt enjoy this all time classic.

Hunter x Hunter summed up in one word is epic, a great Shonen that has a plot, characters, soundtrack, animation and epic, sad, dramatic and funny moments that are at the same level of quality as other Shonen as famous as One Piece or Naruto.

The story is about beings called Hunters, who are people that do any kind of work ranging from: Bodyguards, Bounty Hunters, Assassins among other things. Apart from that, the story of Hunter X Hunter tells the journey of: Gon Freecs a boy of 12 years, who learns that his father is a hunter and therefore abandoned when he was 2 years.

Gon clings to the idea of becoming a hunter to see just how interesting this work that made his father abandon him is. With so many characters, cool themes, awesome soundtrack, this Shonen will be a delight for people wanting more anime like Fairy Tail.

In Rave Master we focus on the conflict between the forces of darkness represented by the Darkbrings and the forces of light in the Rave. Haru Glory is a normal young man who by destiny is selected to search for the fragments of the Rave to confront the dark forces of the world, in a journey where he will experience many things and meet many friends and enemies.

The story itself could not be more standard within the category of the Shonen of early 2000 and late 90’s, however behind all the generic aspect there are small glimpses of a hidden gem.

Hiro Mashima from his beginnings has admitted that he follows the Toriyama style of Shonen that mixes humor with action and occasional drama, so this his first work is an attempt to mix those elements while he generates his own style. This from the creator of Fairy Tail is a must see for fans looking for anime like Fairy Tail.

4. Magi: The Labyrinth of Magic

The story begins with Aladdin, a ten year old boy, who comes to the surface for the first time. He was locked up since he was very young and until recently he had not known anything about the outside world. Aladdin starts his little adventure and travels around the world with his best friend Ugo. (Who is a Djinn, a kind of genius.)

On the way he meets Alibaba, a young man who wants to make a fortune to live comfortably and not have to work for anyone. But once he meets Aladdin, his life changes completely. Alibaba discovers that Aladdin has a strange power and thinks that with that power he could conquer the dungeon/labyrinth (Monuments that appeared in various parts of the world.

He who manages to conquer it will get wealth and power) and thus obtain his dream. But what Alibaba doesn’t know is that once he gets into that labyrinth his life will change completely, as well as Aladdin’s, who will discover who he really is.

Soul Eater is a pure Shonen anime, where the main goal is to be the strongest and beat the bad guys. Soul Eater mixes spectacular battle scenes, eccentric characters and quite a lot of fan service with a gothic imagery quite rich in grotesque or macabre details.

Although they seem strange at first, they end up forming a quite credible and surreal scenario, where the balance ends up in a point where you can accept the existence of witches and demons that must face the protagonists and at the same time you can live the most comical and light scenes of the anime.

The story follows Maka Albarn and his partner Soul “eater” Evans, two students from the Masters of Death Weapons Academy which brings together people who are capable of becoming incredibly powerful weapons.

Others are able to use those weapons with the goal of educating them and turning them into people capable of facing the threat of witches and demons, leading the characters to face their own fears and insecurities in the process. A must see Shonen anime for fans of anime like Fairy Tail.