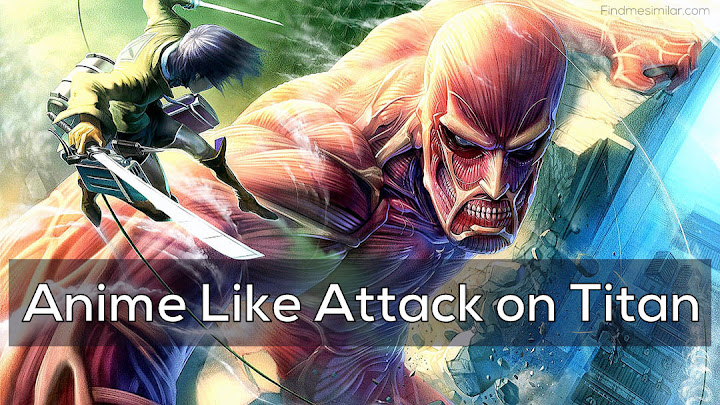 It tells the story of mankind in a Germanic era of the 19th century, struggling to survive during the attacks of giant humanoid beings called titans. The titans are dedicated to eating humans for pure pleasure.

Humans have become an endangered species. A new and terrible predator has appeared, the titans, beings endowed with few lights but of gigantic proportions that devour humans for pleasure, not for food, and that have decimated humans to the point of reducing them to a handful that live cowardly behind the high walls of a city. But suddenly one day a different titan appears: taller, stronger… and smarter. If the human race is to survive, there is only one way out: fight.

Anime like Attack on Titan (Shingeki no kyojin) are filled with adventure, overcoming great obstacles, the fear of extinction, very strong enemies and artistic yet satisfying arcs.

In this way, Claymore is a fantasy adventure set in a dark medieval context where humans are prey to demonic beings called Yoma. To deal with this, an organization will create half human, half Yoma warriors called Claymore, who can confront these destructive demons. The series begins by following our protagonist, Claire, a Claymore who travels from village to village on missions to eliminate Yomas for the organization.

The story takes place in a post-apocalyptic world, where humanity lives enclosed in cities surrounded by walls. Their threat is the Aragamis, monsters of different sizes and shapes that eat everything in their path. Humans can do nothing to stop them as they are immune to traditional weapons of war, over time the big cities are falling and humans are on the verge of extinction.

To defend themselves from them are the God Eaters, soldiers trained in the use of the God Acrs, the only weapons that can kill the creatures. As you can see, the premise is very similar so this is a great Anime like Attack On Titan.

Also Read: Anime Like The Rising of the Shield Hero

3. Kabaneri Of The Iron Fortress

The steampunk-style story of action and survival takes place on an island in a country called Hinomoto, where humans hide in fortresses called stations to protect themselves from the threat of steel-hearted, zombie-like beings called Kabane. Only the armored locomotives known as Hayajiro travel between stations.

People access the station’s goods and transport each other with the help of the Kōtetsujō, a steam-powered locomotive. One day one of these locomotives under the control of the Kabane crashes into the Aragane station and attacks the city. Ikoma, a young man eager to finish off the Kabane, sees an opportunity to use his anti-kabane weapon, the Tsuranukizutsu. I feel this Anime is more like a Clone of the Attack on Titan.

Tokyou Ghoul is the tragedy of Kaneki, our main character, who after being deceived by Rize, a ghoul, ends up being almost devoured by her. Thanks to mysterious events both of them will end up involved in a strange accident that will make Rize’s organs end up being transplanted to Kaneki.

It is at this point that Kaneki’s life begins to change, as he will begin to realize that it is impossible for him to feed on human food, being drawn inevitably to human flesh. He will inevitably end up knowing a world totally different from his own, the world of the Ghoul, a world in which he will have to learn to survive.

We have Tanikaze as the main character, a boy who for reasons unknown to us grew up hiding with his grandfather in one of the thousands – or millions – of corners in Sidonia.

After his grandfather’s death, he is forced to leave because of hunger, until he is “captured” but thanks to the captain of the ship and his grandfather’s influence he is admitted to the academy to be a pilot of Gardes, a fuse or robot that together with some special spears called Kabizashi capable of killing a gauna, will fight and defend Sidonia.