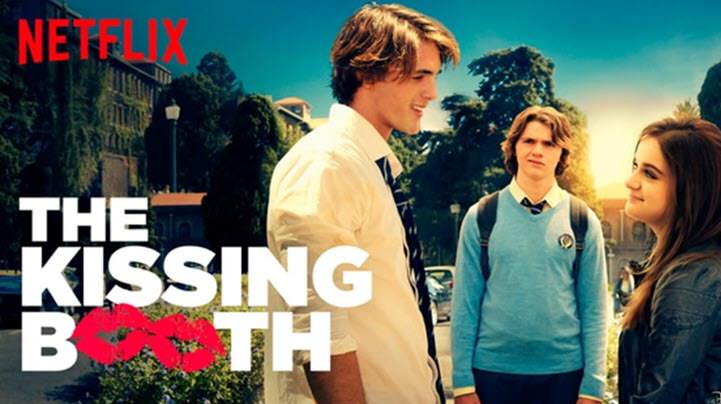 This film tells you the story of Elle and Lee, friends who have been friends since they were born, literally as their mothers were friends themselves. They essentially grew up together which made their friendship stronger over the years.

The whole drama begins when our friends are introduced as 16-year-olds and start a new school year. We are introduced to Lee’s older brother, Noah, who is quite handsome, the school’s popular football player, a typical cliché football player. To keep their friendship so strong and free of fights they have a set of rules, one of the most important ones being that siblings – or relatives in general – are out of bounds romantically, totally blocked, forbidden, denied.

From here, the plot is simple. Elle Evans has never kissed a boy and is in love with Noah Flynn, the older brother of her best friend, Lee. But because of their rules, she can’t date him. Now, they’re together in the kissing booth. What will she do?

This is a laid back romantic comedy aimed at a younger audience, so if you’re looking for movies like The Kissing Booth, you’re probably looking for something quite similar in tone and story, and this is exactly what we’ve compiled for you. If you think we missed any similar movies like The Kissing Booth that should be on this list, then don’t forget to mention them in comments below.

Bianca (Mae Whitman) is in her final year of high school, and her world is shattered when she learns that all her colleagues call her DUFF (Designated Ugly Fat Friend), compared to her more popular and beautiful friends.

With her world turned upside down, she dismisses the words of wisdom from her wise teacher and seeks the help of Wesley, a slippery but charming high school classmate, to help her get rid of the label DUFF forever.

At the same time, she hopes to get the attention of Toby, and find the confidence to dethrone the ruthless Queen of the Madison school, reminding everyone that no matter how they look or behave, they are all DUFF for someone else… and that’s totally fine. A fun flick for younger audiences looking for movies like The Kissing Booth.

Lara Jean has never had a boyfriend, but she has fallen in love with five different guys at some point in her life. In order to forget about them and close that stage of her life, she writes them some letters in which she tells them everything she likes about them and what she hates as well. The interesting thing is that she never sends them, that is to say, she writes them knowing that they will never be read, so she is as sincere as possible.

When Lara Jean starts school, her life takes an unexpected turn: her letters are no longer in her hiding place and have reached most of the boys, but, above all, they have reached Josh, her sister’s ex-boyfriend who is like one of the family and who spends the whole day at her house; and Peter Kavinsky, the boy who gave her her first kiss.

That’s when the whole mess begins with the revelations in the letters she had kept so secret and never intended to be revealed. Funny, surprising and quite romantic.

Maddy and Cole were inseparable friends until high school started and Maddy became the most popular girl on campus. Maddy has built her way to popularity over the course of four years of high school, and now the former best friends are on the opposite ends of the high school’s social spectrum.

But all of this is about to end unexpectedly when Marissa, Maddy’s best friend, steals her boyfriend. When Maddy’s reign ends abruptly, and she begins to feel lonely and heartbroken, the young woman reconnects with Cole, and the duo conspires to destroy the teen’s final popularity contest: graduation ball.

The modern version of the Shakespearean theme present in the taming of Scorpio. A beautiful but distant young woman, Kat, refuses any boy who dares to approach her.

The usual college parties which younger sister Bianca longs for it, are extremely boring for Kat. According to their father’s decision, Bianca cannot leave the house unless she is accompanied by Kat. Bianca and a few colleagues plan on taming her, by hiring a boy for Kat to fall in love with.

But their game will be taken seriously by Kat with interesting developments.

Naomi and Ely have loved each other and been together all their lives, even though Ely is gay. They create the no-kiss list, where you add the “forbidden” people. And everything works out fine… until Bruce the Second comes along.

They both end up falling in love with the same guy, which results in a messy break-up of the friendship between the two main characters. During their time apart, Naomi manages to realize that her dream of Ely falling in love with her and ending up as a couple is finally that, just a dream.

With the acceptance of Ely’s sexuality and the desire to have her best friend of so many years in her life again, she seeks him out and they reconcile. The theme of having rules of who you’re not allowed to date, just as in The Kissing Booth makes this a great alternative for anyone looking for similar movies to enjoy.

More movie recommendations if you enjoyed watching The Kissing Booth: