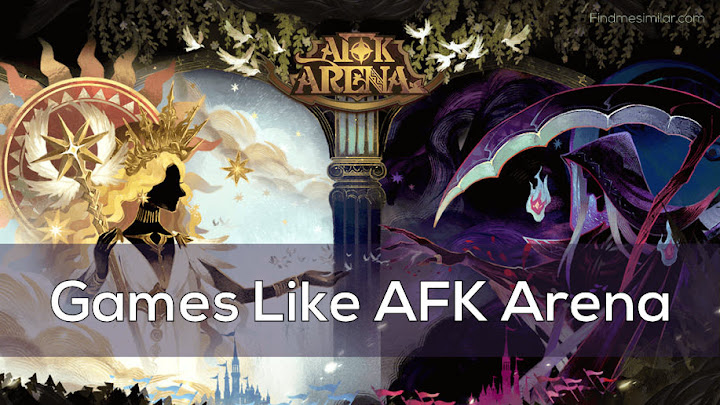 Developed by Lilith Games, a Chinese developer specialized in mobile games and available in both android and iOS, AFK Arena is a game with a very basic and very reused mechanic; half down game, half idle game, the goal is simple: Gather a team of characters, level them up, equip them with objects and defeat more and more complicated enemies.

AFK Arena offers us enough mechanics to fulfill its function of entertaining while you play even though its basic mechanics is the classic of the genre: rewarding you for not playing (welcome to 2019, that’s a thing now). Arena PVP, temporary events, challenges parallel to the game’s own adventure, guilds… the classics.

Games similar to AFK Arena are captivating RPG’s where you take a character(or characters) and develop them quickly and easily to fight more challenging encounters.

Idle Heroes is an RPG where you have to operate a bunch of heroes who have to face dark armies in the ancient ruins. Test your strategy skills and improve your characters’ abilities to become the most powerful team. You’ll start the game with a single character who will need to be assigned a number of elements to help him grow and become stronger.

In Idle Heroes you’ll not only have to fight the forces of evil, but you’ll also have to do so against other users and their group of characters. With over 200 character types, you can create a perfect set based on their abilities. This is a great alternative and our top pick in the list of Idle Games like AFK Arena.

Epic Seven is the JRPG mobile porridge that takes the best elements of their respective sub-genres and combines them to create a truly enjoyable and fun experience.

It follows the adventures of Ras, the warrior chosen by the gods to seal the terrible Archdemon, as he travels the world regaining his strength and assembling an army to fight the final battle. The companions you meet along the way will join your army and add their forces to your cause.

Destiny Child is a game that offers numerous systems, both in and out of combat, which both directly and indirectly affect your performance in each fight, as well as your enjoyment of each one.

Your units in this game are called Childs, and there are almost 300 to collect. Each of these characters has unique skills that set them apart from the rest. However, all the units have two things in common: their elements, and their roles.

Dragalia Lost is a role-playing game developed by Cygames and Nintendo for mobile platforms. The game takes us to Alberia, a kingdom where dragons reign over all of nature and the royal family has the ability to change its appearance.

The adventurers are divided into four main types: attack, defense, support and healing. The weapons and skills, in turn, will offer different advantages and disadvantages for the battle.

Another Eden is an RPG that begins by embarking on a journey through time and space and in which we must save our lost future. This way we get into a game that has a very manga style, full of color and with more than well designed characters.

Another Eden is one that has quality details like that world that opens up in a very different way. That is, we explore ourselves in a side view, but we can always “climb up” to bring the background to the foreground, and so all over the map that we’ll have at the top of the screen so we don’t get lost.