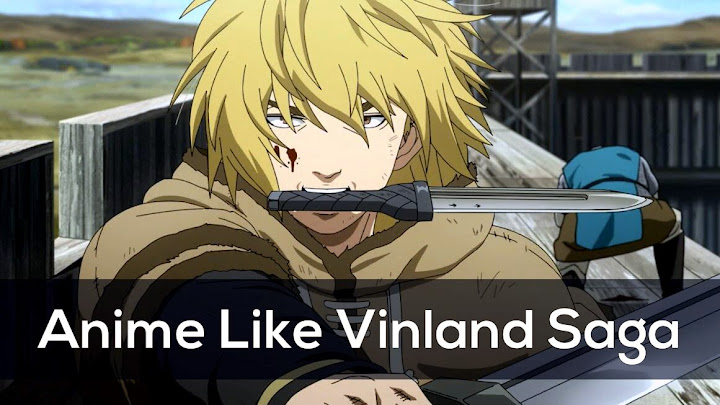 The Vinland Saga is an anime of the historical seinen genre in which Thorfinn, son of a powerful Viking named Thors, swore to avenge his father after he died unjustly in a duel at the hands of Askeladd, commander of a dangerous Viking band. But to confront him he has to fulfill a series of tasks that range from being his messenger, kidnapper, assassin and even getting involved in the war for the crown of England.

Will he be able to accomplish his goals? One of the things you should know if you plan to see this anime is that it is based on several Icelandic sagas (oral traditions written after their Christianization), among them the “Flateyjarbók”, “The Saga of the Greenlanders” and “The Saga of Erik the Red” in which the first one contains stories of Nordic kings written between 1387 and 1394 as well as other material such as the titles mentioned above.

When looking for anime like Vinland saga we aimed to find series that have similar themes, with historic tones and interesting intrigue for its main characters.

Berserk is presented to us in a medieval time where humans, blinded by a thirst for blood and power, subjected their lives to the barbarism of endless wars. The story recounts the life of our protagonist Guts, from his birth as a young mercenary to becoming the dreaded “Black Swordsman”; the executioner of demons.

Kentaro Miura, the creator of Berserk, gives us a cruel and inhuman world, a real hell on earth where endless battles, darkness, suffering and bloodthirsty demons coexist every day with our main protagonist condemned to a bestial life defying death. This makes it a perfect choice for someone looking for Anime like Vinland saga.

This amazing Anime is about Arslan – the heir to King Andragora, the fierce emperor of the great empire of Pars, which he won through bloody combat. Unlike his father, Arslan is a fragile boy, without much skill in battle or weapons, who enjoys getting out of the palace and walking around to get to know the reality of his people.

However, Andragora’s reign will end untimely after the invasion strategies of Lusitania – the enemy country – are successful. In the midst of the fierce battle, the heir to the throne, Arslan, and his faithful protector Daryun, manage to escape the terrible fate that awaited them.

The young prince will thus begin his long journey to regain his kingdom, an adventure that will involve not only adding followers to his cause, but also a journey of personal growth and finding a motivation for wanting to be a good king.

Kingdom is a historical fiction anime set in the Chinese historical period of The Fighting Kingdoms, which began sometime in the 5th century B.C. It was a period of great battles, great political problems within each kingdom and complex diplomatic problems aimed at seeking greater power.

Kingdom narrates this stage, with its own fictional inventions but also based on real historical facts and characters. It follows the story of the war orphan – Xin – who fights to become the greatest general under heaven and who fights under the command of the Qin kingdom and its young emperor, and soon to be great friends, Ei Sei. Both fight to achieve the unification of China.

Xin, from the battlefields, knowing the cruelty and adrenaline of war and Ei Sei within the treacherous royal courts. Both stories are interrelated and make Kingdom an anime that provides an excellent form of entertainment within the genre of military action.

The story of Shingeki no Kyojin takes us back to a time when mankind was on the brink of extinction due to the existence of the Titans. These seemingly unintelligent giants are intended to devour humans, even though they are not needed to survive.

The few survivors have built three walls higher than any titan, where they live peacefully without fear of being devoured by the giants. Humanity has lived peacefully for more than 100 years until in the year 845 a titan taller than the walls built to protect itself appeared out of nowhere and created a gap in one of them allowing all the titans to break through.

At that moment, humanity is reminded that they live in fear of being devoured by the titans.

When his lands were struck by plague and famine, the feudal lord Daigo Kagemitsu decides to make a pact with twelve great demons in order to save his lands and thus maintain his ambitions to dominate all of Japan.

In this way he sells the life of his son, who is born without limbs, skin or facial features but for some reason is still alive in his condition, surviving even being abandoned to his fate.

Several years after this incident, the young orphan Dororo meets the mysterious swordsman Hyakkimaru who uses modified combat prostheses to hunt demons in search of those who have the missing parts of his body. Thus beginning a journey that will teach them about ambitions and what makes us human or monsters.