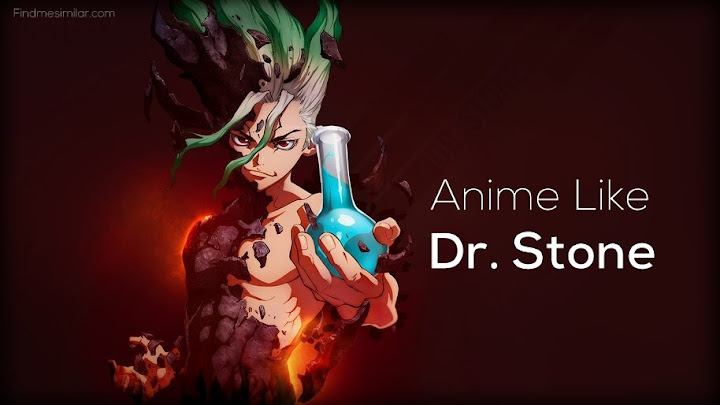 The day that Taiju, a strong but somewhat redneck teenager, finally decides to declare his love for Yuzuriha, something radical and unexpected happens: just a second before the declaration, unknown causes generate an intense flash that leads the whole of humanity to instantly turn to stone.

After thousands of years, during which he has struggled not to lose consciousness, Taiju finally emerges from the stone and returns to normal. He discovers that the rest of humanity never woke up except for his friend Senku, a genius with a scientific vocation and a much more pragmatic mentality.

Together, they find a formula to bring back to life many of the statues that have not been broken to pieces over the centuries. When presenting anime like Dr. Stone, we looked for similar stories with smart protagonists, many of them scientists, trying to survive in difficult conditions. The themes are science, fiction, education, utopia, survival.

The earth is about to suffer the collision of a meteorite, which may end the planet. Therefore, a group of scientists begins to implement a program for the survival of humanity around the world.

Each country will designate five groups of survivors, in the case of Japan: autumn, spring, winter, summer A and summer B, each group will be made up of 7 people: children and young people of different ages with some special quality.

The chosen ones do not know what they are, so the series starts when some children and young people wake up from some capsules and find themselves in a hostile environment. Little by little they will have to learn how to survive by themselves. This is our number one choice for Anime like Dr. Stone which you will definitely enjoy.

This story takes place in the 22nd century, when humans no longer inhabit the planet Earth, which is irremediably damaged by pollution. Humans live on artificial satellites or other planets. The prevailing technology allows interstellar travel and therefore space exploration.

In spite of this, any encounter with another type of intelligent race is void. Here we meet Luna at 14 years old, who along with schoolmates gets lost in a gravitational storm.

They are taken to a planet of similar conditions to the Earth, with the only difference being that this place lacks intelligent life – and the creatures are hostile. They have no choice but to join forces and best cope with such a calamity.

This series tells us about the adventures and misadventures of two of our protagonists: The red blood cell AE-3803 – the main thread of the adventure – and a white blood cell U-1146. Likewise, in each chapter we are faced with a problem that can range from a cold to the appearance of cancer cells, which will also involve the introduction of new cells (characters) that will enrich the cast and win our hearts.

Although the series takes the format of a narration of particular stories that will involve the characters depending on the case treated, not providing a complex linear proposal, the characters and the cases narrated become pleasant, funny and ingenious.

How do our cells work in different scenarios? The series answers this question through an approach that makes good use of comedy and action, which makes, for example, the elimination of a bacterium entertaining or the elimination of cancer cells a bloody shame.

The story opens with an infant cast. The children’s goal is to escape from the orphanage because of the dark secret it holds.

The viewer can feel identified with the objective, even though it seems impossible, and wants to know if the protagonists will manage to escape despite all the obstacles they will encounter along the way. The three protagonists are marked with opposing personalities and beautifully carry the story forward.

The leading trio is made up of the children with the best intellectual qualifications in the orphanage: Emma, Norman and Ray, each with different motivations to be able to escape.

The story begins with 9 students who travel to the planet McPa to make a school camp but when they arrive they are absorbed by a sphere that transports them far away from their home and in the middle of space.

These pupils have to fight and work together to try and get home and find out why this has happened. A story that is full of mystery, tenderness, very interesting and current themes, rawness and special characters that are, without a doubt, one of their strong points.

The objective is clear, to survive and to return home. Another great watch for anyone who wants Anime Like Dr.Stone.

More anime recommendations if you enjoyed like Dr. Stone: