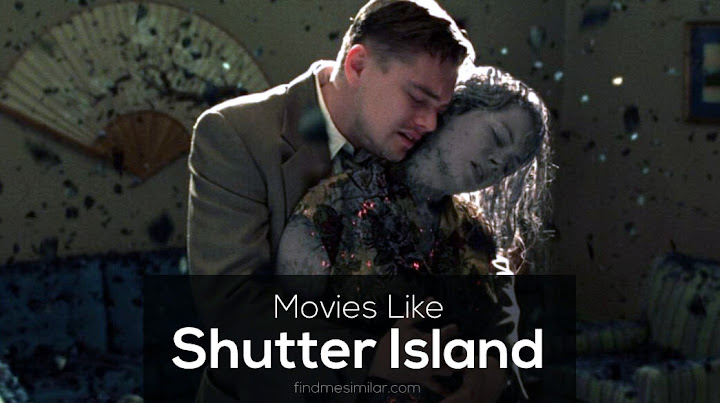 Executor of the Federal Law Enforcement Agency – US Marshals, Teddy Daniels arrives with his partner Chuck on the small island of Shutter, where there is a hospice for treating convicted persons with mental disorders. The two are investigating the escape of a criminal, but nothing in this hospice is what it seems. Neither is Teddy Daniels.

Is he there to find a missing patient? Or was he sent to investigate rumors denouncing extreme practices of treating the sick? As Teddy and Chuck get closer to the truth, it’s getting harder and harder, and the two are starting to fear they’ll never leave Shutter Island again. Because someone is trying to make them lose their minds…

Movies like Shutter Island involve a deep dive into the psychological mind, and explore mysteries, drama while offering breathtaking twists and turns. Also, the main character might not always be who they seem.

Dom Cobb (Leonardo DiCaprio) is a skilled thief, the best in the field of the dangerous art of extraction, meaning the theft of precious information and secrets from the subconscious of people while they dream, when their mind is most vulnerable.

Cobb’s rare ability gave him a highly sought-after professional status, invaluable in the complicated world of technology espionage, but at the same time he lost everything that was most important to him and turned him into an international fugitive. . Now he is given a chance to recapture everything he has lost: a final mission could restore his life beforehand if he does something impossible, the opposite of extracting information: implanting them in one’s mind.

Is it all real? Like Shutter Island, a lot of things are left up to the viewer to decide, in the end.

A young FBI agent, Clarice Starling is charged with investigating a particularly difficult criminal case, “Buffalo Bill” a cunning killer who produces a series of crimes, the latest of which was the daughter of an American senator. The victims of the murdered criminal are women, from whom he, for unknown reasons, detaches pieces of skin. Because in her investigations, the agent makes no progress, she will resort to an unusual tactic. In solving the case, he will seek to use the knowledge of Hannibal Lecter, a dangerous criminal who devours his victims.

The psychopathic criminal Hanibal, who is a psychiatrist by profession, can be transposed to the situation of the murderer and foresee his actions in the future. Fate makes him the only one who has relevant clues about the psychopath at liberty, nicknamed the Buffalo Bill because he used to rape his victims. A knife-edge fair is set between the fragile Jodie Foster, playing an ambitious young FBI agent and the obsessed monster, though they both know they can’t trust each other. Whose mind is stronger?

American Psycho is a powerful social satire that reflects on the rapacious urban life of the late 1980s through the eyes of a serial killer, forcing the audience to penetrate his troubled mind and understand the motivation behind his actions. A superb specimen, who seems to have all the qualities of a young “master of the universe”, Patrick Bateman (Christian Bale) appears as a perfect character, at least as “perfect” as those around him. The more he strives to fit in, the more he gets lost in the crowd.

Eventually, he becomes the perfect example of an amoral society. The film is inspired by the eponymous novel by Bret Easton Ellis, perhaps the most controversial 1980s novel in the United States. The actions of Bateman, the main character, frightened readers and aroused critics who protested against the dark tone and violence not only free, but also extremely visual.

An amnesiac man who can no longer remember recent events, uses notes and tattoos to track down his wife’s killer.

The amazing and anthological sequence from the beginning of Memento involves a murder and a Polaroid with a corpse. The photo slides back into the room, the bullet is absorbed into the gun barrel and Leonard, the main character, begins to live the other way around. It is said that memory is one of the key elements that separate humans from animals and that it is an essential part of the human condition. The entire film is so constructed that it reflects the mental state of the main character, while giving the viewer the right to their own perspective.

The reminder is not just an inspired premise. In short, it is a film noir in pure classical tradition, a mystery thriller: a man who cannot remember recent events, has a revenge and is drawn into the place of a flawless and relentless femme fatale.

Jersey Island, 1945. The war is over, but Grace’s husband (Nicole Kidman) has not returned from the front. Alone in a massive and isolated Victorian house, she raises her children in a severe religious spirit. Both children suffer from a strange disease: sensitivity to light, so the new servants are forced to obey a strict rule: the house must stay in the semi-darkness; no door will open until the other door is closed.

But soon this rule will be violated. Grace, the children, everyone else around will face something terrible and fatal.