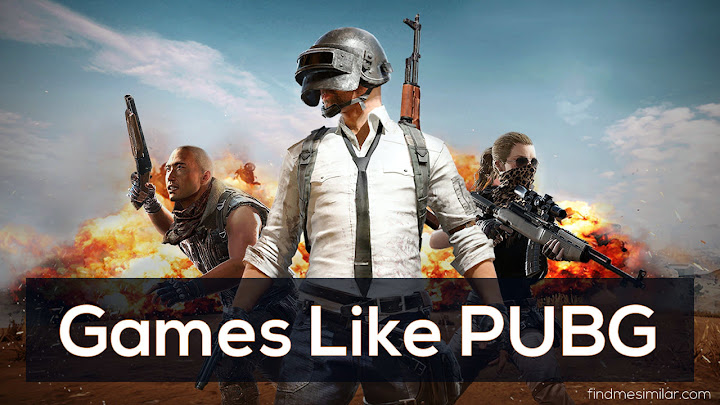 PlayerUnknown’s Battlegrounds (PUBG) is a massively multiplayer shooter game that is developed using community feedback. Starting from scratch, players must fight to locate weapons and assets in a battle to be the ultimate survivor. This realistic game is on a massive island of 8X8 KM, with a level of detail that shows the capabilities of the Unreal Engine 4 graphics engine.

PlayerUnknown, aka Brendan Greene, is a Battle Royale pioneer. From creating the ARMA 2 DayZ MOD and later the acclaimed ARMA 3, Greene collaborates on PUBG with the veteran team from Bluehole to create the most diverse and robust Battle Royale experience to date.

When looking for other cool similar battle Royale games, we included those that capture the essence and experience players enjoy when playing PUBG – from map exploration, to weapon variety, vehicles, customization and popularity.

Fortnite is likely the most popular alternative to PUBG, and it consists of two game modes. The older one is called “Save the World” and is a PvE shooter in which you mow down zombies as a team of four. Fortnite Battle Royale is the younger and more successful part of the test. So when we write about Fortnite, we always mean Fortnite Battle Royale.

The game was born about as a reaction to the big Battle Royale hype and it quickly became one of the most played versions of this type of game. With up to 99 other players you fly down to an island at the beginning of the game. Where exactly you land is up to you. In larger areas there is more loot, but also a higher chance to meet hostile players. And if they catch you, that’s it. Extralife and Respawns don’t exist, the last survivor wins the match.

We can build houses, ladders, stairs, and use our imagination to trap, hunt or escape from opposing players. There is a cool variety of weapons to choose from, and the graphics are top notch!

Creative Destruction is a good starting point to compete with the more famous PUBG and Fortnite, because despite being born recently is really very nice for the simplicity of commands, graphics and high level of customization.

Among the game modes we find the regular classic mode of battle royale divided into single, duo, teams or group of fire, are also available in timed modes. We will also find a training mode to train against bots and we could also create our own rooms to play with friends only.

The building part is easier, with a quickbuild option making things easier, and only once resource to gather. The fun is endless.

Battlelands Royale says it all from the title, quite explicit in terms of genre reference and inspiration. Yes, it’s just another battle royale, although in this case created specifically for mobile platforms and therefore characterized by a particular style.

Battlelands Royale manages to capture the central elements of the battle royale canon but making them more fluid and dynamic, built on a control system and an interface that are created specifically for the touchscreen and the difference is felt all in the middle of the game.

The mechanics are the same: you are thrown from above into a large map with the explorable area that narrows progressively. In the meantime we have to collect weapons, ammunition and defenses and prepare for clashes with other players, which with the constant reduction of the passable area begin to become more frequent.

The last one standing won. In short, it’s the original concept of Playerunknown’s Battlegrounds, stripped of the crafting elements that made Fortnite famous, but for this reason it’s particularly fast and intuitive even for shorter and more frequent matches.

The developers of masterpieces like WarZ, Infestation: Survivor Stories, Romero’s Aftermath and Shattered Skies have decided well to reuse material from the old games to create the awesome Last Man Standing, a new Battle Royale that tries to retrace the successes of H1Z1 and the recent Playerunknown’s Battleground.

If the titles just mentioned have been successful for a reason there will also be, H1Z1 can easily be defined as the creator of the genre while Battleground has improved it with a graphics department worthy of note, excellent feedback in the ballistics system as well as having introduced various classic goodies of products cured (the automatic covers are the best example).

Catapulting us into a world of ruins, the Last Man Standing takes all the glory.

H1Z1: King of the Kill is a pure manhunt trying to stay alive for as long as possible multiplayer game. The graphical interface has been completely revised and, at the beginning, you can see the character and, in preview, all the equipment collected and those that can be obtained.

Some pieces of equipment can be found in the crates that the game occasionally gives you when leveling up or achieving some specific goal, or, spending real money to buy them in the store set up by Daybreak. The game has been divided into leagues: bronze, silver, gold, platinum, diamond and royalty and, at the beginning of each competitive season, you will have to make 10 games of placement to be placed, depending on the score, in the most suitable league for you.

To score as many points in a game and climb the ranking you will have to resist as long as possible and kill as many enemies as you can. The game also gives you the opportunity to participate in special games with unique rules that usually take place on weekends.