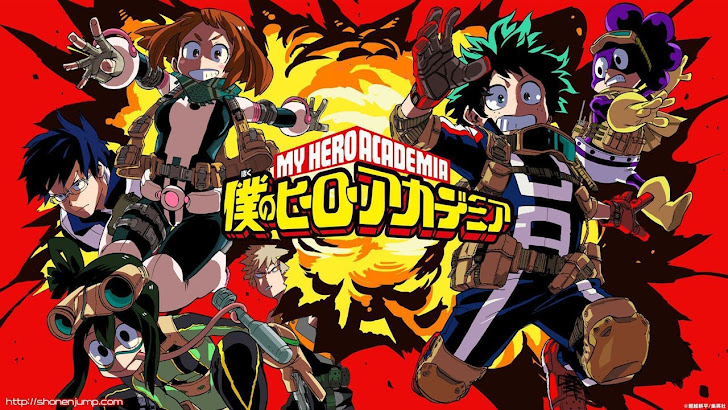 Funny, with exciting fights and wonderfully animated, My Hero Academia (Boku no Hero Akademia) is certainly one of the biggest and most important news in the Shonen field of recent years, which we are sure will not disappoint the expectations of lovers of the genre.

Translating Kohei Horikoshi’s manga into souls, Bones and Kenji Nagasaki have been able to keep alive and pulsating the action world of My Hero Academia, populated by Pro Heroes and villain, all since the advent of the Quirk, the superpowers.

This proves to be an excellent history of origin for our future professional heroes, divided into three great narrative arcs. The range of characters is then really heterogeneous and well balanced, so as to give the right room for maneuver to the protagonist and mentor All Might without forgetting the remaining “students”, each with their own dreams and ambitions.

When looking for anime similar to My Hero Academia, we looked for anime with young characters, superpowers, underdogs and cool storytelling.

Serialized on the manga magazine par excellence since 2015, Yuki Tabata’s work has climbed the charts one place after another, in 2016 it received an anime adaptation that continues today and the appreciation of the public for Black Clover grows month after month.

The plot is very simple. There’s a fantastic setting where everyone can use elementary magic and two orphans raised together in a convent who are immediately friends/rivals. One is Yuno, tall, handsome, endowed with great magical powers, intelligent and mysterious; the other, the protagonist, is Asta, short, obtuse and without a bit of magical power.

The dream of both is to become the Wizard King, the most influential, strong and prominent figure in the entire kingdom of Clover in which they live. If for Yuno the way to become first a Magical Knight and then an Emperor always simple, for a young man without magical powers as Asta it is a mountain to climb. However, Asta has the strongest magic of all, the will to never give up.

Yusei Matsui managed, in Assassination Classroom, to mix the school ingredients, dear to the Japanese animated tradition, in order to obtain a completely new dough.

In a Japanese middle school, there is a very special teacher who gives lessons using unconventional methods. The teacher in question, in fact, has an alien form and teaches the art of murder (seen? just wait a little longer!).

Why should a teacher in a Japanese middle school teach murder? Of course, to be able to be, one day, killed by their students!

Over the years we’ve been used to various stories about the end of the world and its consequences, imagining what might happen next. Atsushi Ohkubo has also embarked on this feat with his most famous work: Soul Eater. The author, in fact, imagines a world torn by chaos and a humanity overwhelmed by madness, guilty of ruin are demons called Kishin.

To prevent the terrifying creatures from returning and threatening mankind, Shinigami, in the city of Death City, founded the Shinigami School of Specialization for Weapons and Arms Masters, simply known by the name of Shibusen, considered by the headmaster more as an organization that trains young warriors. These are the foundations on which the Ohkubo universe is built.

In Katekyo Hitman Reborn! we meet a boy, Tsunayoshi “Tsuna” Sawada, called imbrana-Tsuna. He’s a good-for-nothing with no particular talents, a bit of a donkey at school, who suddenly finds himself a candidate to become the boss of a mafia family, the Vongola.

Now you ask yourself: how can a guy like him be the only candidate in command of one of the most powerful families of organized crime? That explains it all. Tsuna’s great-great-grandfather and founder of the family had retired to Japan, while the other candidates to take over the reins of command had perished in tragic circumstances.

Henry, one of the most reliable of the tenth generation, was killed in the middle of a dispute; Maximus, the second heir, was drowned; only the bones of Frederick, the third-born, the beloved one, were found. So Tsuna finds himself the only candidate to become a boss.

Akko has been fascinated by magic since she was a child, when she witnessed a show by the sorceress Shiny Chariot. So she decided to enroll in the Luna Nova school of magic, a prestigious academy with a glorious but decadent past.

Magic is disappearing from the world and witches are out of fashion, so much so that the academy now accepts inscriptions even from ordinary people who do not descend from families of witches. During the lessons, Akko will discover, despite his enthusiasm, that he is not at all capable of magic and that he has difficulties even with the most banal spells.

However, the Shiny Rod, an ancient stick that is the key to restoring to the world the magical power of the Grand Triskelion, sealed by the ancient Nine Old Witches in the Arcturus forest, seems to have chosen her as its owner.