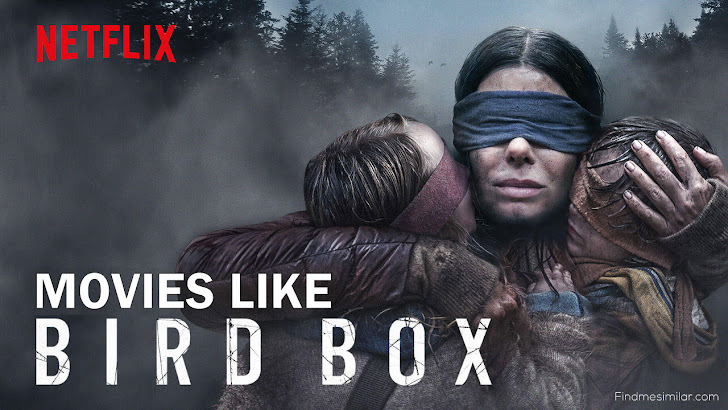 Bird box is a 2018 post-apocalyptic horror thriller based on a 2014 novel of the same name by American writer and singer Josh Malerman. Directed by Susanne Bier the film follows Malorie Hayes (Sandra Bullock) who must find a way to protect herself and her children from unseen supernatural adversary. Just a look at these unseen adversaries can make anyone suicidal and one must abandon the sense of sight outdoors in order to survive this phenomenon.

We see her story shuffling between the present time with her children and the 5 years prior when when she is pregnant and the supernatural phenomenon started. Malorie and her children are set out for a journey in a boat blindfolded hoping for a safe sanctuary.

If you are in love with this psychological thriller and are looking for more similar movies like Bird Box, check out the below recommendations of films that have one or more aspects of the film such as Dystopian world, gripping story, supernatural force, survival drama, etc.

When I think of movies similar to Bird box, A Quiet Place (2018) is the first film that crossed my mind. This movie too is set in a post-apocalyptic world filled with blind alien creatures with ultra sensitive hearing ability that will kill you if you make any sound.

Like how the surviving characters in Bird box must abandon their sense of sight, the people here must avoid making any noise in order to survive. Both these movies have very gripping stories with many similar themes.

The Mist is a 2017 thriller movie based on Stephen King’s 1980 book of the same name. Thew movie follows David and his son who are trapped in an supermarket with other citizens when their town in engulfed in a thick mist that also brings bloodthirsty creatures which will kill any one in their path.

The Happening by M. Night Shyamalan is another movie that came across my mind when I thought of similar movies like Bird Box. The story follows Elliot Moore (Mark Wahlberg) a high school teacher who along with his wife and his friends daughter tries to escape an mysterious plague that causes anyone infected to commit suicide.

I hope the above synopsis of the movie is enough to see why this movie (even though got mixed reviews) to be on this list.

The Road is another movie that is set in an post-apocalyptic dystopian world that follows a father (Viggo Mortensen) and his sons journey through the wasteland filled with dangerous group of cannibals. They must scavenge the world for supplies avoiding the cannibals in order to find a safe environment.

Instead of mother and her children’s journey through post apocalyptic world like Bird Box, this movie is a journey of Father and son duo in the dystopian wastelands.

It Comes at Night is an 2017 psychological horror thriller where the world is ravaged by an unnatural threat leaving only a few survivors. The movie follows Paul and his family (wife and son) who secluded themselves in a secured home deep in the forest to be safe from this unnatural threat. However this changes when another family arrives seeking refuge in their home.